Can the Monuments Men Save the Art History Major? 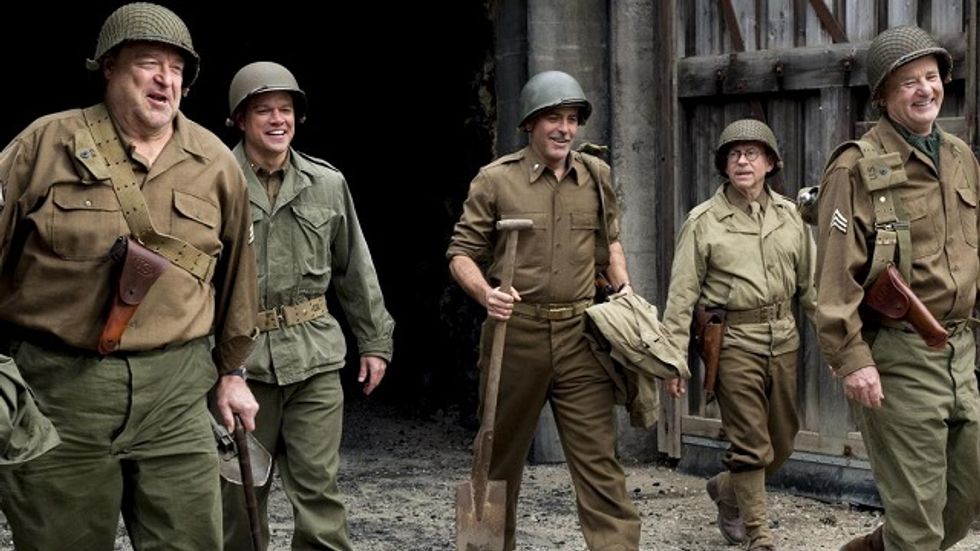 During his recent State of the Union Address, President Obama went for a cheap laugh line by questioning the value of an art history degree. Although he later half apologized, Obama stuck by the well-worn argument that if something doesn’t have immediate economic value, then it has no value at all. The President’s timing seems poor considering the recent release of George Clooney’s new film, The Monuments Men, which tells the story of how some members of “The Greatest Generation” were not only also art history majors, but also contributed to the preservation and restoration of civilization after World War II. That State of the Union joke reminds us that the battle for the humanities’ place in society goes on. The Monuments Men saved Europe’s art treasures from the hands of Hitler, but can they save today’s art history major from irrelevance?

Clooney, who directed, co-wrote, co-produced, and stars in The Monuments Men, relied heavily on the work of Robert M. Edsel, whose book The Monuments Men: Allied Heroes, Nazi Thieves and the Greatest Treasure Hunt in History masterfully recounts the forgotten story of the Monuments, Fine Arts, and Archives program, an Allied forces program that brought together art historians and museum professionals to counteract the cultural looting of Europe’s great museums by the Nazis and to advise Allied forces during the invasion of “Fortress Europe” to protect treasures in the war zone without endangering military lives. Judging from clips, part of the comedy of the film (which I have not seen, thanks to an ice-storm-related power outage at the theater holding the advance screening) comes from the unlikely appearance of art historians in battle. But, as Clooney’s character, Lt. Frank Stokes, points out, Hitler wanted not only to erase whole races from the face of the Earth, but also any cultural traces of those races, whose art he considered “degenerate” in comparison with “pure,” “Aryan” art. The architects of the Holocaust hoped both to kill the Jews as well as kill all memory of Judaism—a murder of both 6 million people and 3,000 years of tradition.

People seem to be confusing the quality of Clooney’s film with the merits of its cause. A quick taking of the critical pulse over at Rotten Tomatoes finds that people either love The Monuments Men or hate it. Curmudgeon critic Philip Kennicott over at The Washington Post begins his takedown of the movie by announcing that “[i]f you care about art, you are obliged to loathe the film.” Kennicott dismisses Clooney’s effort as an oversimplification of the story that relies so heavily on cliché that the whole structure comes tumbling down. (Kennicott also managed to fit into his busy schedule this week a bruising of classical composer Benjamin Britten as too minor to be major.) I see Kennicott’s point about how a film can oversimplify a book, but I’m not sure why this case disqualifies The Monuments Men in a way that it doesn’t for so many other oversimplified film adaptations. Perhaps Clooney does “tell” more than he “shows,” but do you really need an art history degree to understand that art matters?

If you want the full story of The Monuments Men, read Edsel’s book. Perhaps the film will inspire many to read the book who never would have considered reading it before. Of course the film cuts creative corners—some of the “Monuments Men” were women, Allied soldiers also looted art, and events scattered the real-life “Monuments Men” across half of Europe to make the superhero-style team-ups in the film unrealistic—but the core message of what these men and women accomplished with their art history educations and backgrounds remains true. The forces of good fought the forces of evil on many fronts in World War II. One of those fronts largely forgotten remains the cultural front—a battle begun by the Nazis and their dream of cultural erasure and rewritting. Allowing Hitler to win even that one crucial battle might put into question the meaning behind all the other, higher profile victories.

The best of all possible outcomes for the art history major stemming from The Monuments Men would be something like the “CSI effect”—the phenomenon in which the television program CSI: Crime Scene Investigation inspired a whole generation of young people to enter the scientific side of law enforcement. Maybe young people would see how art historians can be action heroes, too. Noah Charney, foremost expert on the history of art theft, recently pointed out that there are still Monuments Men and Women working alongside the U.S. military in Iraq and Afghanistan by profiling Dr. Laurie Rush, “the Army archaeologist,” so real-life examples are easy to find. Clooney’s already finding himself being asked art history questions (specifically regarding the return of the Parthenon Marbles to Greece) during his PR tour for the movie, as if he were a real art historian and not just playing one. Separating fact from fiction regarding The Monuments Men will happen soon, but the reality of the value of the art history major needs to happen even sooner. Art history isn’t facing a Hitler-sized threat right now, but it does need to assert its role as a vital part in the preservation and restoration of civilization around the world before it becomes nothing more than a punch line.

[Image: A scene from the film The Monuments Men.]