Truth is stranger than fiction. Especially if that truth is caused by fiction. Consider the strange case of Agloe, a place name that started appearing on maps of New York State in the 1930s.

An insignificant little fleck, Agloe was shown somewhere in the Catskills, at the junction of an unnamed country road with NY 206, just about where that state route crosses Beaver Kill. Both the stream and the route are tributaries of larger arteries: just to the south in Roscoe, they meet the Willowemoc Creek and New York State Route 17, respectively.

But Agloe was fake – a deliberate fake. The toponym was scrambled from the initials of Otto G. Lindberg, the director of the General Drafting Company, and his assistant Ernest Alpers. The mapmaking company was putting together a road map of New York State, and wanted to make sure that all its hard work wouldn’t just be copied over by its competitors. 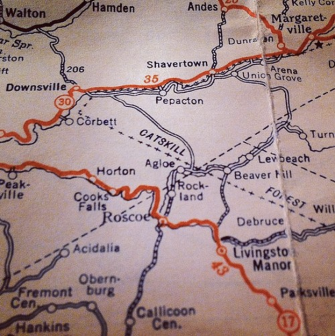 Mapmakers had been wrestling with this issue for centuries, but the problem had grown more acute as cartographic precision increased: How do you prove someone stole your map, if that map accurately reflects reality? The answer: add fantasy! Mapmakers had been able to take their competitors to court by pointing out fake places (a.k.a. paper towns) on their maps that were copied from their original work! For this reason, fictitious roads are often called trap streets: because they entrap the company copying them onto their own maps.

Of course, the mapmaker won’t invent busy thoroughfares or large towns. Not only would this be more easily discovered by the competition, it would also confuse the unsuspecting map-reader. Better to use tiny dead-end streets for these phony map entries, or small, out-of-the-way hamlets. Like Agloe.

A few years after publishing its New York State map, the General Drafting Company spotted Agloe on a map by Rand McNally, one of its main competitors. Aha, thought Lindberg: caught red-handed! Except that Rand McNally protested its innocence in a very convincing way: it had obtained the coordinates for Agloe from county records. Those records showed that on the once empty spot marked Agloe by the General Drafting Company now stood… the Agloe General Store. A real one!

It soon turned out that the store had taken its name from a map by Esso, one of GDC’s clients. In an absurd circularity, the fake toponym inserted onto the map to catch cribbing competitors had become real, thereby stripping it of its only function. On the other hand, by becoming an actual location, Agloe made sure that the map was entirely truthful again – even more correct than the mapmakers had intended.

Turn to Google Maps, and type in Agloe: an arrow still lands in the spot where Messrs. Lindberg and Alpers placed it, long after the general store there has gone. And long after the General Drafting Company itself has gone. Once one of the ‘Big Three’ in road map publishing, the company was absorbed into the American Map Company in 1992 and its state maps amalgamated with that company’s catalogue. Ironically, its only lasting legacy is that intentional, sneaky, but ultimately self-perpetuating mistake – Agloe. 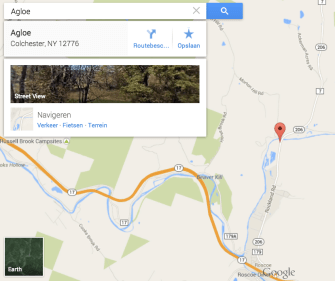 A persistent, and persistently unsubstantiated rumour has it that there is a trap street on every page of the London A-Z. I once thought I found one, but upon inspection, it turned out there really is an Elvis Road in Willesden (right behind Willesden Green tube station, just off Lennon Road and Marley Walk). Does anyone know of any examples? 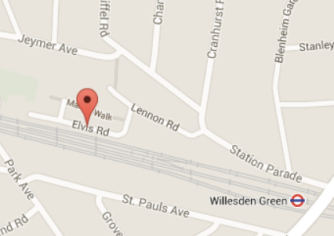 It turns out it’s hard to make work at an Amazon warehouse fun.
Up Next

The Trouble with Darwin

Biologists are, by and large, painfully aware of evolutionary theory’s shortcomings.