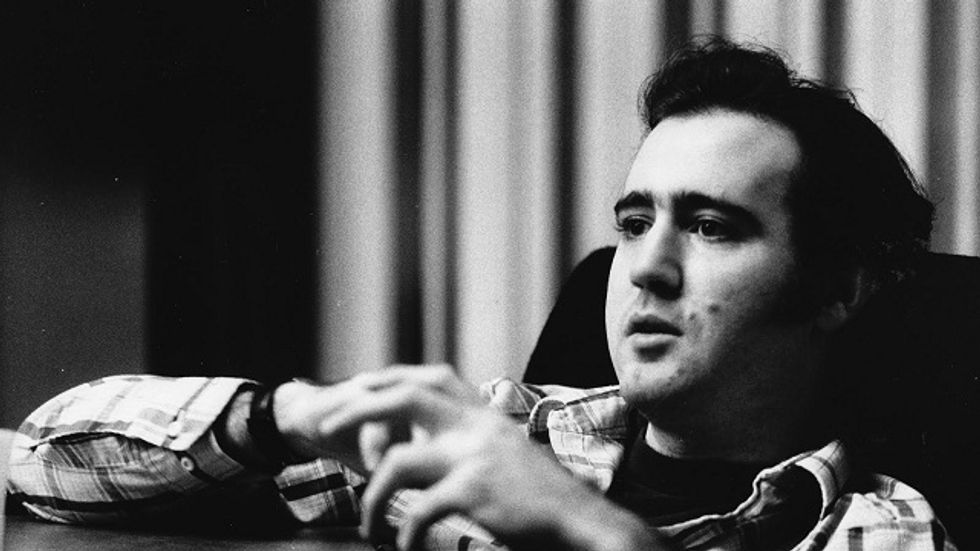 Like many Americans of a certain age, for me, Andy Kaufman (shown above) was first, and in some ways forever, Latka Gravas, the lovable garage mechanic with the endearing misuse of English and disturbing multiple personality disorder on the award-winning sitcom Taxi. Kaufman overruled his instinctual dislike and distrust of the sitcom format in hopes of wider success, which he soon enjoyed, but at the price of typecasting, which he forever fought against. On Creating Reality, by Andy Kaufman, an exhibition running through February 16th at Maccarone in New York City, tries to rewrite the reality of the Latka-izing of Kaufman by presenting Andy’s full oeuvre in a manner as individual, unconventional, and perhaps cringe-inducing as the man himself, whose claim to genius beyond comedy seems to be finally catching up with him nearly 30 years after his death. With this exhibition, perhaps it’s time to ask whether Andy Kaufman was America’s greatest performance artist.

On Creating Reality, by Andy Kaufman gathers together the artifacts and detritus of Kaufman’s short 35 years on this Earth. Artist Jonathan Berger collaborated with the Estate of Andy Kaufman, Lynne Margulies, Bob Zmuda, and Tony Clifton on the content and layout of the exhibition. If you know Kaufman’s work, you should be smiling at the inclusion of Tony Clifton in that list. Kaufman created the Clifton character as a washed up lounge singer who defined the word “unprofessional” by showing up drunk, forgetting lines to songs, and insulting the audience with racist “banter.”

Instead of explanatory text on the 17 glass cases containing everything from Kaufman’s original Clifton jacket to the actual hate mail he received from women challenging him to wrestle for the Inter-Gender Wrestling World Championship he created, members of Kaufman’s circle of friends and family will appear during the exhibition and answer questions. A circle of chairs arranged in circa 1970s talk show style will allow visitors literally to step inside Kaufman’s reality as he (re)fashioned it from the American popular culture he loved so passionately and skewered so relentlessly. I’d be interested to know when Tony Clifton plans to show up to answer questions. (To keep things lively, the schedule of guests is a surprise.) Who is behind the prosthetics? Bob Zmuda, who also played the role? Andy’s brother, Michael? Or Andy himself, enjoying one more laugh from faking his own death, as some believe he did? (Kaufman’s death certificate is public record, but, as even as the ending of the biopic Man on the Moon suggests, wouldn’t it be the ultimate Kaufman-esque act to attend your own funeral and, in this case, retrospective exhibition?)

As much as the two-dimensional artifacts (his record collection, his fan letter to Elvis) illuminate Kaufman’s life and career, Andy was Andy most on in 3-D, on film and in live performance. Video footage of Kaufman runs in Maccarone’s new project space, including appearances at New York’s Improv, on Late Night with David Letterman, on Johnny Carson’s The Tonight Show, and other television appearances. Watching Kaufman improvise an intentionally awkward song on piano on Dinah!  talk show host Dinah Shore and fellow guests Bob Hope, Sammy Davis, Jr., and Marvin Hamlisch exchange cringes and curious looks, you get a full measure of how Kaufman invaded the entertainment world from the inside and revealed all the falsity and squareness within it. If Duchamp could have done an Elvis impression, he would have been Andy Kaufman.

But does all this make Andy Kaufman the greatest American performance artist? Performance art remains a European field for the most part, starting with Joseph Beuys and continuing up through today with Marina Abramović. Americans such as Laurie Anderson, Karen Finley, and Chris Burden (as well as several others) all can legitimately claim the crown of greatest American performance artist, but for my money, none of them demonstrated the sheer range and versatility of Kaufman, who managed to tick off more people in his short career than most artists manage to do in a lifetime. On Creating Reality, by Andy Kaufman pointedly ignores Latka, choosing instead to obliquely refer to him through Kaufman’s “Foreign Man” persona that eventually became Latka. But Latka on Taxi represents one of the few times that cutting edge art managed to make its way into mainstream America through that most mainstream of media—the TV sitcom. Americans may not have known it at the time (and may still not know it), but Andy Kaufman, via Latka Gravas, brought modern art and, specifically, modern performance art into their homes and consciousnesses in a memorable, lasting way. That achievement alone, something that cult figures such as Anderson, Finley, and Burden can’t replicate, earns Kaufman top billing.

“I just don’t know Andy,” a teacher wrote on the envelope containing one of his report cards. Even today, most people don’t “know” Andy in the sense that he’s an intelligible artist you can comfortably wrap your head around. But to “know” Andy is to know that he’s deliberately unintelligible, deliberately resistant to your embrace either intellectually or emotionally. On Creating Reality, by Andy Kaufman reminds us through its combination of scattered memorabilia and old school human interaction that the only real connections are face to face, person to person, rather than through falsely intimate talk show interviews or today’s technological equivalent, Facebook. Andy Kaufman’s the greatest American performance artist ever because he dared to nudge us, one cringe at a time, out of our comfort zones and into a reality more human and fulfilling than the one we pretend to enjoy now.