The Opioid Epidemic Is Getting Worse. But What To Do About It?

100 million American suffer from chronic pain. Many need to look beyond opioids to manage it. 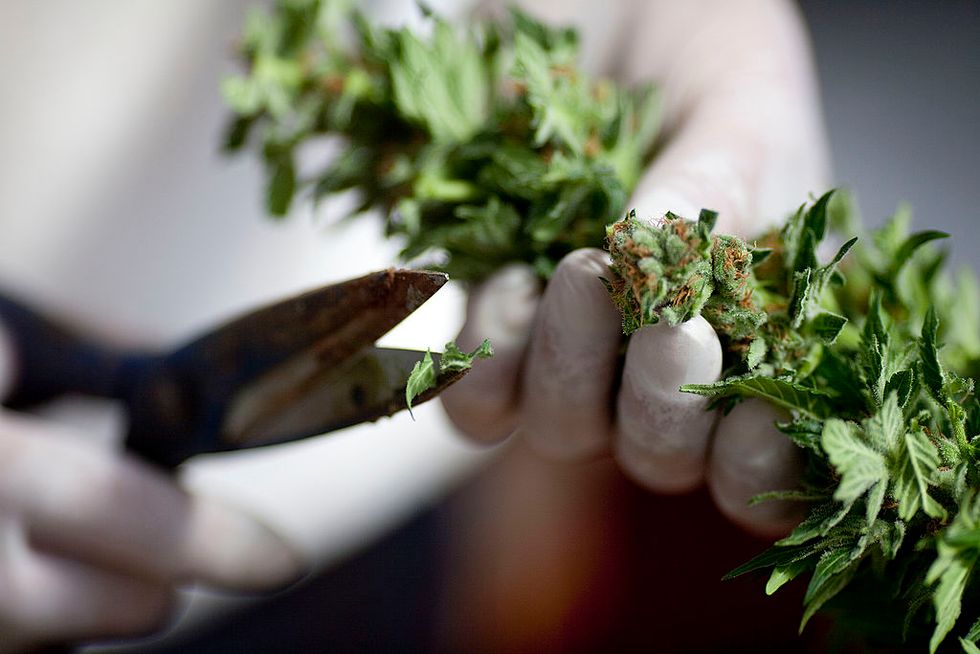 A worker trims cannabis at the growing facility of the Tikun Olam company on March 7, 2011 near the northern city of Safed, Israel. Photo by Uriel Sinai/Getty Images

The amount of ink being spilled regarding the opioid epidemic has increased dramatically in recent months. Increased conversation is healthy and necessary. Yet the next question is not being answered as quickly: What do we do about it?

Given the broad variety of reasons one seeks pain relief a silver bullet seems impossible. Laborers might take pills for back pain, which quickly spirals into addiction. Others add fentanyl or hydrocodone to their polypharmacy, hoping to mitigate the taxation other pharmaceuticals demand of their bodies.

With an estimated 100 million Americans in chronic pain, legislating pills out of circulation only makes consumers turn to the black market to purchase more dangerous drugs on the street and online. Synthetics, heroin, and cocaine are all implicated in the search for a cheaper cure—especially frustrating given cocaine usage had been on a steady decline.

This means that sufferers will have to investigate potential alternatives on a case-by-case basis, a harrowing prospect to say the least. Part of the reason the opioid epidemic commenced is thanks to our cultural pop-a-pill mentality. As we’re finding out this is not a plan for success.

Harvard’s Spaulding Outpatient Center focuses on pain management through a cocktail of therapeutic modalities, including tai chi, yoga, meditation, range-of-motion training, and best practices to increase comfort at home and work. The Center has a two-month waiting list, however, even with expenses predominantly coming out-of-pocket. As the Boston Globe reports,

So far, insurers have not stepped up, despite the potential for savings. Blue Cross Blue Shield of Massachusetts touts a program that reduced opioid prescribing but has made no similar effort to better treat chronic pain.

Given that health care is a hot topic in the new Congress little headway is being made regarding chronic pain. It took insurers years to accept therapies like chiropractic; reimbursements for yoga and meditation seem light years away even though both are effective in treating certain types of pain. One study on the latter

discovered that by activating and reinforcing some areas of the brain used in pain processing, meditation has the overall effect of helping to reduce pain intensity in patients. Other theories on how meditation helps pain exist, including that it decreases stress, which in turn decreases pain.

It’s also doubtful marijuana will be covered anytime soon, but that hasn’t stopped many from medically smoking and ingesting the herb. The benefits of CBD oil are debated, yet recently the DEA reinforced its illegality—especially troubling given recent research correlating opioid decrease with marijuana increase:

Some researchers are focusing on stopping chronic pain before it takes hold. An early severity predictor model looks at current medications, mental health, musculoskeletal health, and other medical conditions to identify potential victims down the road. According to the medical director of that model, Dr. Adam Seidner, being proactive helps eliminate a “chronic-pain cascade.”

Then there’s conversation. In her forthcoming book, What Patients Say, What Doctors Hear, Danielle Ofri considers the necessity of dialogue in the doctor’s office. Her stark and frank discussion is as refreshing as it is surprising. Among her many findings a lack of emphasis on attention creates the conditions for misinformation and distrust, which can lead to wrongful diagnoses and overprescribing.

Ofri’s book is a meditation on attentional capacity—its limits, its strengths, and what dialogue means for health care in the modern era. Technology, a big medical focus in our app-driven era, is no panacea; healing is at least partly accomplished in the doctor-patient interaction. That requires both doctor and patient listen attentively, a frustratingly diminishing skill during a time when people would rather stare at their phones and charts than into another set of eyes.

The incoming administration is calling for a repeal of the Affordable Care Act with no agenda to replace it. If such a climate remains opioid addiction and overdoses will continue to rise. The focus of this season has been on American employment. Sadly American pain is never discussed, which is odd given that statistics show this affects many more people than jobs.

Richard Ashcroft’s best song is arguably ‘The Drugs Don’t Work.’ The lyrics were inspired by his battle with drug addiction. While he knew drugs weren’t valuable—he recognized they made him worse—he was looking for an escape.

Today’s war on drugs has a different face than what Nixon launched and Reagan immortalized, but the essence remains the same. Americans seek an escape from pain. Until our government offers a better management plan and insurers look beyond the plastic bottle, pain relief remains up to each individual. Finding something that works is a daunting task, but it beats being beholden to something that definitely does not.