The End of the Guru 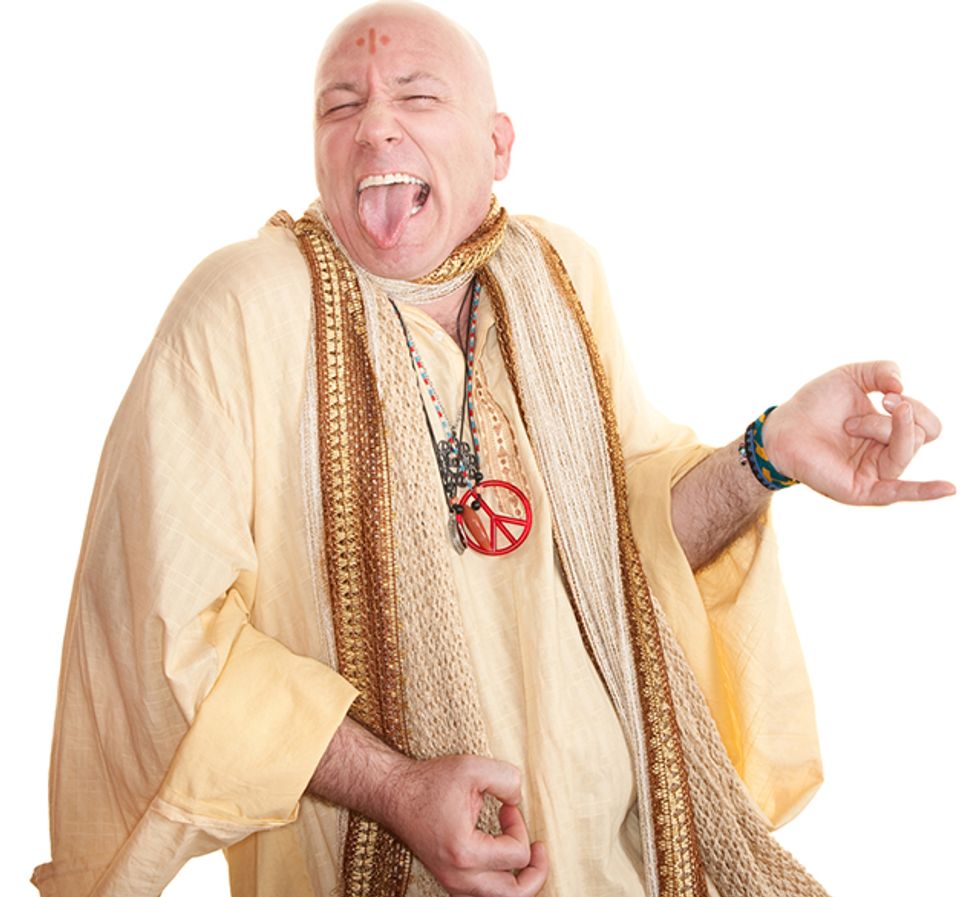 In the last month, two people that I’ve critiqued in this column have replied and created fruitful dialogues. J. Brown, a teacher whom I respect for his intellectual fortitude, just sent me this new blog post; I am currently in a very pleasant email exchange with Indradyumna Swami, who responded to my article on the afterlife that involved him. I mention these recent exchanges (and the many that I’ve partaken in in the comments section) because such dialogues are important.

Bill Moyers once said that a journalist has the job of educating himself in public. This is true, as is the opportunity for him to be wrong in public as well, of which I have certainly taken part in. Honest, stimulating debate is healthy, as is correcting misinformation.

One thing in Indradyumna’s email striking a particular note, as it is something I have long mused over, is the idea of a guru, or realized soul. Within various spiritual circles, a guru is a revered being, sometimes being seen (and treated) as something ‘other’ than human—a role they at times enjoy, until a scandal breaks out, at which point they slink back into their ‘human’ character.  From the outside, gurus can be seen in a variety of ways, many of them unflattering.

The word ‘guru’ is used today in all sorts of inappropriate circumstances. I’ve seen people promote themselves as ‘marketing gurus,’ ‘social media gurus’ and the like. There’s little irony that those involved in advertising quickly affix the term to their titles, as gurus are known to do the same: their services are for sale, be it in this world or another they tell you to believe in.

This is not to disrespect the role of a teacher—I have one, though he would never call himself a guru (or even a teacher). Therein lies the rub: you are calling yourself, or allowing yourself to be called, an honorary title that is at its essence about moving beyond titles. Guru sometimes translates as ‘light bringer.’ There are human beings that do this for others. The problem occurs when they pretend that effervescence is a spotlight designed to shine on them alone. In this sort of guru's world, there is no room for dialogue.

We see this repetition played out constantly in the yoga world. In the past two years alone three popular teachers have been accused of sex scandals: Bikram Choudhury, John Friend and Kausthub Desikachar have all misunderstood power as meaning they can have whatever they want—indeed, their supposed ‘inner light’ demands the submission of others.

This sort of unenlightened activity should not take away from the great teachers in the world. And yet the greatest quickly shed the need for titles. Why the need of gurus at all? It is a relic of a prior time. If the intention is to help the student see their inner light, the guru dissolves when the light appears. Any good teacher can be an intermediary for such an action, so bolstering up a particular few, usually charismatic creatures as tapping into divine essences defeats the purpose of self-realization.

I’ll give a personal example. In the last few years I have worked in medicine ceremonies with two different shamans. I use that word loosely for the first who, after administering peyote to the group, spent the evening essentially telling us what experiences we should be having. He was acting as the organizer not an intermediary. Needless to say the buttons I ingested were ineffectual. I spent the entire evening miserable and wanted nothing more than to leave the space. It was not until I left and had breathing room on my own that the psychotropic began to work its magic.

The more recent medicine man I’ve worked with in ayahuasca ceremonies was completely different. During the rituals I was left alone to experience what the medicine had to offer. He was there in a more supportive role, not one staring down at us, but in the thick of it with us. The shaman offered advice when needed, moved along moments with song, and maintained an air of humility and humor as we processed our evenings. Because of this, everyone involved had incredibly lucid experiences, coping with whatever we learned that evening. By stepping out of his own way he made space for others.

There’s nothing wrong with a guru who helps one witness their inner light. Throughout history many men and women have played such roles. This argument is not only semantic, however—the term is eventually shed regardless. It’s those so-called teachers who wear the term as something they’ve earned that’s dangerous. A functionary without humility will eventually crack under the weight of his or her own hubris.

In another part of the email, Indradyumna mentioned that I spent a lot of time critiquing but not offering a guideline for existence. Fair enough. I come from a lineage of thought that uses criticism as a tool for unlearning certain neural patterns. But he’s right, we do need a foundation to work from. As a yoga teacher, it is the yamas and niyamas—the ethical bedrock upon which yoga is built.

Yet the greatest spiritual foundation I’ve ever come across comes from Judaism. One day a Gentile walked up to Hillel the Elder and said that he would follow him if Hillel could explain the Torah while standing on one foot. His response cut through the unnecessary metaphysics that so many get caught up in their quest of an ‘explanation’ of existence. His words makes us fully human.

That which is hateful to you, do not do to your fellow. That is the whole Torah. The rest is the explanation; go and learn.