Richard Branson doubles down on this 1931 prediction

It turns out Winston Churchill wrote an essay of predictions titled 'Fifty Years Hence'—and while he was off on the timing, some are finally coming true. 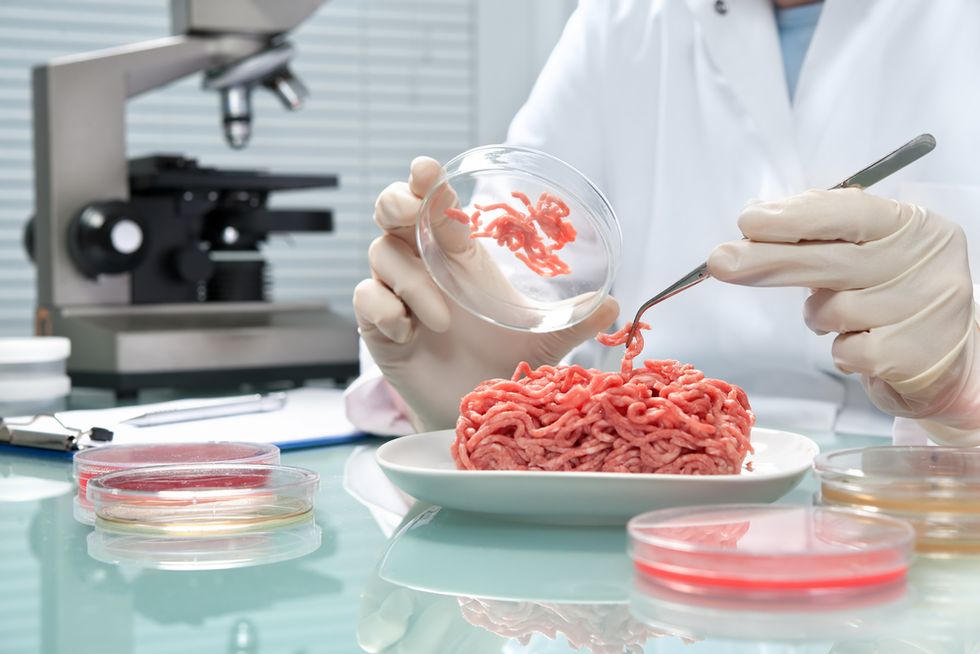 Humans have been tinkering in laboratories for millennia. Before then nature was—in many ways, remains—a laboratory itself. Agriculture was a hard-fought discovery that’s still being understood through trial and error. Given agriculture’s role in climate change, our understanding of lab work is shifting again.

We remain between two worlds, that of nature and that of meddling with nature. Sometimes a harmonious relationship exists; often it is fraught with danger. A “back to the earth” movement persists in social consciousness. The same thinkers who believe we’ve destroyed ecosystems and animal populations often welcome scientific intervention—lab-grown meat and leather are two ideas animal rights activists and environmentalists alike applaud. Foreseeing the future is not particularly challenging in our digital age. If it can be dreamed it can be produced (or reproduced). But understanding which predictions will have large-scale consequences is another story. Richard Branson has long relied on foresight, and he sees lab-grown meat not only impacting agriculture and economics, but actually replacing animal consumption:

"I believe that in 30 years or so we will no longer need to kill any animals and that all meat will either be clean or plant-based, taste the same and also be much healthier for everyone."

Branson is no speculative ideologue; he has a financial stake in lab-grown meat, with recent investments in Memphis Meats. Yet just as his vision of space travel could net him profits, technology and emerging markets are old bedfellows. In this case, a boon for companies that reduce suffering and carbon emissions is a win for everyone.

Today what could have taken decades seems to occur in months. Life seems to be speeding up. Nearly a hundred years ago—December, 1931, to be exact—Winston Churchill knew time is fluid, or, as he puts it in an article titled 'Fifty Years Hence', published in Strand Magazine, “constantly quickening.” Churchill witnessed civilized nations rising above the need for the bare necessities of survival to experience what he calls “culture.” Cultures have to keep progressing, he insisted, as sliding backwards would be devastating:

"Mankind has gone too far to go back, and is moving too fast to stop. There are too many people maintained, not merely in comfort but in existence, by processes unknown a century ago, for us to afford even a temporary check, still less a general setback, without experiencing calamity in its most frightful form."

Churchill’s anthropological reckoning on the economics of past societies has been updated by recent research. Yet he was an ardent devotee of history. He expresses particular adoration for Tennyson’s “Locksley Hall,” of which he said the poet's predictive couplets have come to pass—a slightly premature assessment, given the coming world war. Churchill uses Tennyson as a springboard for his own predictive powers, which he says combines historical education and scientific instinct. Churchill proved (or is proving) prescient in his social sorcery. In an ode certainly pleasing to animal rights activists, he knew food production was about to take a serious turn:

"We shall escape the absurdity of growing a whole chicken in order to eat the breast or wing, by growing these parts separately under a suitable medium. Synthetic food will, of course, also be used in the future… The new foods will from the outset be practically indistinguishable from the natural products, and any changes will be so gradual as to escape observation."

Frozen, processed foodstuffs would be next, however, changing the face of the planet as World War II raged on. Rather than creating foods, manufactures utilized chemistry to delay the spoiling of existing foods while injecting animals with antibiotics and growth hormones to increase their yield. If Churchill foresaw this he gave no hint, for his vision is more Paradiso than Inferno. If lab-grown meat is on the horizon, as it appears to be, it took the clearing of a large roadblock to arrive. Production in many forms is Churchill’s great hope of the future. Not only food, but work will change dramatically. Nuclear energy replaces coal. Engines and machinery make slavery unnecessary. Robots will offer us more leisure time and less physical strain. So great is our mechanical engineering, in fact, he saw all of nature bowing to us:

"Geography and climate would obey our orders."

True, they have, the problem being we weren’t aware what orders we’ve been giving. Churchill might have missed greenhouse gases because his focus was on the structural side. He believed sunlight would be inconsequential when food is grown with “artificial radiation.” Agricultural bunkers would shorten the distance between city and country, as urbanites gain acres:

"Parks and gardens will cover our pastures and ploughed fields. When the time comes there will be plenty of room for the cities to spread themselves again."

Churchill was even clued into the development of artificial life. A London play clued him into the possibility of test tube babies. Humanoid creatures will be developed for the purpose of employment "without other ambitions.” He believed Christian civilization would prevent such an ethically indeterminate development, but we’d better stay upon on the technology as Russians might welcome robotic human beings. He writes, with more than a hint of disdain,

"There is nothing in the philosophy of Communists to prevent their creation."

Churchill’s apocalyptic message remains timely. Sure, there were oversights: Our brains are quite different than those of our ancestors “millions of years ago,” and the idea that “modern man we know so well will do the most terrible deeds, and his modern woman will back him up” would not even go over even a decade later when the women’s rights movement picked up steam during the Second World War.

Yet Churchill knew science changes the world, just as he knew that we’re doomed without an understanding of history. These messages remain particularly meaningful in a world being ravaged by climate change, piece by piece by piece, as well as tribal infighting fueled by nationalistic anxiety across the globe.

Materialistic progress is irrelevant if humans can’t get along. Not so much a prediction as Churchill simply opening his eyes. He knew technology and science offer both “Blessing and Cursing,” that we are ultimately the deciders of our fate. Optimist he was, he concluded with a sense of hope, which is sometimes all we have to keep us pressing forward.

"No material progress, even though it takes shapes we cannot now conceive, or however it may expand the faculties of man, can bring comfort to his soul. It is this fact, more wonderful than any that Science can reveal, which gives the best hope that all will be well."