Reconsidering the Business of Death 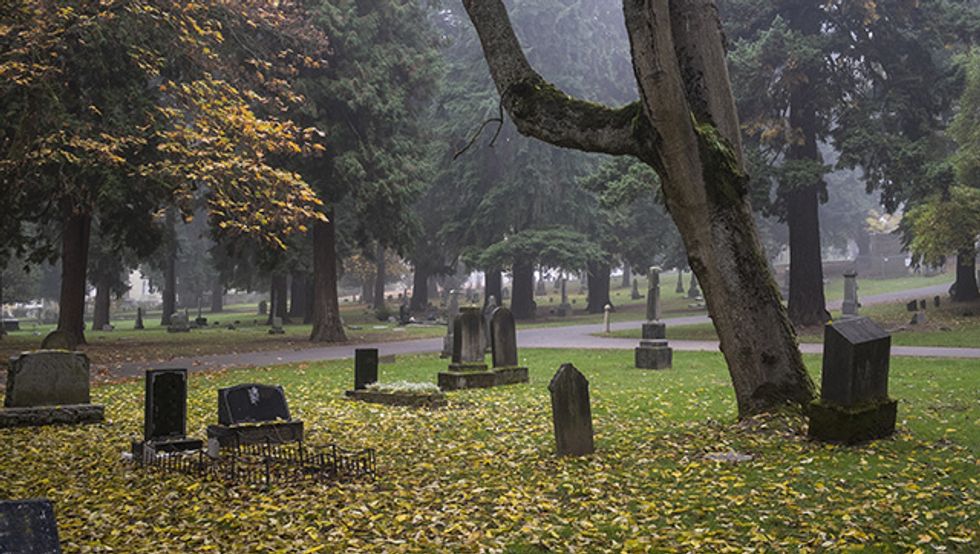 Death is big business. The projected revenue of the funeral industry is projected to be $16.2 billion in 2014. While it’s tough to consider the economics of death when a loved one is involved, an entire movement of low-cost and eco-friendly burials is emerging, which is having consequences not only on our wallets but our philosophy of death as well.

In one of his famous skits, comedian George Carlin called for an uprooting of cemeteries and golf courses as a way of creating housing for the homeless population. Recent innovations are not exactly aiming for that goal; habitat preservation and reduced carbon emissions, however, are major concerns in the green cemetery movement.

Amy Cunningham, funeral director at Greenwood Heights Funeral and Cremation Services in Brooklyn, stated that every year conventional funeral businesses use 104,000 tons of steel building caskets, ‘enough to rebuild the Golden Gate Bridge.’ This process, which represents last century’s leading paradigm in the funeral industry, utilizes materials that do not decompose, are expensive to produce and transport, and potentially contaminate the land.

Cremations have long been the more expedient and affordable alternative. Many people feel that land used for cemeteries can be put to better use and the rising costs associated with burials is prohibitive. The median price for a funeral in 2011 was $7,045, up from $708 in 1960. In that same time, the number of Americans choosing cremation has grown from 3.56% to 42%.

Creative thinkers are putting the ritual attached to cremation into practice by protecting undeveloped lands. As Cunningham writes on her blog,

Cemetery laws prohibit highways or shopping malls from coming to land that has deceased people in it, so in using a green cemetery, you are helping to keep gorgeously-wooded, rural properties safe from development.

Not that cemeteries cannot be beautiful. When I moved to Jersey City in 1999, my bedroom overlooked Holy Name Cemetery & Mausoleum (single grave: $1,900-$3,700). Sandwiched between Route One and Journal Square, that apartment afforded me a gorgeous, breezy view in an otherwise run-down working class neighborhood bookended by warehouses. The cemetery itself, built in 1866, featured a number of stunning mausoleums; I spent many afternoons walking along the winding roads, photographing the angelic decorations plastered onto gravestones.

Death and spirituality are old bedfellows. The topic has long concerned philosophers, from Socrates to Shiva to Seneca to Saramago. The notion of death as a ‘passing’ into another inexplicable domain has been the subject of scriptures and poetry for millennia. In the Bhagavad Gita death is the divinity taking off and putting on human bodies as we do our clothing. In Western faiths it is a (hopefully) perfect place where all of our dreams finally come to fruition.

Thus, the burial ritual is an important component of communities: a remembrance, sharing and celebration, even in mourning. Yet as our awareness of the consequences of our actions grow, considering how this ritual potentially nourishes the planet is important. Esmeralda Kent, founder of Kinkaraco Green Burying Products, calls the new movement ‘21st Century Death Care.’ She says,

Our evolving understanding of death strengthens our relationship with nature: not as disembodied souls, but as animals whose minerals help regenerate the earth. Eternal Reefs, for example, preserves coral reefs by dropping cremated bodies in specially designed reef balls that allow ocean life to grow on them.

For a long time we believed something immaterial existed inside of us that deserved elaborate funeral rites. We’ve moved on. Mounting evidence of our destructive inclinations is being felt daily. It’s heartening that more people are recognizing the true worth of our flesh and bones: as fertilizer for the earth that birthed us in the first place.