“Do you think we are alone?” That question is, without fail, one of the first things people ask me when they learn I’m an astronomer. And I get why. It’s also the question I most want an answer for. But that answer may depend a lot on what kind of life the universe favors (if it favors any at all). So, the question I want to briefly touch on today is how common will it be for any life that appears on any planet in the universe to start climbing up the evolutionary ladder of complexity?

On Earth, the history of life is mainly a story of single cells. Earth’s origin lies some 4.5 billion years ago, and the best fossil records put the emergence of life as single-celled creatures about a billion years later. After life’s first appearance, almost two billion years go by during which all evolutionary activity was on those single-celled organisms. There was some really amazing biochemical machinery evolving within those little cells but if you are interested in multicellular creatures, they don’t appear until sometime around 700 million years ago.

… if there is one thing we know is true, it’s that nature is more clever than we are. That means it may know lots of ways to produce animals without oxygen around or even in the presence of buckets of CO2.

What are we to make of this incredibly long run of Earth as Planet Bacteria? (Note, there were actually other kinds of single-celled creatures too). Well, it certainly tells us that evolutionary success does not demand multicellularity. During these long eons, life invented the most amazing array of nano-machines for a jaw-dropping variety of purposes. For example, single-celled critters invented photosynthesis for turning sunlight into sugars, metabolisms for turning sugars into energy, and complex intracellular transport mechanisms to move stuff where it was needed and get rid of waste. Earth before plants and animals was already a fertile place full of life that had, in its way, become spectacularly complex at least on the level of biochemistry.

Given the long run of this version of Earth, it may be that there is no reason that more complex life should be expected to form in all or even most cases on other planets. 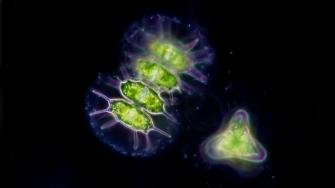 Protozoa—a term for a group of single-celled eukaryotes—and green algae in wastewater, viewed under the microscope.Credit: sinhyu via Adobe Stock

Another way the story of life on Earth might not get repeated elsewhere in the cosmos relates to the composition of planetary atmospheres. Our world did not begin with its oxygen-rich air. Instead, oxygen didn’t show up until almost two billion years after the planet formed and one billion years after life appeared. Earth’s original atmosphere was, most likely, a mix of nitrogen and CO2. Remarkably it was life that pumped the oxygen into the air as a byproduct of a novel form of photosynthesis invented by a novel kind of single-celled organism, the nucleus-bearing eukaryotes. The appearance of oxygen in Earth’s air was not just a curiosity for evolution. Life soon figured out how to use the newly abundant element and, it turns out, oxygen-based biochemistry was supercharged compared to what came before. With more energy available, evolution could build ever larger and more complex critters.

Oxygen may also be unique in allowing the kinds of metabolisms in multicellular life (especially ours) needed for making fast and fast-thinking animals. Astrobiologist David Catling has argued that only oxygen has the right kind of chemistry that would allow for animals to form on any world.

Atmospheres may play another role in what can and can’t happen in the evolution of life. In 1959, Su-Shu Huang proposed that each star would be surrounded by a “habitable zone” of orbits where a planet would have temperatures neither too hot nor too cold to keep life from forming (i.e. liquid water could exist on the planet’s surface). Since then, the habitable zone has become a staple of astrobiological studies. Astronomers now know that the outer part of the habitable zone will be dominated by worlds with lots of greenhouse gases like CO2. A planet in a location like Mars, for example, would require a thick CO2 blanket to keep its surface above freezing. But all that CO2 could present its own problems for life. Almost all forms of animal life on Earth, including sea creatures, die when placed in CO2-rich environments. This has led astronomer Eddie Schwieterman and colleagues to propose a habitable zone for complex life: A band of orbits where planets can stay warm without requiring heavy CO2 atmospheres. According to Schwieterman, animal life of the kind we know would only be able to form in this much thinner band of orbits.

So, we have three lines of evidence that may suggest multicellular life (including thinking animals) may not be the road most taken across the universe. If this were true, then the galaxy might be awash with life but be sparse in terms of tentacles, paws, or boots on the ground.

Now, before your shoulders sag in sadness, it’s important to note some facts. First, there are likely 400 billion planets in our galaxy alone. This provides a lot of leeway for experimentation. Second, if there is one thing we know is true, it’s that nature is more clever than we are. That means it may know lots of ways to produce animals without oxygen around or even in the presence of buckets of CO2.

More than 90% of human faces are home to mites that live in our skin pores. These friendly guests might be merging with us.
The Future

Scientists have discovered enzymes from several plastic-eating bacteria. So, why are our oceans still full of plastic pollution?
Health

This isn’t America’s first rodeo with monkeypox. In 2003, the virus swept across America thanks to a shipment of exotic animals.
Up Next
Starts With A Bang

Why Do Physicists Say A Multiverse Has To Exist?

The theory of cosmic inflation predicts a multiverse: an enormous number of Universes that experience hot Big Bangs, but each of those regions where a Big Bang occurs are completely […]