Worse still, if you are thinking about interstellar travel, nature provides a hard limit on acceleration and speed. As Einstein showed, it’s impossible to accelerate any massive object beyond the speed of light. Since the galaxy is more than 100,000 light-years across, if you are traveling at less than light speed, then most interstellar distances would take more than a human lifetime to cross. If the known laws of physics hold, then it seems a galaxy-spanning human civilization is impossible.

Ah, the warp drive, that darling of science fiction plot devices. So, what about a warp drive? Is that even a really a thing?

Let’s start with the “warping” part of a warp drive. Without doubt, Albert Einstein’s theory of general relativity (“GR”) represents space and time as a 4-dimensional “fabric” that can be stretched and bent and folded. Gravity waves, representing ripples in the fabric of spacetime, have now been directly observed. So, yes spacetime can be warped. The warping part of a warp drive usually means distorting the shape of spacetime so that two distant locations can be brought close together — and you somehow “jump” between them.

This was a basic idea in science fiction long before Star Trek popularized the name “warp drive.” But until 1994, it had remained science fiction, meaning there was no science behind it. That year, Miguel Alcubierre wrote down a solution to the basic equations of GR that represented a region that compressed spacetime ahead of it and expanded spacetime behind to create a kind of traveling warp bubble. This was really good news for warp drive fans.

The problems with a warp drive

There were some problems though. Most important was that this “Alcubierre drive” required lots of “exotic matter” or “negative energy” to work. Unfortunately, there’s no such thing. These are things theorists dreamed up to stick into the GR equations in order to do cool things like make stable open wormholes or functioning warp drives.

It’s also noteworthy that researchers have raised other concerns about an Alcubierre drive — like how it would violate quantum mechanics or how when you arrived at your destination it would destroy everything in front of the ship in an apocalyptic flash of radiation. 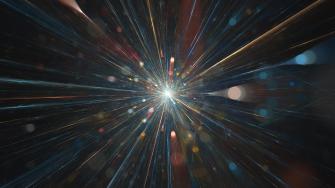 Recently, however, there seemed to be good news on the warp drive front with the publication this April of a new paper by Alexey Bobrick and Gianni Martre entitled “Introducing Physical Warp Drives.” The good thing about the Bobrick and Martre paper was it was extremely clear about the meaning of a warp drive.

Warp drives are simpler and much less mysterious objects than the broader literature has suggested.

What Bobrick and Martre did was step back and look at the problem more generally. They showed how all warp drives were composed of three regions: an interior spacetime called the passenger space; a shell of material, with either positive or negative energy, called the warping region; and an outside that, far enough away, looks like normal unwarped spacetime. In this way they could see exactly what was and was not possible for any kind of warp drive. (Watch this lovely explainer by Sabine Hossenfelder for more details). They even showed that you could use good old normal matter to create a warp drive that, while it moved slower than light speed, produced a passenger area where time flowed at a different rate than in the outside spacetime. So even though it was a sub-light speed device, it was still an actual warp drive that could use normal matter.

That was the good news.

The bad news was this clear vision also showed them a real problem with the “drive” part of the Alcubierre drive. First of all, it still needed negative energy to work, so that bummer remains. But worse, Bobrick and Martre reaffirmed a basic understanding of relativity and saw that there was no way to accelerate an Alcubierre drive past light speed. Sure, you could just assume that you started with something moving faster than light, and the Alcubierre drive with its negative energy shell would make sense. But crossing the speed of light barrier was still prohibited.

So, in the end, the Star Trek version of the warp drive is still not a thing. I know this may bum you out if you were hoping to build that version of the Enterprise sometime soon (as I was). But don’t be too despondent. The Bobrick and Martre paper really did make headway. As the authors put it in the end:

That really is progress.

Tags
lightspacewarp drive
In this article
lightspacewarp drive
Related
Life
“I went to space and discovered an enormous lie”
What astronaut Ron Garan saw in space changed his life forever – here’s what it taught him.
▸
8 min
—
with
Ron Garan
Videos
The true story behind Carl Sagan’s cult classic, Contact
Do aliens dream about meeting us, too?
▸
with
Jill Tarter
Videos
NASA astronaut explains humanity’s trajectory to Mars
The first human that isn’t an Earthling could be in our lifetime.
▸
5 min
—
with
Robert Curbeam
How Earth’s 23.4° tilt makes life beautiful
Rituals come as much from religion as they do from the way Earth spins around the Sun.
▸
4 min
—
with
Sasha Sagan
Videos
Michio Kaku: “We need a second planet”
Humans won’t survive if we stay on Earth. Michio Kaku explains.
▸
7 min
—
with
Michio Kaku
Up Next
The Past
Just when the Middle Ages couldn’t get worse, everyone had bunions
The Black Death wasn’t the only plague in the 1300s.