Sometimes, when you are looking for something ordinary, you find the unexpected. This is definitely the case with the strange ‘Oumuamua, which made international headlines as a potential interstellar visitor. Its true identity remained obscure for a while, as scientists proposed different explanations for its puzzling behavior. This is the usual scientific approach of testing hypotheses to make sense of a new discovery.

What captured the popular imagination was the claim that the object was no piece of rock or comet, but an alien artifact, designed by a superior intelligence.

Do you remember the black monolith tumbling through space in the classic Stanley Kubrick movie 2001: A Space Odyssey? The one that “inspired” our ape-like ancestors to develop technology and followed humanity and its development since then? What made this claim amazing is that it wasn’t coming from the usual UFO enthusiasts but from a respected astrophysicist from Harvard University, Avi Loeb, and his collaborator Shmuel Bialy. Does their claim really hold water? Were we really visited by an alien artifact? How would we know?

Before we dive into the controversy, let’s examine some history. ‘Oumuamua was discovered accidentally by Canadian astronomer Robert Weryk while he was routinely reviewing images captured by the telescope Pan-STARRS1 (Panoramic Survey and Rapid Response System 1), situated atop the ten-thousand-foot Haleakala volcanic peak on the Hawaiian island of Maui. The telescope scans the skies in search of near-Earth objects, mostly asteroids and possibly comets that come close to Earth. The idea is to monitor the solar system to learn more about such objects and their orbits and, of course, to sound the alarm in case of a potential collision course with Earth. Contrary to the objects Weryk was used to seeing, mostly moving at about 40,000 miles per hour, this one was moving almost five times as fast — nearly 200,000 miles per hour, definitely an anomaly. 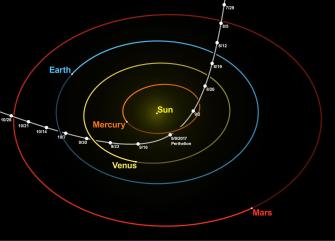 Hyperbolic trajectory of ʻOumuamua through the inner Solar System.Credit: nagualdesign / Tomruen / JPL Horizons via Wikipedia and licensed under CC BY-SA 4.0

Intrigued, astronomers tracked the visitor while it was visible, concluding that it indeed must have come from outside our solar system, the first recognized interstellar visitor. Contrary to most known asteroids that move in elliptical orbits around the sun, ‘Oumuamua had a bizarre path, mostly straight. Also, its brightness varied by a factor of ten as it tumbled across space, a very unusual property that could be caused either by an elongated cigar shape or by it being flat, like a CD, one side with a different reflectivity than the other. The object, 1I/2017 U1, became popularly known as ‘Oumuamua, from the Hawaiian for “scout.”

In their paper, Loeb and Bialy argue that the only way the object could be accelerated to the speeds observed was if it were extremely thin and very large, like a sail. They estimated that its thickness had to be between 0.3 to 0.9 millimeters, which is extremely thin. After confirming that such an object is robust enough to withstand the hardships of interstellar travel (e.g., collision with gas particles and dust grains, tensile stresses, rotation, and tidal forces), Loeb and Bialy conclude that it couldn’t possibly be a solar system object like an asteroid or comet. Being thus of interstellar origin, the question is whether it is a natural or artificial object. This is where the paper ventures into interesting but far-fetched speculation.

First, the authors consider that it might be garbage “floating in interstellar space as debris from advanced technological equipment,” ejected from its own stellar system due to its non-functionality; essentially, alien space junk. Then, they suggest that a “more exotic scenario is that ‘Oumuamua may be a fully operational probe sent intentionally to Earth vicinity by an alien civilization,” [italicized as in the original] concluding that a “survey for lightsails as technosignatures in the solar system is warranted, irrespective of whether ‘Oumuamua is one of them.”

You can shoot down as many hypotheses as you want to vindicate yours, but this doesn’t prove yours is the right one.

I have known Avi Loeb for decades and consider him a serious and extremely talented astrophysicist. His 2018 paper includes a suggestive interpretation of strange data that obviously sparks the popular imagination. Theoretical physicists routinely suggest the existence of traversable wormholes, multiverses, and parallel quantum universes. Not surprisingly, Loeb was highly in demand by the press to fill in the details of his idea. A book followed, Extraterrestrial: The First Sign of Intelligent Life Beyond Earth, and its description tells all: “There was only one conceivable explanation: the object was a piece of advanced technology created by a distant alien civilization.” 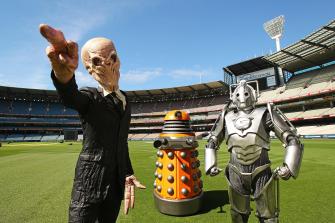 It came from outer space.Credit: Scott Barbour via Getty Images

This is where most of the scientific establishment began to cringe. One thing is to discuss the properties of a strange natural phenomenon and rule out more prosaic hypotheses while suggesting a daring one. Another is to declare to the public that the only conceivable explanation is one that is also speculative. An outsider will conclude that a reliable scientist has confirmed not only the existence of extraterrestrial life but of intelligent and technologically sophisticated extraterrestrial life with an interest in our solar system. I wonder if Loeb considered the impact of his words and how they reflect on the scientific community as a whole.

This is why aliens won’t talk to us

Earlier this year, in a live public lecture hosted by the Catholic University of Chile, Avi Loeb locked horns with Jill Tarter, the scientist that is perhaps most identifiable as someone who spent her career looking for signs of extraterrestrial intelligence. (Coincidentally, I was the speaker that followed Loeb the next week in the same seminar series and was cautioned — along with the other panelists — to behave myself to avoid another showdown. I smiled, knowing that my topic was pretty tame in comparison. I mean, how can the limits of human knowledge compare with alien surveillance?)

The Loeb-Tarter exchange was awful and, it being a public debate, was picked up by the press. Academics can be rough like anyone else. But the issue goes deeper.

What scientists say matters. When should a scientist make public declarations about a cutting-edge topic with absolute certainty? I’d say never. There is no clear-cut certainty in cutting-edge science. There are hypotheses that should be tested more until there is community consensus. Even then, consensus is not guaranteed proof. The history of science is full of examples where leading scientists were convinced of something, only to be proven wrong later.

The epistemological mistake Loeb committed was to make an assertion that publicly amounted to certainty by using a process of elimination of other competing hypotheses. You can shoot down as many hypotheses as you want to vindicate yours, but this doesn’t prove yours is the right one. It only means that the other hypotheses are wrong. I do, however, agree with Loeb when he says that ‘Oumuamua should be the trigger for an increase in funding for the search for technosignatures, a way of detecting intelligent extraterrestrial life.

Tags
aliensastrophysics
In this article
aliensastrophysics
Related
13.8
Why stars never collide and galaxies always do
We only need two numbers to understand why.
Hard Science
Astronomers discover closest known black hole to Earth, Gaia BH1
At 1,600 light years away, the black hole is practically in our cosmic backyard.
13.8
A new window to the early universe (and aliens?)
The upcoming launch of the James Webb Space Telescope is the event of a lifetime.
Starts With A Bang
How to understand Einstein’s equation for general relativity
Mathematically, it is a monster, but we can understand it in plain English.
Starts With A Bang
Could fundamental physical constants not be constant across space and time?
Signals from across the universe point toward a fascinating possibility.
Up Next
Hard Science
Asteroid impact: NASA simulation shows we are sitting ducks
Even with six months’ notice, we can’t stop an incoming asteroid.