Pandemic fatigue is beginning to grind. Amidst yet another pandemic wave cresting in America and in Europe, we have to ask ourselves what’s going on, now that vaccines are becoming available. Americans are justly proud of living in a country where personal choices—political, religious, sexual—are supposedly free. I write “supposedly” because clearly there is widespread prejudice and judgement of others and their choices. Acceptance of differences and open-mindedness is still on the to-do list for many. Still, at least we don’t have army tanks rolling down the streets when people demonstrate their political or social views. Not usually anyway. For comparison, look at what’s happening in Myanmar.

What puzzles me is what could be called the ditching of privilege. I look, for example, at the situation in Brazil, where I was born and grew up. A huge shortage of vaccines and a government that has consistently downplayed the science has resulted in massive fatalities. People are clamoring for help while hospitals are nearing capacity. In the U.S., vaccines are becoming widely available for younger sectors of the population. In two to three months, we could reach herd immunity and life could be close to normal again. Yet, many are choosing not to take the vaccine or to wear masks. “It is my choice and no government should mess with it!” This kind of choice illustrates a confusing conflict between personal freedom and civic duty. When should you sacrifice your personal choices and views for the benefit of your family, community, and ultimately, country?

The choice to get a vaccine and to wear a mask is an expression of your freedom to be a moral citizen and to protect your family, community, and country.

I’m going to take a detour here and go back to another time when a group of individuals had to face a very difficult choice between personal views and civic duty. In 1941, the Japanese bombing of Pearl Harbor prompted the US to join the Allies in the war against Germany and Japan. Two years earlier, on 2-August-1939, Albert Einstein wrote a letter to President Franklin Roosevelt sounding the alarm of a very possible Nazi nuclear bomb. “In view of this situation you may think it desirable to have some permanent contact maintained between the Administration and the group of physicists working on chain reactions in America,” Einstein wrote.

Now, Einstein was an outspoken pacifist, as were many of the physicists then working to understand nuclear chain reactions. When the Manhattan Project to build a U.S. atomic bomb started for real in 1942, the main worry and motivation for the group of scientists working in secrecy at Los Alamos was the fear of Hitler with a nuclear bomb in his hands. A split happened within the group. Some scientists pushed the moral worries of building a weapon of mass destruction aside and undertook the formidable technical challenge as another tough scientific problem to figure out. Others, however, had serious moral qualms in participating in the project, knowing very well what the social and political consequences would be. Still, they pushed their personal views aside and worked to build the bomb. The fear of a Nazi threat and the sense of civic duty, the need to protect their country, their community, their families, and their values took center stage, superseding their personal choice. 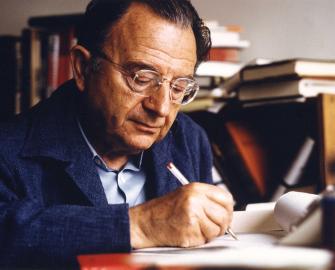 Choosing to place community and love for the nation over personal gain or values is what German social psychologist and humanistic philosopher Erich Fromm called “freedom to,” as opposed to “freedom from.” Fromm argued that the course of civilization and industrialization led citizens to an ever-growing process of individuation—the realization of your aloneness as an individual in a large society— where the weight of choosing for oneself became a heavy emotional burden. People that once saw themselves protected by their communities and religious faith were now set adrift by the very progress of democracy and capitalism. Freedom came with a heavy emotional cost. The consequence was the rise of fascist authoritarian governments that effectively chose for the individuals, giving them a sense of relief from the burden of choice.

Most people focus their battles in the “freedom from” category, confused between their individual freedom and their duties to community and country. The scientists that chose to continue working on the bomb against their personal values did so because they were not focusing on their individual choices above all others. They understood that the damage from the outside threat—a Nazi bomb—would have a devastating effect for their lives, families, communities, and country. So, they chose to work on the bomb to protect their freedom.

Let’s apply this lesson to vaccines and mask-wearing. At face value, these seem to be personal choices. And if you see them as personal choices then you conclude that any action against your personal choice is a threat to your freedom from government control. But that’s a fundamental mistake. The choice to get a vaccine and to wear a mask is an expression of your freedom to be a moral citizen and to protect your family, community, and country. The virus is the outside threat that has already compromised everyone’s way of life, caused immense loss and pain, and wreaked havoc with the economy across the globe. By doing something for your family, community, and country you exercise your freedom to protect what’s dear to you. This is what an act of love is.

After 10,000 years of civilization, have we figured out what virtue is?
Thinking

Our inaugural special issue is focused on progress — the search for, the study of, and the project towards a better world.
Up Next
Neuropsych

New research reveals that the face can affect the shape of the brain through a complex “cross-talk” between the two structures.