Last week in Part 1, we celebrated the great physicist Steven Weinberg, bringing back his masterful book The First Three Minutes: A Modern View of the Origin of the Universe, where he tells the story of how, in the first moments after the Big Bang, matter started to organize into the first atomic nuclei and atoms. This week we continue to follow Weinberg’s lead, plunging further back in time, as close to the beginning as we reliably can.

But first, a quick refresher. The first light atomic nuclei — aggregates of protons and neutrons — emerged during the very short time window between one-hundredth of a second and 3 minutes after the bang. This explains Weinberg’s book title. Recall that atoms are identified by the number of protons in their nuclei (the atomic number) — from hydrogen (with a single proton) to carbon (with six) and all the way to uranium (with 92). The early cosmic furnace forged only chemical elements 1, 2, and 3 — hydrogen, helium, and lithium (as well as their isotopes, which contain the same number of protons but different numbers of neutrons). All heavier elements are forged in dying stars.

The hypothesis that the universe was the alchemist responsible for the lightest elements has been beautifully confirmed by numerous observations during the past decades, including improving a lingering discrepancy with lithium-7. (The “7” represents three protons and four neutrons for this lithium isotope, its most abundant in nature.) This primordial nucleosynthesis is one of the three key observational pillars of the Big Bang model of cosmology. The other two are the expansion of the universe — measured as galaxies recede form one another — and the microwave background radiation — the radiation leftover after the birth of hydrogen atoms, some 400,000 years after the bang.

The primordial soup of particle physics

At about one minute after the bang, the matter in the universe included light atomic nuclei, electrons, protons, neutrons, photons, and neutrinos: the primordial soup. What about earlier? Going back in cosmic time means a smaller universe, that is, matter squeezed into smaller volumes. Smaller volumes mean higher pressures and temperatures. The recipe for the soup changes. In physics, temperature is akin to motion and agitation. Hot things move fast and, when they cannot because they are stuck together, they vibrate more. Eventually, as the temperature increases, the bonds that keep things together break. As we go back in time, matter is dissociated into its simplest components. First, molecules become atoms. Then, atoms become nuclei and free electrons. Then, nuclei become free protons and neutrons. Then what?

Since the 1960s, we have known that protons and neutrons are not elementary particles. They are made of other particles — called quarks — bound together by the strong nuclear force, which is about 100 times stronger than electric attraction (that is, electromagnetism). But for high enough temperatures, not even the strong force can hold protons and neutrons together. When the universe was a mere one-hundred-thousandth of a second (10-5 second) old, it was hot enough to dissociate protons and neutrons into a hot plasma of quarks and gluons. Gluons, as the name implies, are the particles that stitch quarks into protons and neutrons (as well as hundreds of other particles held together by the strong force commonly seen in particle accelerators). Amazingly, such strange quark-gluon plasma has been created in high-energy particle collisions that generate energies one million degrees hotter than the heart of the sun. (Here is a video about it.) For a fleeting moment, the early universe re-emerges in a human-made machine, an awesome scientific and technological feat. 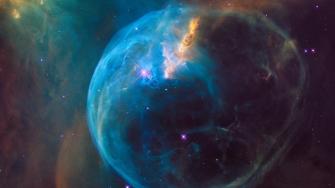 Is that it? Or can we go further back? Now we are contemplating a universe that is younger than one-millionth of a second old. For us, that’s a ridiculously small amount of time. But not for elementary particles, zooming about close to the speed of light. As we keep going back toward t = 0, something remarkable happens. At about one-trillionth of a second (10-12 second or 0.000000000001 second) after the bang, a new particle commands the show, the famous Higgs boson. If you remember, this particle became both famous and infamous when it was discovered in 2012 at the European Center for Particle Physics, and the media decided to call it the “God Particle.”

For this, we can blame Nobel Prize Laureate Leon Lederman, who was my boss when I was a postdoc at Fermilab, the biggest particle accelerator in the U.S. Leon told me that he was writing a book about the elusive Higgs, which he tried to but could not find at Fermilab. He wanted to call the book The God-Damn Particle, but his editor suggested taking out the “damn” from the title to increase sales. It worked.

The Higgs goes through a strange transition as the universe heats up. It loses its mass, becoming what we call a massless particle, like the photon. Why is this important? Because the Higgs plays a key role in the drama of particle physics. It is the mass-giver to all particles: if you hug the Higgs or (more scientifically) if a particle interacts with the Higgs boson, it gets a mass. The stronger the interaction, the larger the mass. So, the electron, being light, interacts less strongly with the Higgs than, say, the tau lepton or the charm quark. But if the Higgs loses its mass as it gets hotter, what happens to all the particles it interacts with? They also lose their mass!

Think about the implication. Before one-trillionth of a second after the bang, all known particles were massless. As the universe expands and cools, the Higgs gets a mass and gives mass to all other particles it interacts with. This explains why the “God Particle” nickname stuck. The Higgs explains the origin of masses.

Kind of. We do not know what determines the strengths of all these different hugs (interactions), for instance, why the electron mass is different from the quarks’ masses. These are parameters of the model, known as the Standard Model, a compilation of all that we know about the world of the very, very small. These all-important parameters determine the world as we know it. But we do not know what, if anything, determines them.

Okay, so we are at one-trillionth of a second after the bang. Can we keep going back? We can, but we must dive into the realm of speculation. We can talk of other particles, other dimensions of space and superstrings, the unification of all forces of nature, and the multiverse. Or we can invoke a pearl the great physicist Freeman Dyson once told me: most speculations are wrong. Readers are best served if we stick to what we know first. Then, with care, we dive into the unknown.

So, we stop here for now, knowing that there is much new territory of the “Here Be Dragons” type to cover in this fleeting one-trillionth of a second. We will go there soon enough.

A new model addresses a longstanding problem: where do quasars get the fuel they need to outshine entire galaxies?
Up Next
High Culture

Though gloomy and dense, Russian literature is hauntingly beautiful, offering a relentlessly persistent inquiry into the human experience.