Émile Zola (1840-1902) was a French writer and the most well-known practitioner of the literary school of naturalism. Before his breakthrough as a writer, Zola worked as a clerk in a shipping firm and then in the sales department for the publisher Hachette. He also wrote literary and art reviews for newspapers. More than half of Zola’s novels were part of a set of 20 collectively known as Les Rougon-Macquart, for which Zola had thought of the complete layout from the age of 28. Zola was nominated for the first and second Nobel Prize in Literature in 1901 and 1902.

Below, Zola briefly lays out the prerequisites for exceptional artistry: 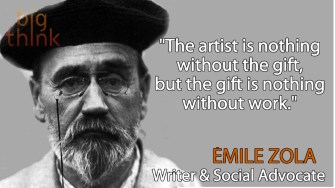 We always like to include a Big Think video clip in these points as an application of the historical figure’s words. Big Think has a wealth of videos about the artistic process, but the following clip featuring acclaimed choreographer Elizabeth Streb seemed to work best. In it, she dissects the work put in by students at her Streb Lab for Action Mechanics to push the limits of dance as an art form:

Are physicists about to decode a mysterious field of science that could have huge implications for your health?
▸
with
Jim Al-Khalili
Up Next
Words of Wisdom

“If you shut up truth and bury it under the ground, it will but grow, and gather to itself such explosive power that the day it bursts through it will blow up everything in its way.”