José Martí (1853-1895) was a Cuban national hero and an important figure in Latin American literary history. In his short life, he was a poet, an essayist, a journalist, a revolutionaryphilosopher, a translator, a professor, a publisher, and a political theorist. Through his writings and political activity, he became a symbol for Cuba’s bid for independence against Spain in the 19th century, and is referred to as the “Apostle of Cuban Independence.” His death was used as a cry for Cuban independence from Spain by both the Cuban revolutionaries and those Cubans previously reluctant to start a revolt. 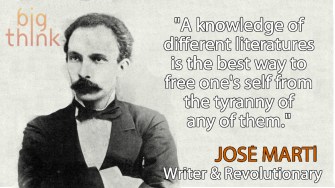 “A knowledge of different literatures is the best way to free one’s self from the tyranny of any of them.”

Related
The mind-bending physics of time
How the Big Bang gave us time, explained by theoretical physicist.
▸
8 min
—
with
Sean Carroll
The Learning Curve
The art of asking the right questions
The right questions are those sparked from the joy of discovery.
Starts With A Bang
Ask Ethan: Do my atoms really “touch” each other?
When you bring two fingers together, you can feel them “touch” each other. But are your atoms really touching, and if so, how?
13.8
Why the origin of life and the Universe itself might be forever unknowable
There might be a hard limit to our knowledge of the Universe.
Hard Science
200 years of exploring Antarctica
What we’ve learning from the world’s coldest, most forbidding, and most peaceful continent.
Up Next
Culture & Religion
We Know Nothing of War
If you have to say “never forget,” you’ve probably already forgotten.