Bob Bruner is the eighth dean of the Darden Graduate School of Business Administration at the University of Virginia. He teaches and conducts research in finance and management.  Before his[…]
Go to Profile 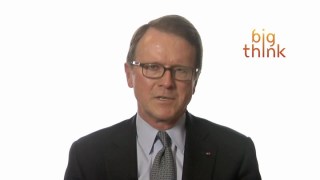 The panic of 1907 can tell us a lot about the crisis of the sub-prime crisis of 2007-2009. Both were fundamentally psychological phenomena—driven by fear and greed, rather than rational decision-making.

Question: What can the financial crisis of 1907 teach us about the crisis of 2007?

Bob Bruner: The panic of 1907 can tell us a lot about the crisis of 2007 to 2009, the so-called subprime crisis.  Crises have in common a number of attributes.  The first is, they are fundamentally psychological phenomena; they’re not driven by rational decision-making necessarily, they are driven by fear and somewhat driven by greed.  This is a lesson that is perhaps underplayed in the way schools and pundits talk about the financial markets. But the truth is, they are extremely potent forces in the world of business, these psychological forces.

What is it that drives them?  So as I describe—I and my co-author, Shawn Carr, describe in our book, "The Panic of 1907"—a fundamental factor driving such panics is information asymmetries.  Some people know things that other people don’t.  All panics take their route in the fact that information is not well-distributed.  Most panics are founded in the wake of extraordinary booms.  Booms tend to create more complex institutions, tend to draw naïve and less sophisticated players into the markets, tend to create wild expectations about the future.  All of which color the information people have the way they process it.

And then a jarring event occurs.  Typically it’s a failed speculation that brings down a financial institution and this makes people sit up and say: "Gee, I really didn’t know much about that institution, and if I didn’t know that institution, maybe I should be worried about the rest of them."  And hence a run on a bank begins, on many banks.  So we discover that information is just a fundamentally important phenomenon.  So I have argued to public policy experts and legislators that transparency is one of the most important antidotes to a crisis.  And frankly, it’s an antidote that would help to preempt a crisis.  If we can simply help the world see what is the health and well-being of a financial institutions, if we can be assured that the institutions have plenty of capital, the safety buffer with which to absorb unexpected shocks to the system.  All of these things would go a long way toward addressing the likelihood of another crisis.

And by the way, it is almost inevitable that there will be more financial crises.  We have not had a century without them and truly one of the deep lessons of 1907 and indeed the subprime crisis is that fundamentally we ought to retain enough walking around money and rainy day money in our bank accounts of households and businesses and governments.  So that we too can withstand the unanticipated shocks.

Why the Great Recession Isn’t the Great Depression.