The welfare state is broken. UBI is the smarter, more effective option.

Yanis Varoufakis
Yanis Varoufakis is the former finance minister of Greece and the cofounder of an international grassroots movement, DiEM25, that is campaigning for the revival of democracy in Europe. He is the author of And the Weak Suffer What They Must? and The Global Minotaur. After teaching for many years in the United States, Britain, and Australia, he is currently a professor of economics at the University of Athens. His most recent books are Talking to My Daughter About the Economy and Adults in the Room.
27 March, 2020

YANIS VAROUFAKIS: Universal basic income is a brilliant idea, especially in view of the failures of the welfare state. If you look at the welfare state now it is grown in to a kind of securitized, weaponized system against the poor. It is a system for humiliating the poor, for putting them through various hoops to prove that they are deserving poor. It's a very expensive system both in terms of the emotional effect that it has on the people that have to prove that they deserve benefits and also in terms of the actual economics of it. So the idea that everybody should have an income independently of whether they're rich or poor that comes from the collective. And then that can be the basis for them to unfold their talents and creativity without having to do demeaning work.
This is a great idea. The question is where is this income going to come from. I personally believe it should come from taxation and it should come from taxation for a number of reasons, one of them being political.
If you take, for instance, a blue collar worker that struggles all day in a factory or on a shop floor or working for Amazon, whatever, and you tell him – usually but it could be a her – that another person will be sitting on the couch watching television being supported by the state to do this you are creating a huge political clash there within the working class. So I'm against that. But if you say to the population independent of which social class they belong to that these days capital is socially produced – capital goods. Take for instance the stock, the capital stock of Google. To a large extent it is produced by all of us every time we search something on the Google search engine. We are adding to the capital stock of Google. This is not just a consumer transaction. So if capital is socially produced why are the returns to capital privatized? On what basis? To cut a long story short my proposal has been for a number of years now what we call a universal basic dividend. So I believe that a percentage of all shares – shares of all companies – should go into a public equity trust like a wealth fund for society and the dividends should be distributed to every member of society equally. So a universal basic income but the income comes from returns to capital, not from taxation.
Whether you agree with this universal basic dividend proposal or not it is clear to me, at least to me, that we need global governance. Take free trade. If you are going to have free trade and I do believe that we need free trade. I'm not in favor of erecting border fences and stopping people from selling their ways into our countries. If you're gong to have free trade you better have it along with regulations that make sure that there's no social dumping. So my advice, for instance, for somebody who agrees with Donald Trump against NAFTA is well you want to renegotiate NAFTA, renegotiate it but not in order to reduce tariffs but in order to say to Mexico if you want to continue as part of NAFTA you're going to have to pay a living wage to Mexican workers. So yes, I'm all in favor of global governance and in that context universal basic dividend could work and it could work quite nicely actually. 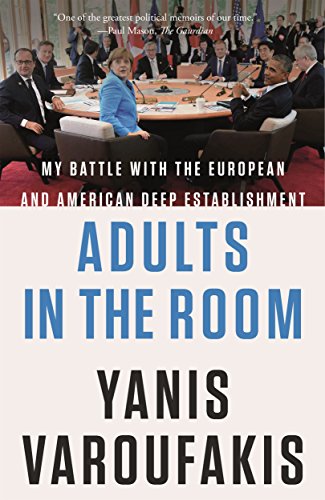 Adults in the Room: My Battle with the European and American Deep Establishment
List Price: $9.89
New From: $9.89 in Stock
Used From: $4.94 in Stock