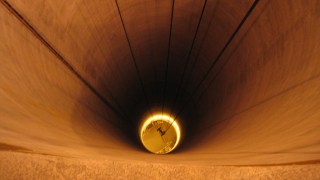 The Harvard physicist explains the design and goals of the 27 kilometer-wide proton-smasher in Switzerland that physicist hope will unlock the secrets of the universe.

Big Think: What is the Large Hadron Collider?

Lisa Randall: Well so what the Large Hadron Collider is—it's called the LHC more familiarly—it collides together two protons. So there's underground rings, an underground ring 27 kilometers in circumference. And what happens is proton beams go around and they're accelerated by magnetic fields as they go around. And they go in opposite directions, and there are two beams accelerated to extremely high energy, and then they collide together. And when they collide together, constituents inside the protons become energy, and that energy can turn into particles with mass because after all, E=mc2; which is to say if you have a lot of energy, you can make particles that have big mass. And so the idea is to make particles that you wouldn't have been able to have seen before on earth, because they're just heavier than things that would have been accessible to us. And by looking at what those particles are—"what are their properties, what are forces that apply at those scales?"—we're trying to understand what's happening at shorter distances; what's happening at higher energies; what are the more basic ingredients of matter; what are the more fundamental forces?

One thing we're trying to find is called the Higgs particle, which is associated with particles acquiring mass. But we're also trying to answer this big question about the hierarchy problem which might very well entail notions such as super-symmetry, which is an extension of space-time symmetry, or even space-time itself as we've discussed. And if it turns out these extra dimensional theories are right, there would be new particles called Kaluza-Klein particles—particles that have mass because they travel in extra dimensions. And it would be a radical insight into the nature of our universe. Kaluza was the first person who introduced the idea of an extra dimension of physics in 1919. And he was trying to unify the forces that were known then, which were only gravity and electromagnetism. And he proposed an extra dimension of space, and he realized Einsteins theory allowed an extra dimension, and he tried to work out the consequences of the theory.

Kline was the person who suggested that this extra dimension was tiny, it was rolled up, and thats why we dont see it. So Kaluza-Klein particles are named after the two of them.

Lisa Randall: What impact does your work have on the world?