Timothy Geithner is the president of Warburg Pincus, a Wall Street private equity firm. Before joining Warburg Pincus, Mr. Geithner served as the 75th secretary of the U.S. Department of[…]
Go to Profile 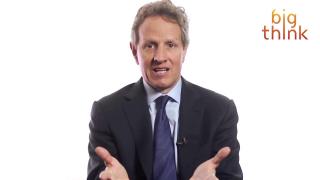 Former United States Secretary of the Treasury Timothy Geithner describes the importance of timing and action during a financial crisis. Geithner is the author of Stress Test: Reflections on Financial Crises (http://goo.gl/v0R9pg).

Timothy Geithner: it’s very hard in the moment, in that early stage to know whether it’s going to be systemic, run like stampede or whether it’s going to be more like a contained shock where the failure of an individual firm doesn’t light the rest of the system on fire.  Very hard to know.  So the optimal way, I think, to respond in some sense is you should let the fire burn for a while because that's just, makes sense, helps to make people aware of risk, helps to clean up the worst parts of the system.  But you have to be prepared to escalate very, very quickly if that fire starts to burn out of control to start to imperil the strong, not just the weak.  So it’s in the fog of diagnosis you won’t be sure up front.  And if you decide at the first sign of stress you act – you intervene aggressively to protect people from risk, that’ll be a different kind of mistake.  Because in that context you leave too much of the weak parts of the system alive and you’ll end up making a future crisis more likely.

But on the other hand if you wait too long as what happened in the United States because we didn’t have enough tools and authority initially until Congress acted, and you allow it to get momentum.  Then the consequences can be devastating, very hard to break the panic if it’s too powerful.  Very hard to put out the fire and it takes what you saw to know what you are able to do -  which is massive overwhelming financial force to again protect people from the consequences of the panic.

The Tradition and Beauty of Whole Hog Barbecue, with Michael Pollan