Philip Zimbardo is one of the most famous and prolific psychologists of the past half-century. Best-known as the father of the 1971 Stanford Prison Experiment, Zimbardo is also author of[…]
Go to Profile 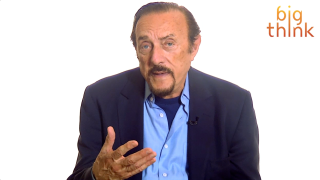 Philip Zimbardo on the Two Types of Heroes

A few years ago, Zimbardo founded the Heroic Imagination Project, a non-profit organization that harnesses the findings of social psychology to help regular people “transform negative situations and create positive change.” Here Zimbardo muses on the two kinds of heroes: the impulsive reactive and the reflective proactive.

Philip Zimbardo: Greetings. I’m Philip Zimbardo, Professor Emeritus of Psychology at Stanford University where I taught for more than 40 years. And now I’m also the president and founder of the Heroic Imagination Project. We are a San Francisco based nonprofit whose mission is to inspire and train people, young people as well as people in corporate America how to stand up, speak out and take action in challenging situations that you face.

So there are two kinds of heroes. One is the impulsive reactive hero, somebody who sees a child drowning and jumps in the river to save him. We had a great case in New York a few years ago of Wesley Autrey, a 50 year old African American man standing on a subway station at City College, 137th Street when a person falls off the platform across the tracks. Being in New York he knows subway trains come in every few minutes. There are 75 people on the platform. What do they do? It’s the bystander effect. They all look away. Not me. He has a reason not to get involved. He’s got two daughters. He turns to a stranger and says please take care of my kids. He jumps down on the tracks, puts the guy from across the tracks to between the tracks, puts himself on top of him, presses him down just as the train goes over their head. He survived by a half an inch. There was a half an inch between the top of his skull and the bottom of the subway train.

By another half an inch or if the guy just breathed it would have decapitated him and would be a sight that his children would never get over. So Wesley Autrey is an impulsive reactive hero. The other kind of hero is proactive who reflects. Somebody who sees something wrong, some corruption, some injustice, has to collect information, has to make a case, often has to get other people on her or his side. An example I want to give is someone I met recently is Michael Winston. He was the one who blew the whistle on Countrywide Mortgage. Countrywide Mortgage is a company in southern California that was really at the core of the economic meltdown of a few years ago. Why? Because they gave a huge number of mortgages to anybody who applied with no collateral, with no jobs. Low interest, you know, but then after two or three years all these places would get foreclosed.

But what they did is they gave everybody mortgages and then they’d bundle these. They mixed bad mortgages with good ones and sold it to banks all over. And in the economic meltdown lots of banks failed. So Countrywide Mortgage at the beginning hired Michael Winston. He was an executive at Merrill Lynch, had been an executive at Motorola – and his whole team – 20 or 30 people came with him. And he’s doing his business and suddenly he realized something is wrong. That he’s looking at these accounts, mortgages are failing, people can’t pay the fee. They can’t pay the fee because they didn’t have a job. So he confronts his boss and he says what is our rule? What is the criteria of giving a mortgage?

The answer he got was if the person breathes, we loan, you know. It couldn’t be more – so he was horrified. And he said, no, this is wrong. And there were other things that he noticed. Like there was asbestos, you know, problems. Many of the employees were getting sick. And so he challenged. He said, you know, I’m gonna quit. I’m gonna expose this. And they fired him then of course. And then they tried to buy him out. He went to trial, a jury trial, and he won a settlement of multimillion dollars.

Now the interesting thing about corruption at this highest level is Bank of America bought Countrywide Mortgage when it failed. And has paid millions of dollars in lawsuits, in legal fees and the settlement that Michael Winston won in a jury trial was overturned recently by a single judge with no new evidence. That’s against the law. That can’t be. So again Michael Winston is fighting that but all of the fighting means, you know, again huge legal fees. The good news for me is that I lectured with Michael Winston. He’s an incredibly refined, knowledgeable young man. He has a Ph.D. in psychology, organizational psychology. He’s joined my Heroic Imagination Project team as director of corporate initiatives. And together we are designing programs for corporations to promote cultures of integrity, to indicate that companies that model best practices, companies that model the most upstanding principles end up as the most profitable. It’s not a trade of profits versus, you know, versus principles.

How to Persuade Others with the Right Questions: Jedi Mind Tricks from Daniel H. Pink