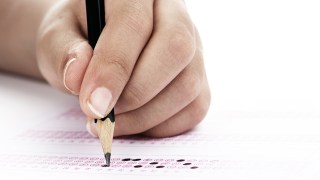 We Need to Teach Kids Creative Thinking, and We’re Teaching Them the Opposite

"Education is far less about a set of facts than a way of thinking," says professor and theoretical physicist Lawrence Krauss. "And therefore what I always think should be the basis of education is not answers, but questions."
▸
3 min
—
with
Lawrence M. Krauss

“Education is far less about a set of facts than a way of thinking,” says professor and theoretical physicist Lawrence Krauss. “And therefore what I always think should be the basis of education is not answers, but questions.” In this video interview, Krauss explains why it’s vital for young students to be taught more than just basic skills. They need to be taught to solve the sorts of problems not conveyed on a test. An adequate curriculum could only be derived from the wisdom of experts. This is why Krauss supports the idea of a common core, although not one hinged on stringent testing. “Being able to know specifics to pass a test is not the same as being able to understand how to go about answering those questions.”

Lawrence Krauss: Education is far less about a set of facts than a way of thinking, than learning how to critically think. And therefore, what I always think should be the basis of education is not answers, but questions. We should teach kids how to question. Now having said that, of course, to be a productive adult there are certain skills that are required — reading, writing, and in the old-fashioned days we used to say arithmetic. Now we say mathematics. And it’s important that we provide students those basic skills. And in that sense, I’m in favor of a common core because I think there are certain things that most reasonable educators and most reasonable mathematicians and scientists and historians would agree are a part of what every modern literate person should have as a tool to go out and look at the outside world.

I am in favor of saying okay, let’s get teams of educators and experts in certain disciplines to say, "What are the basic things that we think are an essential part of an early education for people?" Put them together and create as well as possible a set of goals and tools to learn those things. One thing I cannot understand and people are probably going to be upset about this is why local school boards have control over educational content. Because local school boards are inevitably made up of individuals without any training. One of the reasons we send kids to school is to help protect them from their parents — in a good sense. I mean most parents want their kids to learn; they're good, but the point is the reason kids are outside the house is so they can get exposure to things that might take them beyond the biases that they learn at home. And if we send them to school we should take them beyond the biases that are present in local school board members. There should be standards that are based — that are determined by educators, not by people who for one reason or another run for election to a local school board. So a common core is something I’m in favor of. What I’m not in favor of, by the way, is standardized tests, however. Testing always inevitably means you teach students to be able to do tests. And I’ve seen it at all levels, including, by the way, at graduate school. We have many grad students, say, from China who are excellent at taking physics tests, but when they want to become researchers — just being able to regurgitate information is not what makes you a creative researcher. And I think the same is true for a young person. Being able to know specifics to pass a test is not the same as being able to understand how to go about answering those questions.

Hey Bill Nye! How Did You Come Up With the Idea for the LightSail?