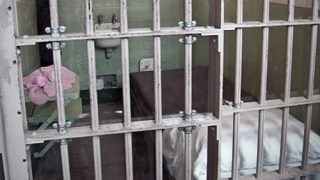 African-Americans are imprisoned at seven times the rate of whites. Intentional discrimination is a factor in this—as are poverty, educational attainment, urban density, and white flight from urban centers.
▸
10 min
—
with
Robert Perkinson

African-Americans are imprisoned at seven times the rate of whites. Intentional discrimination is a factor in this—as are poverty, educational attainment, urban density, and white flight from urban centers.

Question: How has racism factored into your study of the penal system?

Robert Perkinson: I think they are entwined in ways that we haven’t fully appreciated.  We’ve seen over the past two generations, really you know breathtaking progress in terms of civil rights.  My grandparents on my mom’s side are from Mississippi. Their parents were involved in... my great-grandfather was involved in driving the blacks out of a little county in Mississippi, and my 90-something year old grandmother pushed her walker down to vote for Obama in the fall of 2008, and that was stunning for her.  I mean something she couldn’t have imagined for most of her life.  But, you know, over the same period of tremendous progress, we’ve seen measurable disparities along racial lines and criminal justice worsen.

It used to be that the prison population in the United States was mostly white, now it’s mostly black and Latino.  Before desegregation, the rate African-Americans were going to prison at roughly the rate of four times the rate of whites, now they’re roughly going to prison at the rate of seven times the rate of whites.  So, it’s a huge contradiction in what’s happened in American race relations and that’s something that civil rights organizations and the media and public policymakers have not been paying attention to.

Question: Why has the racial disparity in prisons become so drastic?

Robert Perkinson: I mean, like everything in our inchoate criminal justice system, it’s difficult to disentangle all of the variables.  There is certainly intentional bias in racial profiling by police, in the ways that judges regard certain defendants, even in the ways that probably Public Defenders and certainly Prosecutors and Juries do, and Parole Boards.  So, the role of intentional discrimination shouldn’t be minimized.  It’s still present with us even in the post-civil rights era.  But there are a lot of other factors as well.  You can’t very well disentangle it from poverty, educational attainment, urban density, white flight and capital flight out of central urban areas where crime, and even more than crime, incarceration has been most concentrated.

And then too, it is also important for people to know that there is all sorts of ways that race has—that racial divisions have worsened in criminal justice in unanticipated, unintentional ways.  Just one example, in the ‘90’s all sorts of legislatures passed laws to enhance penalties if you sell drugs near a school... say 200 yards, 2,000 yards from a school.  Well, it turns out that in rural areas, almost every place you might sell drugs is more than 2,000 yards from a school.  In the Bronx, or dense parts of Los Angeles, or Washington D.C., every place on the map is within 200 yards of a school or almost, and that means that all defendants who are getting charged with drug crimes in that area, whether school kids were involved or not, are getting those enhanced penalties.  Whereas, the meth dealer in rural Nebraska gets a comparatively lighter sentence.  And that’s had a big, big racial impact.

Crack cocaine is less—even the racial disparities caused by the differences in sentencing for crack versus powdered cocaine.  And we now know these two drugs are identical, pharmacologically.  That’s had an even more dramatic racial impact.

Question: Why is it important to talk about race when we talk about incarceration?

Robert Perkinson: There are a lot of criminal justice advocacy organizations that are not sure whether it’s a good idea to stress race.  It could be a divisive, could cut into our ability to put together large coalitions as we are trying to reverse some of the prison growth and severity that has accumulated over the past 40 years, but I think in order to really turn in a new direction and to move out of a policy regime that has had such transformative effects, not just in criminal justice, but in urban communities and social welfare policy and just social stratification in the United States generally, that you have to really honestly recon with the causes and there are a lot of scholars who proposed all sorts of reasons for why the U.S. has built this exceptionally large system, and I think the change in racial politics is really the only thing that can explain it fully.  Or that we need to think of that central causative variable.  I mean to put it a little too simply, what I think happened is a kind of echo of what happened at the end of Reconstruction, when conservatives, white supremacists in that case were able to kind of roll back the expanded freedom after emancipation and install piecemeal, Jim Crow segregation, which then ruled the states of the former Confederacy in a kind of state of sort of quasi-freedom for another century.

And segregationists—conservative segregationists Democrats, originally, like Strom Thurmond in the ‘50’s when the civil rights movement was getting rolling, they seized upon crime as one of their oppositional ways of building opposition to desegregation and Strom Thurmond famously warned that there will be a wave of terror and crime and juvenile delinquency if integration of the races goes through.  And when integration of the races did go through over their objections and those southern conservatives were defeated, they retreated to criminal justice as a way—and law enforcement, in particular, as a way to kind of police this incipient social order that they feared and had fought against.

And so the very jurisdictions I found that had fought against desegregation most vociferously have become the nation’s most vigorous jailers.  And it’s sort of as if we’ve institutionalized the view of Texas’ U.S. Senator Joseph Bailey who once said that, “Hey, I want to treat the negro fairly as long as he behaves himself.  And if he doesn’t, I want to drive him from this country.”  And in essence, the United States has done that.  We have, in a sense, banished a generation of urban youth to a series of carceral institutions and it’s disproportionately those... you know, there’s people in the middle class who achieve higher levels of educational attainment and income in the African-American community who are not experiencing these disproportionate levels of incarceration, although they are more likely to get stopped by police and so on, but it really is most concentrated among the urban poor.

So, for example, young black men in America who don’t graduate from high school, 60% of them end up in prison. That’s more than join the armed forces, or go to college.  It really has become a central stage of life for a whole generation of American youth.  And that really has, to the extent that the Civil Rights Movement was about expanding opportunities, making life better for African-Americans, making the United States generally a pluralist democracy, criminal justice has to a significant, if in the mainstream media, under-emphasized extent, rolled back many of the gains of the Civil Rights Movement.

Question: Is there a sense of inevitability about prison among African-Americans?

Robert Perkinson: Certainly, there’s a lot of familiarity in certain neighborhoods across the United States with imprisonment.  One in nine African-American kids goes to sleep every night with one parent in prison.  One danger some educators worry about, is yeah, by talking about these statistics that shows so many young black men and a lot of black women too, although not in the kind of same percentages, are ending up in prison, especially for drug crimes, that they will feel or develop a kind of nihilistic sense of the future.  I hope that is not the case.  You know, there is a lot of critique of the criminal justice system in hip-hop music, for instance.  It does have the effect of surely making people distrustful toward the government, distrustful toward law enforcement.  We see that in some kind of jury nullification and Washington D.C. and the anti-snitching campaign in Baltimore, and so on.  So in that sense, it actually, by having such a racially disproportionate impact of criminal justice policies we can actually undermine law and order and public safety.  But I don’t think there are cultural factors that lead to greater law breaking once you... there higher rates of arrest among African-Americans than among whites, there is no doubt about that.  But once you factor out education, history of child abuse, the family dynamics, poverty—and there are a lot of those variables; you can’t just take out one and explain it—you find that there are all sorts of socially determining factors rather than any sort of racial, cultural pathology I think.