Sherry Turkle is Abby Rockefeller Mauzé Professor of the Social Studies of Science and Technology in the Program in Science, Technology, and Society at MIT and the founder and current[…]
Go to Profile 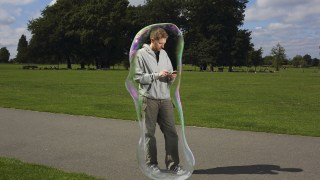 Are Our Smartphones Trapping Us in Anti-Social Bubbles?

Our mobile devices provide so much stimulation that they capture our entire attention, even when we're with other people in social situations. Smartphones isolate us; ironically, they rob us of true solitude.
▸
4 min
—
with
Sherry Turkle

By now the debate is a familiar one, though we seem no closer to an answer. Are our smartphones making us antisocial? Are those who answer, “Yes,” just curmudgeons about technology? Professor of social science and technology at MIT, Sherry Turkle, says never before has a device removed us from our immediate surroundings so completely. “We’ve never had a device where you could be taking a walk in the woods and you didn’t need to be taking a walk in the woods,” she says. At stake is nothing less than our conversations with friends and loved ones — a primary medium of socialization — and our own solitude wherein we learn and define who we are as individuals.

Now solitude is one of the things that constantly going to your phone is taking away from us. There's a study, a dramatic study — I was going to make a bad pun and say a stunning study; I think in Reclaiming Conversation I actually made this pun unintentionally and now I feel I have to apologize for it — where college students are asked to just sit in a chair, the way I'm sitting in a chair, without a book and without a device. And they're told that they're going to be asked to do that for six to 15 minutes and when the study begins they're asked, "Do you think you'll want to give yourself electroshocks during this time?" And like they say, "Absolutely not. No." After six minutes, they're giving themselves electroshocks rather than sit quietly with their own thoughts.

In our culture, so used to being able to go to a device, we treat being alone as a problem that needs to be solved and we want to solve it with technology and we do solve it with technology. And when people say to me, "Oh there's nothing new under the sun; we've always had books; we've always had television; we've always had something, something, something; you know, isn't this just the same old same old?" I say, "You know what? No. No, actually not." We've never had a device that could turn us away from other people just by going like this and all of a sudden you're in your own private space with a world of other people on your phone. And we've never had a device where you could be taking a walk in the woods and you didn't need to be taking a walk in the woods. And this is a new challenge for us to recognize how much we need solitude and to reclaim it so that we can reclaim conversation.