Thupten Jinpa Langri has been a principal English translator to the Dalai Lama since 1985. He has translated and edited more than ten books by the Dalai Lama including The World of Tibetan Buddhism (Wisdom Publications,[…]
Go to Profile 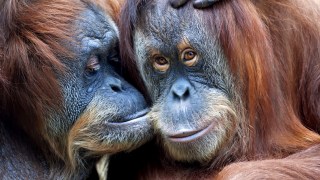 Thupten Jinpa explains how recent advances in neuroscience have allowed for a better understanding of the science of compassion.
▸
3 min
—
with
Thupten Jinpa

Throughout his life, Thupten Jinpa (the Dalai Lama’s primary English translator) has studied the connections between science and compassion. In his latest book, A Fearless Heart, Jinpa builds off a landmark lecture given at Stanford Medical School to explain how we can take a scientific approach to train our compassion muscle to relieve stress, fight depression, improve our health, achieve our goals, and change our world.

Thupten Jinpa: When we talk about the science of compassion, it’s also tied down with science of empathy. Empathy is compassion, altruism, kindness. They are all very interrelated and much of the current scientific studies really fall into two main categories. One is the study of altruistic behavior, particularly in animals and very young children. And the thinking is that if we can see altruistic behavior in animals and very, very young children, that it must have very deep biological roots. So that’s the kind of logic behind why they are focusing more on animal studies and children. The other important area that overlaps the science of compassion is the study of empathy. And again here, a lot of the work has been done on nonhuman primate studies and there is an American professor at Emory by the name of Frans de Waal and he was one of the pioneers. Many people might have seen the video of apes, you know; there were two juvenile apes fighting and one of them loses and another ape who’s not a blood relation comes over and hugs him and consoles him. So it clearly is an indication that empathy can be found in nonhuman primates as well.

And then there are some interesting studies coming from the studies of meditators who meditate many hours on compassion and then looking at their brain. You can actually see the brain’s expression in action. So this is called functioning in an MRI, which has the ability to look at a brain in action as it were. At least the claim is that the meditators are, unlike novices like us, have some ability to consciously direct their attention and thoughts so in the scanner, the brain-imaging scanner, you can ask the meditator: Can you do this? Can you do that? Can you just stay on the level of empathy and feel the pain? Now can you move onto compassion, wishing the other person to be free of suffering or wanting to do something about it. And try to tease out what brain signature, brain regions get activated when you are just in empathy feeling and when you are moving onto compassion when you are wishing to see the relief. In this way, the whole mapping of the brain regions that are involved in something like compassion is beginning to be done.