Sarah Kay is a poet from New York City who has been performing her spoken word poetry since she was fourteen years old. She was a featured poet on HBO’s[…]
Go to Profile 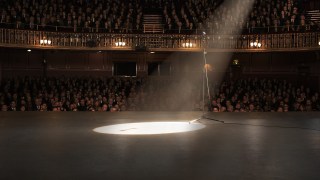 How To Command an Audience: Tips From a Spoken-Word Poet

Spoken-word poet Sarah Kay gives insight into how a person can command an audience and embrace, or even invite, authenticity through mistakes.
▸
5 min
—
with
Sarah Kay

There are a number of myths surrounding public performance that spoken-word poet and co-founder of Project Voice Sarah Kay helps to dispel. Perhaps the chief myth is that you can’t both be nervous and enjoy the experience of public speaking. In reality, being nervous is an inevitable part of the experience, but understanding why the audience came to see you — they just want to have fun — can help conquer your fear. Kay has plenty of tips and tricks that will make you feel more comfortable on stage and in the process of preparing your performance or speech.

Some artists try to zone out while they’re performing. Perhaps because it is strange to be the spectacle, to know that everyone in the room has their eyes on them, ears on them, hoping they’ll be great but squinting hard to catch mistakes. It’s easier to go through a speech imagining all the audience in their underwear, just as embarrassed and ashamed. But it’s not better.

Button Poetry alumni Jesse Parent and Neil Hilborn stay similarly attuned to their audience. They can tell when the audience is getting sucked in. Jesse Parent listens to the laughter in the audience, and holds off on continuing his poetry until it dies down, reacting to the whoops and cheers of the people listening.

It’s such moments that capture something deeply mesmerizing: honesty. Kay thinks those unplanned moments are when the truth comes out. When an accident happens on stage, it’s the most authentic and real thing about the whole show. That’s the moment of connection between the watcher and the speaker. It’s the speaker’s job to create an experience for every member in the audience, and while this can be incredibly hard, especially as Kay recalls performing for 3000 people, it isn’t impossible. But to do it, you can’t imagine your audience isn’t there, and can’t pretend they’re too busy being humiliated in their underwear to be paying attention. They are looking at you. Face it. Smile back.

Kay refines her performances by listening and paying attention to every person in the audience. As Jesse Parent holds up his hand to acknowledge the people in the audience, Kay remarks on the person in the red sweater and jokes on their surroundings or the news of the day to show everyone that this is a moment, not just a speech.

Sarah Kay: The more comfortable I get as a performer over years and years and years of practicing and performing over and over again for lots of different audiences, the more present I am able to be in the room. So instead of losing myself in performance I actually find my exact location in a very visceral way. So I become increasingly aware of everybody in the audience and what they’re doing. I know who is falling asleep. I know who is checking their phone. I know who is picking their nose. I know who is wearing a red sweater in the front row. Because when I’m nervous I can’t do that, right. When you’re in your head and oh I’m performing and oh no I hope this goes well. It’s very difficult to be physically present with all those people because it’s too much coming at you. But when I’m in the zone and I’m excited and I’m tuned into this performance I’m able to be very much aware of who’s here which I think is helpful because it allows me to be performing specifically for this room. The way that I perform for a classroom of fifth graders is very different from the way that I perform at a dive bar or the way that I perform for a stadium of 3,000 people. And it should be. You should feel a difference in my performance if you’re in the audience for one of those shows. So I think when I’m on stage if I’m having a great show and I’m really tuned in you can tell because I’m able to be very much aware and present with the people in the room and create a show that is meant for them.

I try to look for opportunities to communicate that I am in the same room that they’re in. So if I can make a joke about something that’s happening here or if I have a reference to what city we’re in or if someone’s wearing a tee shirt that I recognize and can associate with. Anything like that is a way of communicating I am in the same space you are and we’re participating in something together which also allows some part of an audience’s brain to go oh, I really had to be here which is a nice feeling to have as an audience member. It’s a way of acknowledging that they’ve taken the time to be in this space with you and you want them to know that you’re aware of that.

Something that I think I will never get over is the fact that it is a genuine gift when people are willing to sit in an audience and give you their time and attention and breath. That’s something that they could have spent anywhere else but they chose to give it to you here. And it’s something that I’m very cognizant of when I’m on stage. And a big part of what I want to do when I’m on stage is find a way to acknowledge those people that have come and are here in this space and create an environment that acknowledges that and also rewards them for that. How can we attune ourselves to what’s happening in this room so that later everyone leaves feeling like oh I really had to be – I really had to be here for that. I’m glad I was a part of what happened tonight.

I had a teacher in college who used to say that when you’re watching a play on a stage if somebody spills a glass of water. That’s the most important thing that happened in that scene because that wasn’t fake. Nothing about water spilling is fake. You see the water and everyone in the room goes that’s water and it just spilled and that’s the only thing you can focus on because that’s the most authentic piece of what’s happening in the room right now. Or if someone, if there’s an accident and someone gets hurt. That’s the only thing you can focus on because it’s the most authentic real thing that’s happening in the room. So I think when people are delivering content and they’re focused only on themselves, their delivery, what they’ve practiced, what they’ve rehearsed, what they’ve done to the mirror and they’re not aware of the room oftentimes they’re performing in a vacuum and other people can tell. People in the audience are like this isn’t for me, this is for themselves. This is in their own brains. I think the most powerful thing people can do is to spill the glass of water, not literally but to find a moment that is real, to find a moment that is actually happening here in the room with the people here and to let them know I’m with you here, not in my own vacuum practicing to the mirror somewhere. That what’s happening here is a real moment and you can create that by acknowledging something in the room, by referencing something that happened earlier that you were all witness to.

Why Our Hearts and Minds Are Easy Targets for Con Artists, Holy Men and Cult Leaders