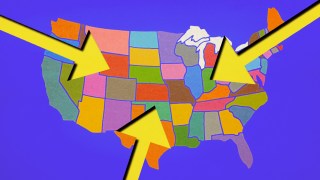 How immigrants and their children affect the US economy

Slowing workforce growth can affect American GDP growth unless we focus on skills training and immigration reform, says Robert Steven Kaplan, the President and CEO of the Federal Reserve Bank of Dallas. Without immigrants, our workforce would not expand, he argues, based on the fact that immigrants have made up more than half of the workforce growth in the United States in the last 20 years.

Immigrants and their children, based on our work at the Dallas Fed, have made up more than half of the workforce growth in the United States in the last 20 years. Immigrants and their children. And it’s our judgment that in the next 20 years that percentage will be even higher, because the existing workforce is aging and will age out of the workforce. So while it’s very controversial and a sensitive subject, obviously, we’re going to need to come to grips in this country at some point with immigration reform that helps us find a way to grow immigration. And I believe that is going to be an essential element also of growing the workforce in the years ahead.

The ten year treasury is lower, interest rates generally are lower than we’ve historically become accustomed. There’s a number of reasons for that but one of them is I think the markets are expecting relatively sluggish GDP growth in the years ahead and one of the primary reasons for that is slowing again workforce growth.

So Japan is a great example of an economy that is suffering from aging demographics to a greater extent even than the United States. And as a result of that their GDP growth has steadily declined, and the problem is culturally and structurally there’s not a lot they are able to do—meaning they’ve worked on getting women back into the workforce or getting them to participate to a greater degree in the workforce, but that’s basically run its course. And they are not culturally receptive to immigration.

Back to the United States. We’ve also had a trend in the U.S. where women increasingly joined the workforce, and that helped workforce growth. But that trend has also plateaued. And the reality is unless we take some action we’re going to have very sluggish workforce growth in the years ahead.

So what are some actions that could be taken to address it? Number one: we call it skills training, workforce development, middle skills training. That means there’s a skills gap in the United States. There are more skilled job openings than there are supply of skilled workers.

The second thing that historically this country has done to grow the workforce has been immigration.

Obviously fertility helps but it helps 20-25 years from now with a lag. And so if we don’t take some action we’re going to have slowing workforce growth in the next 20 years and it’s going to create a headwind for GDP growth.