Mark Epstein, M.D. is a psychiatrist in private practice in New York City and the author of a number of books about the interface of Buddhism and psychotherapy, including Thoughts[…]
Go to Profile 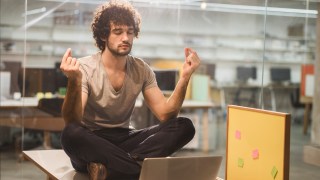 How Not to Be a Slave to Your Brain: Mindfulness for Mental Health

One of the classic definitions of mindfulness is that it helps us not cling to what is pleasant and not condemn what is unpleasant.
▸
5 min
—
with
Mark Epstein

Big Think and the Mental Health Channel are proud to launch Big Thinkers on Mental Health, a new series dedicated to open discussion of anxiety, depression, and the many other psychological disorders that affect millions worldwide.

One of the classic definitions of mindfulness is that it helps us avoid clinging to what is pleasant and condemning what is unpleasant. In this video, psychiatrist Mark Epstein relays information about the practice of mindful meditation and its many mental health benefits.

Mark Epstein: One of the classic definitions of mindfulness is that it helps us not cling to what's pleasant and not condemn what is unpleasant. An example would be if you're driving in New York City and someone cuts you off; that's unpleasant and one would instinctively have an angry response. But that's happening all the time and if you have an angry response too often, then you become a nightmare yourself. So what mindfulness is teaching is that the stimulus, which is someone cutting you off, is different; it's distinct from your emotional reaction to that thing. So someone could cut you off; you could feel the anger, but you don't have to act on the anger. So instead of being driven by your reactions there's a little bit of room where you can choose to be a different kind of person. So mindfulness basically helps us tolerate the aspects of the external world and the internal world that otherwise are hard to face.

It's really only in the past 50, 60 years that the medical establishment has been exposed at all to what mindfulness is. And for 20, 30 of those years it was like just a new age thing. It was on the periphery. And only through the work of a couple of people like Jon Kabat-Zinn has mindfulness come into the medical establishment. There are a lot of studies that are being done now that are showing the benefit of mindfulness for all kinds of conditions. And some old colleagues of mine have done some very good work showing that the steady practice of mindfulness light up areas of the brain that have to do with modulating emotional reactivity. So I think there's beginning evidence that the brain is plastic, more plastic than we initially thought and that what you feed into the brain actually changes the architecture of the brain so that it's possible to promote, to develop the areas of the brain that are there for kindness, you know, for altruistic feeling and for the regulation of difficult emotions.