Jon Acuff is the New York Times best-selling author of five books including his most recent, Do Over: Rescue Monday, Reinvent Your Work and Never Get Stuck. For 16 years, he’s helped some[…]
Go to Profile 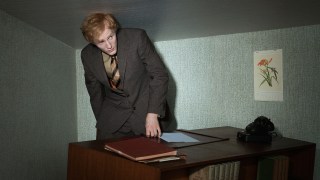 2 Ways to Know If You’ve Hit Your Career Ceiling

How you feel about your job is obviously an important indication. The other is whether your company encourages you to learn skills that will keep you — and the company — relevant.
▸
6 min
—
with
Jon Acuff

Why didn’t Kodak or Polaroid invent Instagram? If any company was poised to understand the role of photography in life, and where the future would take it, the smart money must have been on the industry giants. Instead, they protected their legacy technology and went bankrupt. The lesson, says Jon Acuff, is that companies can hit a career ceiling just like individuals.

According to Acuff, 70 percent of Americans don’t like their jobs and are prepared to do nothing about it. If your job “owns your weekday and haunts your weekend,” then you’re probably among the majority. So it’s important to be honest with yourself about how you feel about your job and to take a critical look at the support your company is offering you. Are they encouraging you to learn new skills that will keep you relevant in the industry? Or are they protecting past success and willfully neglecting the future?

Identifying whether you’ve hit a career ceiling is the first step toward taking action.

Jon Acuff: A career ceiling is when you get stuck and it can happen a couple of different ways. It can be the 70 percent of Americans who, according to Gallup, don’t like their jobs but don’t do anything about it. They’ve just kind of accepted that a job is just a job and this is what I do for the rest of my life. We eat at TGI Friday’s, not TGI Monday’s for a reason. The Office was a popular show for a reason. Dilbert books sold a lot for a reason — because we get stuck. For me that was climbing to the top of a career ladder and maybe that’s something you relate to. I was 32 years old and I worked at AutoTrader and I had a great job, but I was a senior content designer and there was no super-duper senior content designer position above that. I had come to the end of that ladder and at 32 that was overwhelming to think, "Okay, my career ball has already stopped rolling and this is where I am." Companies get stuck too. They hit ceilings. I read a great article in The New York Times that asked why didn’t Kodak create Instagram. Why didn’t Polaroid create Instagram? Of all the people that should have understood our love affair with photography why did they miss it and what happens for a company is that you start with innovation and risk. But then when things go well, you tend to move from innovation mode to protection mode. And you start to protect the things you’ve already built so nobody can walk in to Kodak and say I have an idea for an app. You know, it won’t make any money, but at the end of two years it’ll be worth a billion dollars. So they got stuck and industries get stuck too. I spoke to a group of orthodontists and to be an amazing orthodontist right now you have to be good at social media, email marketing, and running a business. Do you know what they don’t teach at orthodontic school? Social media, email marketing, and running a business. So they have a choice to get unstuck. And the key when you hit a career ceiling is to work on your skills. It’s impossible to get stuck somewhere old if you keep learning something new. And that’s the concept of a ceiling.

What are some signs you’ve hit a career ceiling? Yeah, what are some signs you’ve hit a career ceiling? The sense of just repetition over and over again. You know you’ve hit a ceiling when you feel Monday on Sunday. When it’s Sunday at noon and you could already feel Monday, that Monday’s creeping into your weekend. And you know you’ve hit a ceiling where you have a career that owns your weekdays and haunts your weekends. And you see that happen a lot where people can’t even really enjoy vacation. If you’ve ever had that feeling where you go on a weeklong vacation and right at the last day you finally have that sense of, "Okay, I can do this." And the next day your vacation is over and you go back to work and you stand wistfully in the break room and kind of look out the window with a sad cup of coffee and think, "I was free once and it was yesterday." You know when you’ve hit a ceiling. Or you’re not growing. You’re not being challenged at work. There’s a large part of you that’s not getting to enter the building. If you’ve got, say, 10 different skills, 10 things you’re good at and you get to do one of them at work and 90 percent of you, the best parts of you have to get left at home, then there’s a chance you’re on a ceiling. The other way you know is if your industry starts leaving you behind. If you’re a graphic designer for instance. I meet a lot of graphic designers and they tell me Jon, I remember in college there was a time where I could take an online design class for fun as an elective. And then one day I woke up and if I didn’t know how to design for the Internet, I was a dinosaur and the industry had changed. And so a lot of times you know you’ve hit a ceiling when your industry is changing and there’s new technology or new things you need to know how to do and you’re not learning those and you’re trying to protect the old way and meanwhile the industry is going, "These are the things that matter. These are the new currencies." Those are signs that you’ve hit a ceiling.

The most important thing you can do on a ceiling when you hit one is to start to develop your skills. Skills are the hammer that helps you break through a ceiling. It’s not your attitude. I used to think that maybe if I just developed a bad enough attitude and slammed my head into the ceiling long enough and hard enough that would fix things. But no, it’s skills you need most because when you do something positive, when you have a positive experience in your life — say you’re going to start a blog or move to a new city or kind of jump out there. I like to talk about jump moments a lot. That feels great on day one. Every other day after that is you working on your skills. If you’ve ever started a blog, the first day is amazing. You get a URL; you get Google analytics. You go, "Somebody in Copenhagen is reading my blog." It’s amazing. And every other day after that is you working on it and developing the content and developing the skills. So when you hit a ceiling, it doesn’t have to be a bad thing. It could actually be a laboratory for you to get better. It can actually be the gym. Hitting a ceiling is leg day. Nobody likes leg day. But it’s your chance to separate yourself from all the other people that aren’t going to put in the work, that aren’t going to develop the new skills. I think about an industrial designer my friend worked with and he hit a ceiling moment. He was amazing at sketching things by hand, amazing at it, but his company said we need you to learn AutoCAD. AutoCAD is where we’re headed and for a while he fought it and said I’m faster. I can write these amazing sketches with hand. But eventually he lost that and he lost his job. And so when you hit a ceiling you have a choice. You can change it. You can work on your skills or you can stay stuck and eventually lose your position, lose your relevancy. And I’ve hit a ceiling right now myself. I write books and I speak a lot and I do a lot with social media and I asked a room full of high schoolers as a blogger who here reads blogs. Nobody raised their hand. I thought good to know. And I said well what mediums do they use. And they all said they’re on Snapchat and they all mentioned these things that I’m just not part of right now. So I have a choice. If I want to stay relevant to the next generation, if I want to be able to speak about career, which is something that starts as young as high school I might need to be on Snapchat. I might need to look at different technologies and go be part of that conversation. So when you bump into a ceiling, that’s where you stand. Where you develop the skill to get past the ceiling or will you stay stuck?