Inflection points: How to see when the economy is about to shift

It's hard to see big changes coming, but if you know your own blindspots, you can do it.

Rita Gunther McGrath
Rita Gunther McGrath, a professor at Columbia Business School, is one of the world’s top experts on innovation and growth. She is the best-selling author of The End of Competitive Advantage (Harvard Business Review Press, 2013). Her new book Seeing Around Corners: How to Spot Inflection Points in Business Before They Happen will be published in September.
28 February, 2019

RITA MCGRATH: So an inflection point in business is something that changes, usually in the environment, that causes the assumptions underlying the way business works to change in some meaningful way. So if you think about it, any business is born at a particular historical moment in time. And there are certain things that are possible at that moment which guide the way that that business develops. And what predicts its success. So if you've been with a business for a long, long time, that kind of becomes second nature. And it's almost like a fish in water. You don't even think about it.

So what happens with an inflection point is all those assumptions get shifted, and it feels like a very different world. Now the good thing about inflection points is it's a bit like the old line from the Hemingway novel, "gradually, then suddenly" when asked about how you went bankrupt-- well, gradually, and then suddenly. So if you're paying attention, you can see the oncoming inflection points way before they happen. So let me give an illustration if you're a traditional power company, let's say, your whole business model is premised on centralized generation of power of some kind and then distribution through a grid. Your only customer is essentially the regulator. Everybody else is a user. And so your job, literally, is to keep the lights on, and all the metrics that you use have to do with that central megawatt generating power model. Once you start to have renewables, distributed power, smart grids, that number, that metric, becomes less meaningful. And so now, you've got to really rethink your whole business in order to accommodate that post-inflection point world. So that's how I think about an inflection point. It changes the metrics that you use to predict success in a business.

How you spot them is you really have to go out to the edges of your organization to see the early warnings of where things are starting to brew. Andy Grove, who wrote a very famous book about inflection points back in the 90s called Only the Paranoid Survive, had a great phrase which I've transformed into snow melts from the edges. So as an executive, how do you get out to the edges of your organization, of your industry, of your context to make sure that you're picking up those early warnings that things may be about to shift? So I think there are a number of reasons why people miss inflection points when they're happening. I think the first is that you just get so used to the way things are that you're not really paying attention. So it's not so much heads in the sand as just heads, like, looking straight ahead, you know, and looking up, not looking down, not looking around at all. So I think that's the first thing.

The second thing is acknowledging that things could be really different can be very scary. And everything you do, every bit of success you've had, is premised on a certain model for how things work and if you start to pick up early warnings that that model may be changing, that could be very threatening. And so there's a very human response to not want to take that in. And I think the third reason is people spend so much time being busy that it's very hard for them to take a big step back and say, you know, what could be changing in our environment? What assumptions do we need to challenge?

I think the last thing is, you know, we tend to surround ourselves with people who are a lot like us. And so we're with people who have the same world view. We're with people who have the same opinions. We're with people who talk to the same people. We watch the same television, blah, blah, blah, blah. And so if something's emerging from somewhere unexpected, it's easy to miss because we're just not talking to people who are familiar with that. My most recent book before this one was called The End of Competitive Advantage, and the concept behind The End of Competitive Advantage was that instead of really being able to think about competitive advantages as lasting for longer periods of time, in today's environment, especially with digitization accelerating everything, we're dealing with life cycles. So you have a period of time when an advantage is created. It comes into the world. We see, you know, whether it's going to make it or not. Then it scales. Then you can enjoy it for a while. But then, you know, it comes under pressure. Customers get bored. Competitors catch up. Your ability to protect it erodes. Your patent evaporates, whatever it is. And that advantage goes into decline. And so people were very excited by that idea. They thought, wow, this explains a lot that we hadn't really grappled with before and very useful, right? But one persistent question came up throughout the couple of years since that book was published, and it was, how do I know when? Like, how do I know when I'm going into growth? How do I know when I'm going into decline? How do I know when things are about to happen? And that got me back to Andy Grove thinking about, well, how do we know when strategic inflection points are going to be upon us. So one of the early warnings, to me, of an advantage fading is that you start losing good people or you can't recruit the people that you would like. Or the people that you have aren't actually being recruited by other people. That tells you something.

So when you fail to adapt, what'll happen is you'll start to see-- the earliest signs are the people who are your researchers, your scientists, your whatever. They kind of look at their book of what they're doing. And what motivates those kind of people is they want to work on what's next, the cutting edge. If they feel they're just retreading the same old boring territory, they're going to go somewhere where they can work on what's next. So the first people to go will be people like that. Now the reason that's kind of interesting is that those are not people who sit regularly in the C-suite those are probably not even people the C-suite people are regularly talking to. But their immigration, their departures, send a very strong signal that if we're not exploring the next thing, we're going to be basically regurgitating what we've already done 1,000 times. So the next group of people that will leave are the people who are in sales, right? The more aggressive of them are going to get frustrated by the fact that their customers are saying, well, wait a minute. Why don't you have 'x'? Why don't you have 'y'? I can get it from so-and-so, and it's cheaper and it's better and it's easier. White why should I do business with you/ And so they'll start to-- the better of them start to go as well. And you're going to find it harder and harder to recruit. So if people see you as being stuck in the past, they will not hitch their careers to your trajectory. 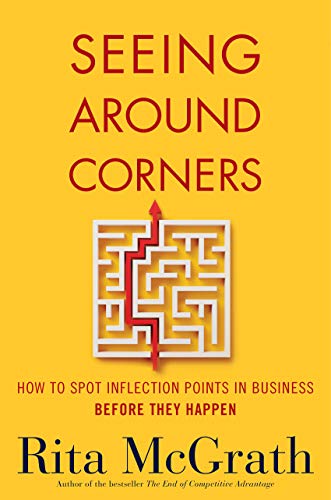