Academy Award nominee Stanley Tucci has appeared in over 90 films and countless television shows. He has performed in more than a dozen plays, on and off Broadway, and has[…]
Go to Profile 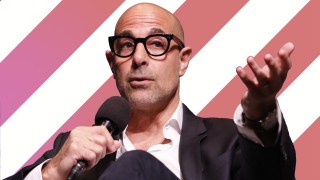 How to make a great film the Stanley Tucci way

Want a crash-course in filmmaking from by three-time Emmy winner, two-time Golden Globe winner, and Oscar nominee Stanley Tucci? You got it.
▸
7 min
—
with
Stanley Tucci

“The most crucial part of filmmaking is that it’s a collaboration,” says Stanley Tucci, as he opens the door on this seven-minute crash course on what it takes to make a great film. Tucci is a lauded character actor, three-time Emmy winner, two-time Golden Globe winner, and Oscar nominee who has appeared in films such as The Hunger Games, The Lovely Bones, and Spotlight. Tucci also has a life behind the camera, where he has most recently written and directed Final Portrait (2018) starring Geoffrey Rush and Armie Hammer. In this behind-the-scenes look at filmmaking, Tucci lets us in on the dynamics of creative partnerships, how restrictions fuel imagination, and why you should try to yell “Cut!” as little as you possibly can. So without further ado, here’s how to make a great film, the Stanley Tucci way.

Stanley Tucci: The most crucial part of filmmaking is that it's a collaboration and the actors and the director and the designers, and the DOP, everybody has to be on the same page and they have to be able to communicate. They have to be able to give feedback to one another, accept that feedback, throw out more feedback so on and so forth. It has to be a give and take.

You have to be prepared, whenever you're going to make a movie, to just throw anything and everything out of the window at any point during that process. That's your primary—not obligation, but it's of absolute necessity that you be prepared to do that as a filmmaker. Don't be precious. And during that process, you find that the thing that you're trying to create is always changing, it's always in flux and that, ultimately, it really is never really finished.

I'm also a big fan of not cutting—unless I really feel it's necessary—and forging ahead and having somebody repeat lines. I'll say, "Okay now go back to the beginning of that monologue and just do it again. Do it again and just do the whole thing with your eyes closed," or whatever. Just to keep the camera rolling, otherwise what happens is people start to think too much and thought can be the absolute death of creativity and then everybody else on the set starts doing this: they start grabbing their thing and they start adjusting it and the guy comes over with the makeup and the thing comes in with the hair and blah, blah, blah and that's ten minutes and all the energy is gone, and that actor's concentration is gone, and we've lost time.

You hope for a certain budget, you usually don't get it. You get maybe close to it, but you know what your bottom line is. You know, like, okay I can make his movie for blah, blah, blah. I really can't make it for less than that because then it just becomes—it won't look good, it just won't work. So you have to know what your bottom line is and that's basically what you usually end up with on a movie like this. Once you have that you have to stick to it, and I'm very happy to overspend my own money, but I'm not interested in overspending somebody else's money. I'm only interested in coming in under- or on-budget. And I rather like those restraints because throwing money at a problem doesn't always solve that problem, as is evidenced in so many bigger films. The idea of restraints, constrictions, restrictions—they only engender creativity, as far as I'm concerned. And again, if you have the right team who go, 'I know what to do, I know what to do. Just give me that pillar that we used for the set on blah, blah, blah, we'll take it, paint it green, stick it over here and put the bush in front of it and nobody will ever know.' And this is what's done—and people don't know; I mean, if you have really good people they don't know, if you have really bad people you can sort of go, 'Oh that's at same pillar painted green with a bush in front of it.' But I think it's really just all about imagination. It's about imagination and creativity.

Finding somebody with whom to collaborate sometimes is necessary; sometimes you don't need it. Sometimes you think you need it but you don't need it, which is why you see, a lot of times, people will sort of pair up and they do a couple of projects and they end up going their separate ways. Because they took something that they needed from each other at that time, and then once they sort of got it they could go their own ways. I think if you look at the example of Picasso: Picasso was like a thief, like a sponge, like a thief who was a sponge, like a sponge-thief. Does that make any sense? If you look at his trajectory, he sort of aligned himself with Juan Gris, who was the great cubist; Julio Gonzalez, Gonzalez was a great sculptor; he befriended all of these people and sort of took from them what he needed in order to do what he wanted to do and learn from them and then go from there. That's part of what you do when you're younger. But sometimes if you just take a beat you may realize that you don't really need that. It's very rare to find a collaboration that lasts for longer than a couple or three projects, I think. It's very unusual. But I think you're looking for somebody always who is going to not just be a yes-man, but somebody who is going to challenge you, who shares an aesthetic, but who is really going to challenge you, who is really going to question you, who is really going to say, "Why is that line necessary? Why do you want that shot in there? What does that shot mean?" And you have to be able to do that to that person too.

And I think every artist goes through—and it's part of it this film, Final Portrait, where Giacometti is incredibly self-doubting and self-effacing and self-loathing, even. I think that we all have that and then we have these moments of, 'Oh I really am good at what I do. I really do know what I'm doing. I really am okay and I'm good at this.' And then you have those moments where you go, 'I have no idea what I'm doing, why have I ever chosen this profession?' It's simply a matter of—I don't know that you can ever get to the point where you can balance it out, but having a good support system and taking a deep breath and maybe looking back on what you have achieved without resting on laurels is not a terrible idea sometimes.