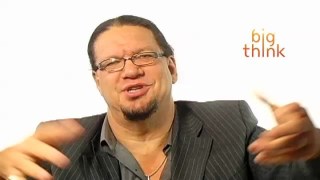 How Penn Jillette Prepares for a Show

“Same way Kennedy prepared for his debates: with a blow job and a cup of coffee,” jokes the magician.

Question: How do you prepare before a show?

Pennrn Jillette: Same way Kennedy prepared for his debates: with a blow rnjob and a cup of coffee. No. Teller and I have done so many shows, we rnwere figuring the other day that - I think it's possible Teller and I rncertainly together, we've done more shows together on stage—more hours rnof shows on stage—than I believe anyone alive. I think if we keep going rnanother 10 or 20 years, which we certainly hope to, it will be more thanrn anyone ever has.

Wern would be backstage off-Broadway—we shared a backstage area with he rngentleman who were doing the Steppenwolf Show, you know, and wonderful, rnwonderful actors. I mean, fabulous actors. Tremendous. I mean, much rnbetter actors than us. I mean, we're not even actors. We shared the rnbackstage area, and the great thing was that they would be there 45 rnminutes before the show meditating and going, you know, "Red, leather, rnyellow leather, red leather, yellow leather," and working with their rnwhole instrument, you know, everything prepared. And Teller and I would rnbe just finishing up tying our ties, while reading, and walk on stage rndirectly in the middle of a conversation we'd be having about a movie wern saw on TV last night. No preparation whatsoever and it's just rnbecause... well I like to think it's just because we had done so many rnmore shows than they had.  But you might also think it's because they'rern better than we are. I think either answer could be... you could make anrn argument for.

Camera Tricks Are Not Magic