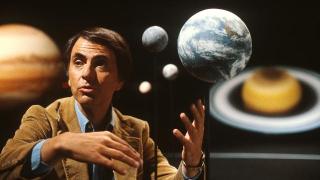 When Bill Nye was studying engineering at Cornell University, he took astronomy under none other than Carl Sagan. In the past, Nye has said that Sagan gave his lectures just as he presented the iconic television series Cosmos, and as an aspiring science educator himself, Nye was hugely inspired. So what are his fondest memories of the legendary cosmologist? There are two: one is Nye’s favorite — where he convinced Sagan to make a monumental music choice regarding the 1977 Voyager golden record — and the other is his most important, when Sagan put him on the path to success with advice that formed the core of the Bill Nye the Science Guy show.

Wesley: Hello Bill Nye the science guy. I am a guy, a YouTuber named Wesley and I wanted to ask you,since Carl Sagan was your mentor if I’m not mistaken, what is your fondest memory with your mentor, Carl Sagan? Take care and have a good day.

Bill Nye: So, my fondest memory with Carl Sagan—the fondest might be different from the most important. The fondest memory is: we were in class in the spring of 1977, just a few months before the Voyager spacecrafts were launched in August of that year. And these are the spacecrafts that have the golden disk, the record, phonograph record mounted on the side of them with the presumption that an alien civilization will find this, decode the resonance of the hydrogen atom binary symbology and figure out how to play a phonograph record from Earth at the right speed. It’s an extraordinary idea but it was cool. It was inspirational. It brought out the best in a lot of us. And Carl Sagan said, “What rock and roll song should we put on?” And he said, “We’re considering Roll Over Beethoven by Chuck Berry. And everybody said “No, Professor Sagan, no, not ‘Roll Over’. It’s a fine song but the song you want is Johnny B. Goode. Johnny B. Goode by Chuck Berry.” And so that is the song that is on the record, and that is a fond memory.

I may have led the charge, but I was in – my older sister listened to that music. She was from that time, of doo-wop and the beginnings of rock and roll. So I was very familiar with Chuck Berry and I thought “That’s great.” And so he changed it. Chuck Berry, Johnny B. Goode is the one that’s flying out into space on two spacecraft.

Than the most important memory I had with Carl Sagan, there’s no question—it was ten years later. I went to my college reunion in 1987 and I arranged with Carl Sagan’s assistant to spend about five minutes with him, maybe it was ten minutes which was a big – he was a superstar by then. He had done Cosmos. He was being asked to speak all the time. He had written these great books, award-winning books. And I asked him, I wanted to do this kids’ show about science, “What should I do? I’ve been doing demonstrations about bridges—“ and he says, “No, no, no. Don’t do engineering. Do science.” And then he said, “Kids resonate to pure science.” That was the verb he used – resonate. And that really stuck with me.

So if you ever watch the old Bill Nye The Science Guy shows we did our best to use, to show you pure science rather than technology. And the show we did about computers (which is nominally a show about technology) I did my best to focus on the big ideas: switches and binary and commands that take place without a human having to sit there and tap the button.

So that meeting with Carl Sagan in the end of May 1987 changed my life.

So the fondest memory was Johnny B. Goode. The most important one was resonate to science.