These three tactics will help you focus on the task at hand.

Nir Eyal
A graduate and instructor in Stanford’s Graduate School of Business, Nir Eyal has studied and taught behavioral design to industry-leading experts and scientists. He writes about the intersection of psychology, technology, and business at NirAndFar.com and his writing has been featured in Harvard Business Review, Time, Inc., and Psychology Today.
10 March, 2020

NIR EYAL: I took the advice of every other expert and book out there about managing distraction and focus and I got rid of all my technology. I did a digital detox. I got myself a flip phone and I bought myself a word processor off eBay from the 1990s. And I thought getting rid of all the technology would solve the problem. But, of course, it didn't. I'd sit down at my desk and I'd start working away on that word processor and realize oh, you know, there's that book I've been meaning to read or let me just tidy up my desk real quick. Or the trash should be taken out right now. And I kept getting distracted because I hadn't learned tactics and techniques to cope with my internal triggers in a healthier manner.

The first is to reimagine the trigger itself. If we can change our perception of that uncomfortable emotional state and explore that sensation with curiosity rather than contempt that has been shown to be a much healthier way to move us toward traction as opposed to distraction.

The second technique is to reimagine the task itself. It turns out that people find ways to enjoy all sorts of tasks that other people find horribly boring and unfun. Well, it turns out that researchers tell us that we can actually learn to "play anything." That if we change how we imagine the task itself we can actually find that there can be fun in the task. Now this isn't in the Mary Poppins way of putting a spoonful of sugar. It turns out that that actually doesn't work. In fact, what we want to do instead is to focus more intently on the task while looking for the variability within it.

Finally, the last thing we can do is to reimagine our temperament. One of the most prevalent bits of folk psychology is this idea that willpower is depletable. That you run out of it like gas in a gas tank. And there actually was some research a few years ago that found that this did occur. But when other researchers wanted to replicate these studies they found that for the vast majority of people they did not experience what's called ego depletion, this idea that willpower runs out. Except for one group of people. According to Carol Dweck at Stanford University, ego depletion was found only in people who believed in the phenomenon. So if you are the kind of person who believed that your willpower runs out, that you're spent at the end of the day – and if you are anything like I used to be I'd sit down on the couch and I'd say ah, how can I possibly resist any more temptations and I'd watch Netflix and have a pint of Ben & Jerry's ice cream to reward myself because I had spent all my willpower.

Well it turns out that was a self-limiting belief that I had told myself about my temperament. So what we need to do is to reimagine our temperament, particularly this pernicious belief that technology is addicting all of us, that it's hijacking our brains. That is scientific rubbish. It is not true. And, in fact, when we tell people this myth that it's addicting everyone, it's hijacking our brains that there's nothing we can do about it, guess what? It becomes true. This is called learned helplessness. When people believe there's nothing they can do about the big bad algorithms and the corporations taking over their brains they stop trying. And so, of course, it becomes the case that when they feel they can't do something about it they don't do anything about it.

So what I wanted to do with Indistractable was to show people that we are far more powerful than we know. That there are some simple things that we can do like mastering our internal triggers to control our attention and choose our life. 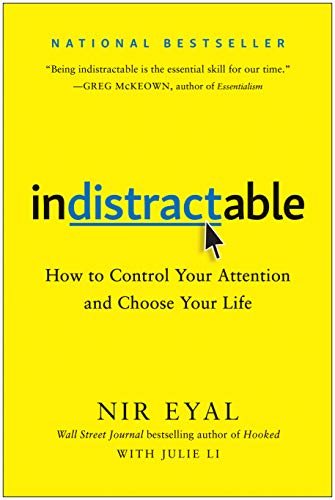