David Ho is the Scientific Director & CEO of the Aaron Diamond AIDS Research Center. Ho’s laboratory has focused on the pathogenesis of HIV infection. Most recently, his group has[…]
Go to Profile 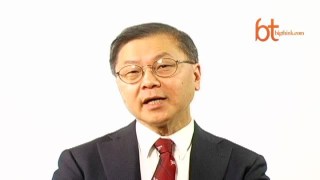 Time’s Man of the Year in 1996 discusses how his background in physics helped him develop the Highly Active Anti-Retroviral Treatment (HAART) that revolutionized AIDS treatment in the mid-1990s.

Question: How did your education prepare you for your eventual development of an HIV drug "cocktail?"

David Ho: In terms of the most important scientific discovery to come out of my group, there was a acute moment—a eureka moment, so to speak—and this was in 1994. By that time, my colleagues and I had been immersed in AIDS research already and we realized that, for any given patient with HIV infection, his or her viral load or the amount of virus in the blood tends to remain rather constant over time. We had been thinking about that, why does it remain constant? And gradually we realized that it was a what we call a dynamic equilibrium, that is the amount of the virus being made is approximately equal to the amount of virus being cleared, so it was a steady state. And then the eureka moment came when we had the opportunity to administer new drugs to HIV-infected people. And then, within weeks of doing so we collected the data and it showed that viral load actually dropped precipitously. And of course that is a great outcome for the patient and for the doctor, but the question that we posed was: "Why does it drop? And why does it drop in that acute manner?"

This is where my quantitative background in physics applied; we realized that we could actually write that out mathematically in a straightforward differential equation that an AP high school student would be able to do. And from there, fitting the data and doing the calculation we were able to come up with the idea. We were using the drugs to block virus infection and production and therefore the precipitous decline reflected the fact that the virus was constantly being cleared at a very rapid rate. So using that quantitative background we were able to calculate what the turnover of virus was all the time in a given infected person and that number turned out to be enormously large, so the virus was just replicating away at a rapid clip.

And from there we also knew that HIV changes every time it replicates, so high replication rate meant high error rate and therefore HIV was able to mutate very quickly. We could then do the additional calculation to show that if you treat this virus with one or two drugs at a time, the virus is predictably going to mutate and escape from the action of the drugs. But at the same time we could also calculate what it would take to corner the virus so it’s not able to escape. Those calculations suggested to us that three or more drugs would do the trick. So we knew that by 1995 and launched a series of experiments in patients using what is now called a cocktail therapy of three drugs or more. And immediately, within weeks, we saw the good result. But we wanted to wait to see if the results could be sustained and it was only by middle of 1996 we realized that we were able to keep the virus below detection level for a good year and that opened up the door for what is called combination therapy today.

You’re Not a Lesbian Until You Tell Your Mother