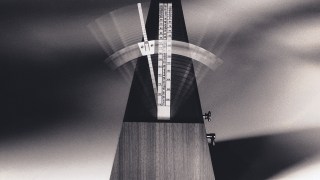 Daniel Dennett: How Life is Like a Game of Rock-Paper-Scissors

Philosopher Daniel Dennett dissects the strategies behind the game rock-paper-scissors and determines that randomness/indeterminacy is the optimal strategy. The best way to avoid being detected by your opponent is to rely on a random determination of which move to use. Some people have jumped to the conclusion that maintaining a sense of indeterminacy is optimal for living a life in which one is always in competition with outside forces. While perfect indeterminacy would be an asset for playing rock-paper-scissors, Dennett argues it’s not really that necessary in other most other aspects of life.

Daniel Dennett: I think everybody knows the game rock, paper or scissors.  Paper covers rock.  Rock breaks scissors.  Scissors cut paper.  We all learned to play this and what you want to do is be unpredictable to your opponent.  What's the best strategy?  Well, if you just don't want to lose, your best strategy is to play randomly because then there's no pattern in your moves so there's nothing to track.  There's no way for your opponent to track your moves.  It's very hard for human beings to play randomly, to do anything randomly.  We're not good at creating random series.  It's been studied carefully.
So if you really -- for instance, if you were obliged to play rock, paper and scissors for big bucks and you wanted to break even, here's the strategy you might well adopt.  Go to a table of random numbers and copy down a few hundred and trade the numbers in  for R, P and S -- rock, paper and scissors.  And memorize the list or keep the list in a secure place and then play according to that list.  That should pretty well guarantee that you're moves will have no pattern that will be detectable by your opponent as long as he can't see your list.  It's very important that you have to keep it secret.  Otherwise, of course, you're a sitting duck.
Now, I think that simple example exposes one of the seeds of the free will literature.  People sense in their bones -- and they don't quite know why that it's very important that their moves not be predictable in life.  They want a certain amount of unpredictability.  They don't want to be too predictable.  There's a very good reason for this.  There's a good game theoretically is why they want to preserve a certain amount of unpredictability.  Because if you're too predictable, especially if you're sort of hyper-rational and you're always doing -- making the best move all things considered.  If somebody else could figure out what those best rules are then they could take you for a ride.
Now I think here's what's happened.  People have recognized for thousands of years that an autonomous agent needs to preserve a certain amount of unpredictability in order to maintain autonomy.  And they've figured as philosophers and others often do, well, if unpredictability is good, perfect unpredictability is better.  And so they decided that they ought to be perfectly unpredictable.  They ought to be their choices ought to be purely undetermined -- a quantum undetermined.  So that, as Jerry Fodor once said, "Even God couldn't tell whether Eve would eat the apple or not."  Well, if you have to worry about God -- if you're playing rock, paper and scissors with God, then you should want quantum indeterminacy.  Because then even God can't read your list.
But for ordinary mortals, for the sorts of antagonists and interlockers we're apt to encounter in our lives, you don't need perfect unpredictability.  We just need good enough for government work unpredictability and we can have that without indeterminacy altogether.  In other words, there's no reason to hold out hope for indeterminism.  It is not a threat to free will in the important moral sense.  You can have all the free will you could ever reasonably want without indeterminacy.