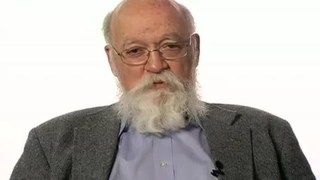 Daniel Dennett Explores the Problems of the Human Brain

Our brains are cunningly evolved, cunningly designed to make life easier for us.

Question: Do our brains play tricks on us?

Dennett:    Our brains are cunningly evolved, cunningly designed to make life easier for us.  And many ways that it makes life easier for us but one of them is that it gives us over simplified versions of what we’re doing.  This is a set of tricks which has been sort of reinvented by software engineers.  Your desktop is a very good case of it, we have this you know, little yellow files that can be move around with click and drag and things get put here and there and this is called the user illusion and it is illusory to some degree but of course it’s a very benign illusion, it’s really, really it’s the helpful way of organizing a lot of complexity.  We don’t need to know all those details.  We just need to know how to achieve certain effects and basically our brain does the same thing and has been doing it for you know, millennia and it’s got, it’s evolve some sort of internal sign posts that are good short hand for things that we can do.  Everywhere we look, there’s things we can do we don’t know how we do them.  Where completely cut off from the process if I say you know, give me the first line of limerick make up the first line of limerick well you know, give me a few seconds you’ll come up with 2 or 3.  How did you do that?  You don’t know.  The words just come sort of bubbling up and you don’t have any insight into the sort of subterranean unconscious process that generates that particular thing.  You may have a little insight but not much.   And it’s there is a very sharp limit to the depth that we as conscious agents can probe our own activities and this, this sort of superficial access that we have to what’s going on, that’s what consciousness is.  Now, when I say who is this “we” whose got this access that’s itself part of the illusion because there isn’t a sort of vast part of the brain that’s sitting there with this limited access that itself is part of the illusion what it is, there’s a bunch of different subsystems which have varying access to varying things and that conspire in a sort of competitive way to execute whatever project it is that their, in their sort of mindless way executing.