Climate change: Why we need 70% of U.S. politicians to unite

Paying a fee for greenhouse gas emissions may spur a revolution, in terms of corporate behavior, amid the climate crisis.

DAN ESTY: So when I served at the U.S. Environmental Protection Agency in the late 1980s and early 1990s climate change first came onto the public agenda in a big way, and there was at the time a UN process launched to think about this issue. There was, in fact, the inner governmental panel on climate change that was chartered to go out and look at the science and provide a foundation for diplomats getting together and to fashion a global response to what was already understood to be a risk that the planet was warming and that we were going to see things like sea level rise, changed rainfall patterns, more droughts, more floods and frankly a whole series of risks including hurricanes and more intense and frequent windstorms that began to really get people worried. So there was a sense that there was a big issue there.

I worked at that time as part of the EPA team that negotiated the 1992 framework convention on climate change. And what was interesting at that moment is how it brought people together across party lines. So democrats and republicans thought this was an important issue. And when that treaty was finally concluded in the spring of 1992 and later presented to the United States Senate for ratification which, of course, requires a two-thirds vote seemingly unimaginable in today's politics. The end result was the senate passed the treaty by voice vote effectively unanimously. So not only the democrats but all the republicans said this is an issue we need to move forward on and together we advanced that agenda.

But by the mid-1990s there was a political divide and it became a partisan issue. In fact, worse than that it became a wedge issue which the republicans uses in one respect to enliven their base. The democrats pushed in another direction and the two parties saw no value in coming together. So I think we really have a serious problem on our hands where this is a partisan issue because frankly the climate change problem in particular, but he need to move to a sustainable future more broadly cannot be done on a one party basis. Transformative change of the kind that's required here, relaying the energy foundation of our economy and our society can only be done when you come up the middle with about 70 percent of the public and the political sphere moving together.

And that is by definition not going to happen on a one party basis. So I think there's now an urgent need and the Better Planet book I think represents a response to think about what's the up the middle strategy, what are the technologies, what are the approaches, what are the ideas that might allow us to come together and move towards this sustainable future.

Looking out towards 2021 and beyond I think you're going to see the republican party in the United States reposition itself on climate change. I'm already hearing from a number of republicans who believe that they need to have a serious and thoughtful approach to the issue. The big divide which has often been framed around the science with one side being called science deniers actually hasn't really been about the science. The science is an excuse particularly for some republicans who fear the implications of the science for policy. And they're afraid that if there is a real problem here the democrat's answer and particularly the environmental communities long time answer which I think of as a twentieth century approach is a lot of government mandates. Sort of a command and control strategy that will limit people's choice and perhaps slow the economy, and I think what you're seeing now is a recognition that the problem is real and that's going to be increasingly accepted across party lines.

But that what's really required is a thoughtful new and serious approach to policy. Almost certainly a portfolio approach with a number of different strategies woven together. Some price signal. We're going to have to make people pay for the harm they're causing which I think should be done with a slowly escalating carbon charge starting at $5 per ton and going up by $5 per ton per year for 20 years so that at the end of a 20 year timeframe you'd have $100 a ton price on greenhouse gas emissions. And that would immediately change behavior not just at year 20 but in year one because people see that rising price and whether they're building a power plant or building a building or even buying a car they'll start to think about what it means to have to pay that charge for their greenhouse gas emissions. They'll change behavior and it will spur innovation. So I think there's actually a lot happening that we can be quite excited about and I do see the parties coming together and prospects for progress emerging out over the next several years. 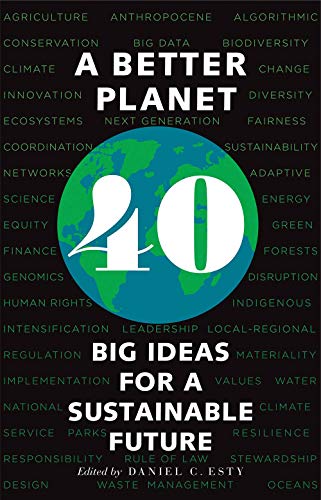 Researchers observed "inter-brain coherence" (IBC) — a synchronisation in brain activity — between a musician and the audience.

Emma Young
Photo by chuttersnap on Unsplash
Mind & Brain
When a musician is playing a piece, and the audience is enjoying it, they can develop physical synchronies. Both might tap their feet, sway their bodies, or clap their hands.
Keep reading Show less
music brain psychology emotion science and art neuroscience