Brian Greene is an American theoretical physicist and string theorist. He has been a professor at Columbia University since 1996 and chairman of the World Science Festival since co-founding it in 2008. Greene has worked on mirror symmetry, relating two different Calabi–Yau[…]
Go to Profile 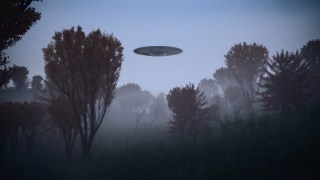 Is there intelligent life out there in the universe? Theoretical physicist Brian Greene explains why that's a more complicated question that it appears.
▸
2 min
—
with
Brian Greene

Is there intelligent life out there in the universe? That question is more complicated than you might imagine. What constitutes intelligent life? How does it come to be? How many totally random happenstances occurred just so we could exist, and could those happenstances occur again elsewhere out there? Why, as Fermi so astutely asked, haven’t intelligent beings communicated with us yet? Theoretical physicist Brian Greene, a Columbia University professor and chairman of the World Science Festival, shoots from the hip and says, “Yeah, I think there’s probably alien life out there. Probably intelligent life too.”

Brian Greene: I think there’s a — of course a chance that there are aliens out there in space. I mean, no one knows the answer to that and no one has any particular expertise. So anyone who answers a question on alien life, they’re just talking from their hunch, from their gut. So here’s my hunch, my gut. Well, like most people, I look out on a dark night and I see all of the stars out there and then I know about all the galaxies out there, you know. Hundreds of billions of stars per galaxy. Hundreds of billions of galaxies. Now we know that many of those stars have planetary systems and it can’t help but just have a sense of — with all of that out there, there’s got to be other life that somehow is populating some of those planets. But the big question to me is not so much whether there’s other life out there. Is there intelligent life out there? Now look, some will say that we don’t have a single example of intelligent life in the universe, right. But putting that to the side what I mean is — and what many scientists mean is, is there life out there that can build radio telescopes that could possibly communicate with us.

Because if there is life out there and we can’t ever communicate, it’s hard to see how that’s going to have much of an impact on us, on life as we know it. I mean the big, the radical break from the past will be when we can actually communicate with life out there. And I don’t think we know enough about what it takes for alien life to become intelligent in the sense of building radio telescopes to have any sense if it’s likely or unlikely, you know. Is it some strange coincidence of having, you know, big planets nearby like Jupiter that helped deflect asteroids that allow enough time for life on this planet to have gotten to the point; are there other contingencies that we don’t know about that are so rare that maybe intelligent life happens only here? We don’t know. But shooting from the hip, speaking from the gut, yeah I think there’s probably alien life out there, probably intelligent life too.

Hey Bill Nye! What’s Science Good for Outside of School?