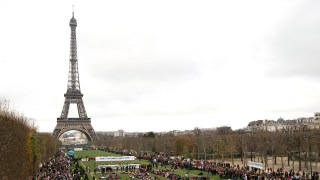 The world was able to completely revolutionize warfare between the start of World War I and World War II. Who's to say we can't replicate that sort of rapid change over the next 20 years, except with a goal of improving the environment?
▸
6 min
—
with
Bill Nye, The Science Guy

The world was able to completely revolutionize warfare between the start of World War I and World War II. Who’s to say we can’t replicate that sort of rapid change over the next 20 years, except with a goal of improving the environment?

Bill Nye: My grandfather went into World War I on a horse, on a horse. I don't know if you've ever ridden a horse, but if people are shooting at you, it's just not the best place to be. You're high off the ground; they shoot the horse and you're now immobile and you may end up underneath the horse and it's all very bad in that regard. Twenty years later, when both of my parents got involved in World War II, nobody who was fighting a war did it on a horse. Everything changed in transportation in just 20 years, so let's do it again. Let's make all-electric cars. Let's make all the electricity from wind and solar.

Just that world leaders all showed up in Paris this year is a fantastic thing. Furthermore, the United States president showed up there. The president, whether you like him or not, is the most influential single guy in the world, single person in the world and he went to the trouble to go there, committing the United States to reducing greenhouse gas emissions over the next few years. And they all agreed to get together every five years and check on each other, see if the other countries are holding to their commitments. Now the trouble is if a country is making more carbon dioxide than they agreed to in 2015, than it agreed to in 2015, there's not too much anybody can do about it, except world opinion is very important. World leaders are very interested in what people think of them and us — or their country.

The biggest news in science this year for me was the U.S. — which is the world leader in all this energy burning, fossil fuel burning, and using a lot of energy per person — the U.S. now has 53 percent of our population who believe that humans are causing climate change. So 53 percent is enough to get elected president. And so maybe climate change will be an issue in the next presidential election here in the United States and that will influence the whole world.

A few weeks ago I was in West Virginia and I got an email from somebody in the Speakers Organization, the organization that led to my being hired to speak there, The Clay Center in Charleston, West Virginia, here in the United States. And it said don't talk about coal; it's a very sensitive subject here. The president's policies have greatly affected the coal industry and so on and so on. When you're in that part of the world, they have a technology called mountaintop removal. So they take off the tops of these very high hills, these mountains, and there's the coal all at this level all over the state of West Virginia and it ruins the local ecosystems. The streams get full of all this crud. They use these slurries to pump powdered coal around, use explosives and they destroy the forest that was there.

So when I did this talk, despite this warning from somebody, I got a standing ovation when I came out onstage. I did a talk, which wasn't bad; I got a standing ovation after that. Then there was a question and answer session like this, and I got a standing ovation after that. Now it ain't about me; all I'm saying is people in West Virginia are also kind of tired of the coal industry. There's 30,000 coal jobs in West Virginia. That's a lot. Or is it? If you go to a typical professional baseball game there are about twice that many people. If you go to a professional football game there are way more than twice that many people. So it's a lot of jobs, but it's not that many jobs. And if the state of West Virginia or the Commonwealth of the West Virginia were to change from coal burning to wind energy and solar voltaics, photovoltaics, soaking up sunlight to make electricity or even some concentrated solar where you concentrate sunlight and make heat, they would have 50,000 jobs over at least the next 20 years.

We cannot continue to burn coal, everybody. I mean this is noncontroversial except here and there. But what I'm saying is I was warned against talking about coal, but I talked about coal and people responded very favorably to not burning any more coal. So I think there's a little bit of a disconnect there in the politics.

Many of the citizens would rather not be decapitating their mountains and destroying their streams; instead would like to exploit the wind that blows through. There's another, by the way another charming thing. Because the mountains are the way they are in that area, it concentrates the wind in a few places. So West Virginia would have a slight advantage over nearby counties for certain wind applications. So you guys, just be open-minded. Anyway, if we work together, we can change the world. The Paris Conference was a big start, a big step. People will be talking about the Paris Conference for decades because I really believe it's a turning point.

My Intern, 50 Cent: A Lesson in Loyalty