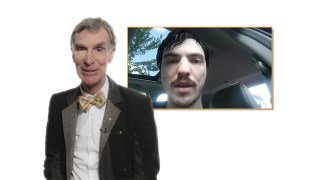 Hey Bill Nye! Is It Possible to Ask Too Many Questions?

When Mike asks Bill Nye the Science Guy if asking too many questions is really a thing, Nye responds with a surprising answer.
▸
2 min
—
with
Bill Nye, The Science Guy

“Hypothetically,” says Bill Nye, “you cannot ask too many questions. You cannot investigate too thoroughly.” But the world is not a hypothetical place; it is a real place with real people trying to solve real problems. Prolonged interrogation is a part of that formula, but it cannot be the only part. Nye says that in the social realm, tasks like sewing on a button do not deserve complex philosophical speculation — at least to the person trying to sew the button they don’t! The Science Guy supplies a complex answer given his own penchant for scientific investigation, but it’s a wonderful reminder of the context in which science occurs, i.e., a very human context.

Mike: Hi Bill. My name is Mike and I get told a lot that I ask too many questions. So my question to you is what do you think would be different if we as a culture were more encouraging of asking questions and being inquisitive and trying to learn, trying to understand things, especially with kids?

Bill Nye: This is a great question. Can you ask too many questions? I mean, hypothetically, you cannot ask too many questions. You cannot investigate too thoroughly. Could you possibly? However, what your friends may be responding to is something a little different. If somebody is trying to execute a task, let's say sew on a button, and you ask this person, "Why are you sewing on a button? Why are you using thread to sew on a button? Why are you using a needle and thread to sew on a button?" The person would think that you're not paying attention. This is possible that you're not thinking for yourself, that you're not using your own common sense. I'm not saying that's what's happening, but you reported at the top of your little segment here that people say you ask to many questions. I don't know. In other words, it could be a social-interaction thing. If you were sewing on a button, in general you're doing it because the button fell off or the button was never put on the piece of clothing in the first place and you're using a needle and thread because that is our current button-attaching technology. There are other technologies. Little plastic strings but they're not nearly as aesthetically pleasing as thread. I mention this only by way of example. Along this line if you — I'm in New York right now and it's the holiday season and on a very famous department store, it says, "Believe in the holiday season. Wouldn't it be better or how would it be different if it said, "Question"? That's a good question, man of questions, but be aware of your surroundings. Be aware of social interactions. Don't annoy people. Carry on.

How-To Guide on Mindfulness Meditation from a Stanford Neurosurgeon