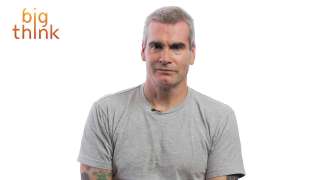 Back to School with Punkle Henry (Rollins)

The legendary punk rocker offers some advice to today’s youth.

Henry Rollins: Young person, you’ll find in your life that sometimes your great ambitions will be momentarily stymied, thwarted, marginalized by those who were perhaps luckier, come from money, where more doors opened, where college was a given--it was not a student loan; it was something that Dad paid for--to where an ease and confidence in life was almost a birthright, where for you it was a very hard climb.

You cannot let these people make you feel that you have in any way been dwarfed or out-classed.  You must really go for your own and realize how short life is.  You got what you got, so you have to make the most of it.  You really can’t spend a whole lot of time worrying about his.  You really have to go for your own.  If you have an idea of what you want to do in your future, you must go at it with almost monastic obsession, be it music, the ballet or just a basic degree.  You have to go at it single-mindedly and let nothing get in your way.  You’re young.  That’s why you can survive on no sleep, Top Ramen noodles and dental floss and still look good.

All the people you admire, from Mohamed Ali to any politician, they work and work and work.  Your president right now is a man who got where he is through very hard work and scholarships, mainly hard work and application and discipline.  If these people can do it, why not you?

We live in very interesting times and, as a young person going into a very turbulent and fragile economy that is going to get better--it’s going to take awhile--, it is easy to lose your moral compass, your decency, your sense of civility and your sense of community.  Very easy.  You known, things in traffic make you mad.  People are getting a little desperate.  They might not show their best elements to you.  You must never lower yourself to being a person you don’t like.

Weakness is what brings ignorance, cheapness, racism, homophobia, desperation, cruelty, brutality, all these things that will keep a society chained to the ground, one foot nailed to the floor.  It’s by being strong in the face of all of that, not lowering yourself to it, that’s how you lead.  That’s how you liberate others and maintain freedom.  You don’t have to beat your chest.  You don’t have to wave a flag, but to maintain a high level of decency

And it sounds like I'm a cranky old man, like something you want to rebel against, but really think about what I'm saying.  I think I'm right about this.  When you look at what real desperation and ignorance looks like, when you have to run from it, like, literally run from it, you don’t want to be that.  You want to be that which leads others out of that.

How to Stay in Office: Select Your Voters