The U.S. has been steadily losing its religion for decades. For the most part, Protestants have been leaving the church while the affiliation rates among Catholicism and other religions in the country have remained stable. But since 1990, Americans have been abandoning both belief and religious affiliation at such a fast pace that, by 2035, it’s likely that 35 percent of the population will have no religious affiliation — outnumbering protestants.

In an article posted on his blog, Allen Downey, a professor of computer science at Olin College, used historical data from the General Social Survey (GSS) to generate predictions about the future of religious belief in the U.S., each with a 90 percent confidence interval.

“According to the Theory of Secularization, as societies become more modern, they become less religious. Aspects of secularization include decreasing participation in organized religion, loss of religious belief, and declining respect for religious authority.

Until recently the United States has been a nearly unique counterexample, so I would be a fool to join the line of researchers who have predicted the demise of religion in America. Nevertheless, I predict that secularization in the U.S. will accelerate in the next 20 years.” 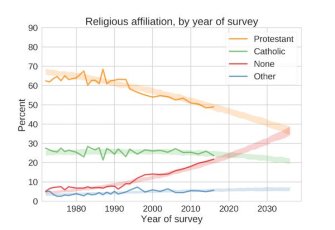 The graph above was generated using data from the GSS question that reads: “What is your religious preference: is it Protestant, Catholic, Jewish, some other religion, or no religion?”

Downey summarized his findings on religious affiliation in the U.S.:

The fraction of people with no religious affiliation has increased from less than 10% in the 1990s to more than 20% now. This increase will accelerate, overtaking Catholicism in the next few years, and probably replacing Protestantism as the largest religious affiliation within 20 years.
Protestantism has been in decline since the 1980s.  Its population share dropped below 50% in 2012, and will fall below 40% within 20 years.
Catholicism peaked in the 1980s and will decline slowly over the next 20 years, from 24% to 20%.
The share of other religions increased from 4% in the 1970s to 6% now, but will be essentially unchanged in the next 20 years.

In addition to religious affiliation, Americans also seem to be losing their religious belief — at least strong belief, as Downey’s model shows. 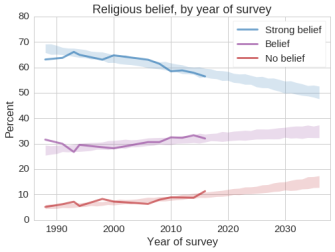 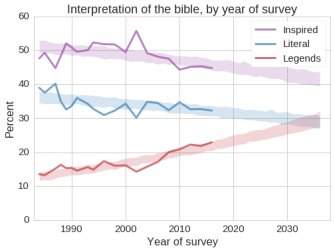 …as well as their confidence in religious institutions. 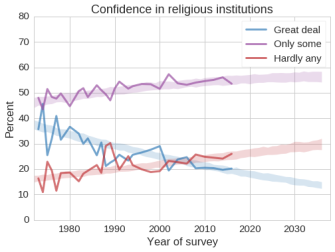 Startling as the numbers may be, there’s reason to think these projections are actually conservative, considering:

Although religion seems to be dying out in the U.S., other forms of spirituality might be just as present as ever.

In hell, we assume a position of moral superiority, looking down over the sinners and the poor decisions that led them to this wretched place. In heaven, Dante is looking down upon us.
13.8

It's better to pursue moral actions instead of the ephemeral state of happiness, according to the philosopher Immanuel Kant.
High Culture

Extreme asceticism: the Jains who starve themselves to death

Jains believe that karma weighs the soul down. This can be overcome through extreme asceticism, in which one slowly withdraws from life.
Up Next
The Present

Would the World Be More Peaceful If There Were More Women Leaders?

Men are barbarians, while women are civilizing. Or at least, that's how the stereotype goes.