I recently heard about a project put together by a student at MIT where an A.I. was built on the back of stand-up comedian transcripts in order to see if it could determine what was and wasn’t funny based on what it heard from the everyday public. Not too long after I heard about the project — dubbed The Laughing Room — I found and decided to visit the project in person hoping to get a sense of what it was like and to see what role I could play in getting the machine to laugh.

The Laughing Room was a project put together by Jonny Sun and Hannah Davis that was tucked into the corner of the Cambridge Public Library in Cambridge, Massachusetts. Minus the laptops, the camera, the audio output and the recording equipment, the room was set up to resemble a sitcom-like living room: there was a couch, two adjoining chairs, and books related to comedy left all over the table. The glass wall ensured that the room was well lit.

I came into the room late, and you can watch my brief appearance on the seven-hour live stream above. (I come in around 3:01:44.) Four other people were already there. There were three young students who knew each other on the couch and an elderly woman sitting on the chair across from me. She was in the middle of running through a few personal tests of the machine of her own: what she saw on a sweater (the machine didn’t laugh), an infamous comic from XKCD (the machine didn’t laugh), and a single line — “It gives me the hydrostatics to such a degree” — from an eighteenth century comic play (which the machine loved.)

Using the last point as a prompt, I turned in the general direction of the camera and — levying the falling point of a finger — said, “All right. Next up: The IcemanCometh. Go.”

The group and the two people monitoring the equipment laughed. A pause.

I abandoned the beat almost immediately, sailing away from the awkward and exploitable silence with a quick, “No?” 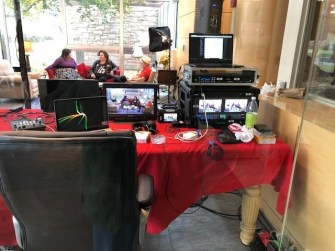 The creative part of my brain immediately assigned a motive of suspicion to the machine. (A motive that could well have been warranted if we’re to factor in what others have been tweeting about their experience. (This also led me to jokingly reference Black Mirror but Hannah — who was in the room — politely pushed back when kiddingly asked about it, saying that we were ‘nowhere near’ that particular dystopian reality.))

What was ultimately learned? It’s early days (very early days) — Jonny Sun tweeted that he was interested in taking The Laughing Room to other museum and libraries and for the project to live on — but there is a list of what the machine deigned to be the funniest thing said over the course of the experience, with “fish” deemed to have the highest probability of being funny and “oh wow fruit” carrying with it the second highest probability of being funny.

On a personal level, I was struck by two things: one was the change in the dynamic between those seeking to produce laughter while knowing that the machine was responsible for conveying the laughter (at one point, one of the young women on the couch simply leaned into saying “Really?” to see if it would provoke a response, which it did.) The relationship in the room slowed down to something almost resembling a pause at some points because the five us were collectively toeing the line between actually speaking with each other and speaking in such a way to prompt laughter.

It brought to mind the experiment called “7 Minutes in Purgatory” (which I mistakenly upgraded to ‘Heaven’ when I mentioned it in the room), where comedians had to put headphones on and deliver their routine without the audio or visual feedback of an audience; the other thing that struck me during all this was the fact that the machine misheard some of what was said when we were in the room, meaning that it was reacting to us based on what it thought it heard.

The thread that runs through each of these reactions is the fact that comedy has within it the potential to offer up a quick and dexterous way to affirm mutual humanity through something that skirts up against the edge of — and can frequently often outright be — art. And it’s something that offers up immediate feedback.

The difference between the two reactions above was that — with one — one person still knew that their jokes were reaching an audience. The drama of the shift in the structure was that we were placing the comedian’s humor all the further away from us — and vice versa. The implicit tension in that — and the ways in which comedians succeeded and failed because of that — fueled part of the laughter. 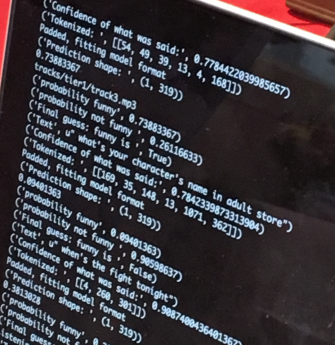 The A.I. determining whether or not what was said was funny.

The equation finds itself somewhat flipped in The Laughing Room: while everyone was being live streamed to an audience, there was no ‘someone’ being prompted to laughter. Going into that room was like trying to prompt the weather into raining — or, in this case, laughter. There is — and was — something cloud-like at work when one person tried to describe the fact that they were acting in a play that evening and the A.I. could only respond with waves of laughter that passed over our attempts to speak. You couldn’t ‘read’ someone the way a comedian ‘reads’ someone, which was interesting in and of itself, as people used to talk to a chat program ELIZA as if it were a real person when it would simply mirror text back to an individual in the form of a question.

However: if we were to take a neuroscience-like approach, we could perhaps reframe some of the above by pointing towards one hypothesis that was tested in 2017: “It has been proposed that endogenous opioid release after social laughter would provide a neurochemical pathway supporting long-term relationships in humans.”

I’d head back into The Laughing Room and put these questions to the A.I. itself, but — I have to confess — part of me is still worried that it would just respond with “oh wow fruit.”

From machines to animals, there are many kinds of possible minds.
Life

Learning another language might make you richer, sexier, and smarter. Why not try it?
High Culture

The so-called “court painter of Silicon Valley” was shaped by her youth in communist Poland but looks forward to a future ruled by celebrity robots.
Up Next
Neuropsych

How the brain switches between different sets of rules

When you slow down after exiting the highway, or hush your voice in the library, you’re using this brain mechanism.