The news that Donald Trump got sick with COVID-19 prompted “karma” to trend on social media. The President downplayed the virus, openly mocked the practice of wearing masks, shared misinformation, and held super spreader events for thousands of followers. But what happened to him was not necessarily karma (or at least, we can’t really know). Chances are, karma is not what you think it is.

Karma is not just a mechanism by which the universe brings snarky retribution for someone’s misdeeds. It’s not simple luck or even destiny. It’s a Sanskrit word that means “action,” “work,” or “deed,” and it really speaks of the spiritual cycle of cause and effect. The good intentions and deeds you perform result in an addition of good karma, while the bad ones add to the bad karma. Notice that karma doesn’t necessarily have to be negative. It’s more a law of consequences than a particular reward or punishment.

The notion is linked to the idea of samsara, which also originated in India and means “wandering.” It is paramount to Hinduism, Buddhism, Jainism, Sikhism, and Taoism, and refers to the belief that all living beings go through cycles of birth and rebirth, which may continue indefinitely. With the details depending on the religion, the kind of karma you accumulate on the wheel of life or “karmic cycle” can influence both the future of your present life, but also the one you may have coming up. The soul transmigrates after death, bringing Karmic impulses from the life just finished into the new one. Conversely, it’s important to note that karma you are experiencing today may be a product of not just your actions in this lifetime but based on what happened in the lives you had in the past.

If you’re wondering, being reborn as an animal is looked at as an undesirable rebirth, leading to much additional suffering. Having a human rebirth would land you closer to being able to get off the karmic soul train.

How do you escape samsara? By working towards achieving enlightenment, or “Nirvana.” Once you get there through good karmic deeds and spiritual practices, your desires and sufferings will go away and you will find peace and happiness. Of course, your physical body will die and you will no longer be reborn, but on the plus side, you will be awake to the true nature of reality and if you’re Hindu, you’d reunite with Brahman, the universal God or soul. 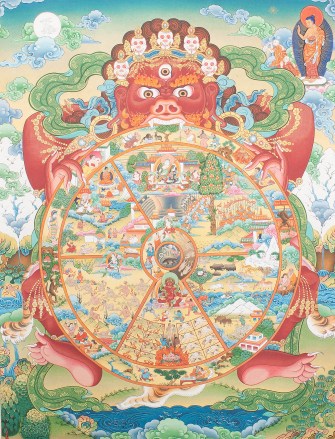 7th-century Upanishads described the law of karma causality in this poetic way:

Now as a man is like this or like that,
according as he acts and according as he behaves, so will he be;
a man of good acts will become good, a man of bad acts, bad;
he becomes pure by pure deeds, bad by bad deeds;

It’s significant to point out, the laws of karma, caused by individual actions, can affect the life you are leading. But what’s also recognized are intentions. They are just as important in your karmic profile and the effect they have on you. Unintentional actions do not have that much influence. Even performing a good deed that stems out of questionable intentions can bring you negative karma.

Karmic theory also recognizes two forms of karma — the phalas and the samskaras. A phala is a karmic effect (visible or invisible) that’s immediate or within your current lifetime. Samskaras, on the other hand, are invisible effects, that are produced inside you, impacting your ability to be happy or unhappy. This extends both to this and future lives.

While the specifics of karma theory differ based on specific spiritual practice, one thing may be for certain – what goes around comes around.

Extreme asceticism: the Jains who starve themselves to death

Jains believe that karma weighs the soul down. This can be overcome through extreme asceticism, in which one slowly withdraws from life.
The Present

Do people even care about data privacy in the digital age?

People appear to have no qualms about sharing their locations, struggles, and relationships online.
The Past

A 5,300-year-old mummy teaches us the global history of tattoos.
Up Next
Neuropsych

While the benefits of music therapy are well known, more in-depth research explores how music benefits children with autism.