Let’s start with a basic fact: relationships are hard.

That fact does not stop a slew of authors from trying to claim the perfect guidelines for relationship and marital success in their books. There is no dearth of relationship advice on bookshelves or during phone calls with friends. Following it is another story, especially for givers of said advice. Add abstinence to the equation, an assault to our biological design, and the results are always thorny.

Joshua Harris is a former evangelical pastor—he left the church he founded, Covenant Life Church, in 2015 to return to collegiate life in British Columbia. He is also the author of a bestselling book credited for defining the evangelical purity movement, I Kissed Dating Goodbye.

After its publication in 1997, Harris’s book went on to sell over a million copies. He has since disavowed some of the advice given in those pages, yet his influence cannot be understated, which is why fans and foes alike are debating the announcement on Instagram that he’s separating from his wife of twenty years.

The amicable breakup is not necessarily newsworthy, but it has left critics of his work dismayed. While his book criticized “secular dating,” stating that relationships should be courtship and promoting the idea of staying “pure” until marriage, Harris has since grappled with the pain his work caused.

The purity movement originated in the nineties. It advocates abstinence; Harris wrote that even kissing before marriage was taboo, part of the means by which secular dating is really training for divorce. The most infamous aspect of the abstinence movement is the purity ring, a ring teenagers wear to show that they’re remaining chaste until marriage. In some denominations, ceremonies are conducted in which young daughters are “married” to their fathers until a suitable suitor arrives.

The author Lyz Lenz is one of Harris’s critics. In a 2016 Washington Post article, she wrote that purity culture creates fear and unwarranted criticism; love becomes what “breaks you instead of builds you.” In an era defined by women’s rights, it harkens back to the long, dark era of male ownership. She writes,

“Purity culture taught me that I ought to be passed down from father to husband, more an inheritance than a human. I was taught that men are my cover and my shield, when for the most part they have been the ones causing damage through molestation, rape and abuse. I was taught that my holy calling was to open my legs for one and only one and bear him children. Barring that, I was to keep them closed and never express desire or lust or fear or longing.”

We can credit Harris for reckoning with his legacy in his rethinking of the book—his publisher discontinued printing it at the author’s request—yet notice that he never actually addresses the damage caused to women by the purity mindset. His admission is shallow even as Lenz and others express the damage being taught to be chattel imprints on their consciousness.

Harris went so far as to make a documentary based on his book, though even that apology comes across as careless. Author Elizabeth Esther criticizes the producers for cutting her interview in the documentary in such a way that didn’t fully express her concerns with Harris’s work. For example, she writes that they completely removed Harris’s dismissal of the LGBT movement during their talk. She also finds his apology unconvincing, writing,

“He’s sorry he hurt people. But not enough to do the actual hard work of making amends. Instead, he made a movie centering…himself.”

As Slate staff writer Ruth Graham notes in an interview with NPR, Harris’s espousal of the “perfect marriage” can be seen for what it is: a guess, and, sadly, a failed one at that. Humans simply are not built to not have sex. As she notes, there is no magic formula for marriage. It’s as specialized and intimate as the individuals involved. 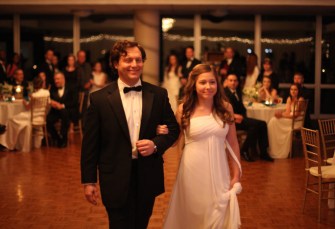 The Purity Ball sees teenagers pledge to their fathers that they will keep their virginity until their wedding night. A 17-year-old has committed herself to America’s Purity Movement, where daughters pledge abstinence to their fathers. Photo: Ruaridh Connellan / Barcroft Images / Barcroft Media via Getty Images

What isn’t helpful, Graham continues, is this eternal struggle the religious have with sexuality. She continues,

“This is just another cause to realize that making premarital sex and abstinence such a major theme of youth culture and youth group culture, specifically, just does not necessarily lead to healthy marriages. It just takes a much more robust and complex sexual ethic and way of talking about sex.”

In his Instagram post, Harris thanks everyone for “respecting their privacy during a difficult time.” We can only think of the privacy of women influenced by purity culture, taught that their “place” is as an accessory to the demands of male biology and temperament. We can hope that Harris has grappled with this fact; perhaps he’ll emerge from his divorce with a more equitable message.

Everyone changes; those that own their changes deserve understanding and, at times, forgiveness. Yet there is another quality, one that has long been important to the Christian soul—humility—that Harris now has to own. It took him nearly twenty years to even listen to critics of his bestselling book. Hopefully, he’ll be ready to listen, really listen, sooner this time around.

Setting resolutions for the new year means you think the future is up to you — but is it?
Thinking

Exorcism: The history of purging demons, from the New Testament to today

The gospels imply that Jesus became famous as much for his exorcisms as his ministry.
Up Next
Starts With A Bang

A representation of the different parallel “worlds” that might exist in other pockets of the multiverse, or anyplace else that theoretical physicists can concoct. (PUBLIC DOMAIN) Just because you can design […]