When did it all start to fall apart? Humans are terrible prophets, though we’re exceptionally skilled in constructing narratives in hindsight. Traumatic instances are burned into memory, essential reference points in the construction of self. We all have an origin story; in that tale darkness must reign before a flicker appears.

Some origins are fabricated, others quite real. New to Los Angeles, Michelle LeClair knew few people when her mother and most recent stepfather moved from her native Oklahoma. She had no reference point for the kiss she would share with her best friend — her female best friend — in high school, so she remained silent. It was the late ’80s and, progressive a state as California is, homosexuality was not broadly discussed. Best to push it down.

Baptized in the Episcopal church, LeClair was not exactly religious; her mother was more seeker than fundamentalist. That would change. Michelle was unaccustomed to the Angeleno cliques; this was the era of “Beverly Hills 90210,” after all. She was just trying to fit in, as was her mother.

Today we wonder how anyone can fall for Scientology. Wasn’t so easy, back then. LeClair’s mother landed a job at Sterling Management, which just so happened to be a pipeline into the church. As LeClair told me,

But her mother was going through her fourth divorce — her latest ex-husband called Scientology a cult — and the community was there for her. And it was there for Michelle when the existential threat of a car accident left her incapacitated. LeClair’s dreams of studying in Paris were thwarted as she became paralyzed with fear of cars. The part-time job at Sterling her mother landed her makes for a convenient origin story.

Or maybe it was the minister who attended to her in the hospital, or perhaps later when she was audited in his dingy apartment. LeClair’s mother told her to overlook his disheveled dress and dirty environment. They were being indoctrinated by the idea that the body is to be fought against, not honored; picking up on social cues was considered judgmental. Turn away that critical eye. Dress and home are not the true nature of the Thetan. Besides, he was a warm and caring man. Focus on that.

I remember sitting down with him, really nervous that I was picking up these weird looking cans with electrodes on them. I think he could tell how nervous I was in this tiny little dirty office and he just looked at me with these kind eyes and said, ‘Tell me about a problem that you’re having.’ I was so desperate to talk. I said to him, ‘I’m scared, I don’t know what I’m going to do with my life. I’m scared of everything right now. And I don’t know why I got into an accident that I should have died from and I don’t know why I’m sitting here with you right now.’ His answers were that we believe in Scientology, that everything, all accidents and illnesses, happen when you have somebody in your life that is suppressing you, stopping you from doing what you want to do in life.

And then there was light. 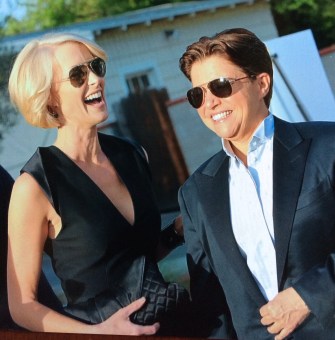 Only, not really. LeClair was nearly ostracized a few years later when admitting to her lesbianism. The “very slow brainwashing and indoctrination” had taken hold. Her mother had paid for her first few sessions, including her 19th birthday present, but now she was all-in — the total she’d donate to the church in the coming decades was $5 million. Their response to her sexuality seems more voyeuristic than theological:

The Scientology Ethics Department had Hubbard’s writings on homosexuality at the ready. Lesbianism, he writes in Dianetics,is responsible for the downfall of society — in the same category as sexual perversion and bestiality. In Hubbard’s imagined emotional scale — the “charter of human evaluation” — homosexuality places you among the sickly and criminals.

How long to focus on this biography? How long does anyone remain controlled by fear and persuasion, falsities and threats?

A lifetime, for some. But not LeClair. She was in upper management at her price point, a business partner with Kirstie Alley, a spokesperson for Tom and Katie. To hide her sexuality she married a man who turned out to be abusive. A son was born. Then LeClair adopted an African-American daughter, Savannah, which sent him into a rage. Her twin boys were the result of him raping her, for which she was told the rape was her fault.

The backdrop for our interview: a president mocking a woman for not coming forward after her own story of abuse, her own origin mythology. A millionaire by 8, this president has never confronted such a story; he’s accused of creating his own. He’ll never be told everything is his fault, or believe it if he is. LeClair was built of more compassionate material.

This spiral of everything that’s happening to me is my fault. It’s my fault and it takes you right back to that moment of looking at those charts and reading quotes and thinking, ‘I’m a bad person. Okay, I’m going to be a better wife. I’m going to try this time.’ You get to a point where you close off and think — and any victim can tell you this — there is a side of you that in order to survive, you have to close that off.

Out former Scientologist Michelle LeClair on leaving the organization

We draw meaning from words, yet before language sound indicated mental states. You can learn a lot about a person from their breathing. When I mention the Kavanaugh trial LeClair’s exhale writes a novel. I mention the women defending the judge, the “white male victim.” She offers caring instead of disdain.

I feel sorry for them. I think that there is brainwashing from the way they have been brought up. I don’t know who taught them that boys will be boys — probably their parents. And it is very sad to me because I have three boys and I love them with all my heart, but I remind them on a constant basis how gentle and kind that they need to be to women, not only to women but to every human being, that no amount of violence is ever okay.

As Steinbeck brilliantly displayed in East of Eden, origins beget origins. There is never closure, only continuation. And change. During her loveless marriage, LeClair was seated across from a lesbian couple at a party that just happened to be their neighbors. In her gated existence she didn’t even know her surroundings. She spent the evening discussing the challenges of being a Southerner in California with one of these women. A veil was lifted — this was no sexual deviant. Another origin story commenced. Even though LeClair lost contact with her for years, today they’re madly in love.

We could continue discussing the origins and twists and turns of LeClair’s life, though you can also read it in her new memoir, Perfectly Clear: Escaping Scientology and Fighting for the Woman I Love. Though my origin story is a world removed from LeClair’s, I was struck by how kindhearted this woman is during the hour that we spoke. Physical abuse, emotional abuse, violence, rape, the church bankrupting and stalking her, and never once was her voice raised, nor did she talk negatively. She’s turned disaster after disaster into victory. She accomplished the hardest task a victim of trauma is faced with: she rewrote her narrative.

Which is why I had to ask: Do Scientologists really believe in Thetans? When she replies “yes,” it’s my gasping breath revealing my mental state. LeClair, however, it is quite clear, is no longer one of them.

It sounds fucking insane and it totally is. But when you’re sitting there and you’ve had years of making up all of these paths, life stories and situations, it doesn’t sound so crazy when he gives you that reason, and now you’ve got to fork over another $50 grand to get rid of all of those beings that have been attached to you. So yes, many Scientologists believe that — yes, yes, yes. And I believe not one stitch of it today. I can assure you.

This map of Hutterite colonies in North America says something about religion and evolution — and more precisely, speciation.
Up Next

As Mortgage Fraud Spikes, Lenders Turn To AI For Help

The latest advances in technology have led to revolutionary changes in almost all parts of modern life. The rise of the internet, in particular, has enabled an uncountable number of […]