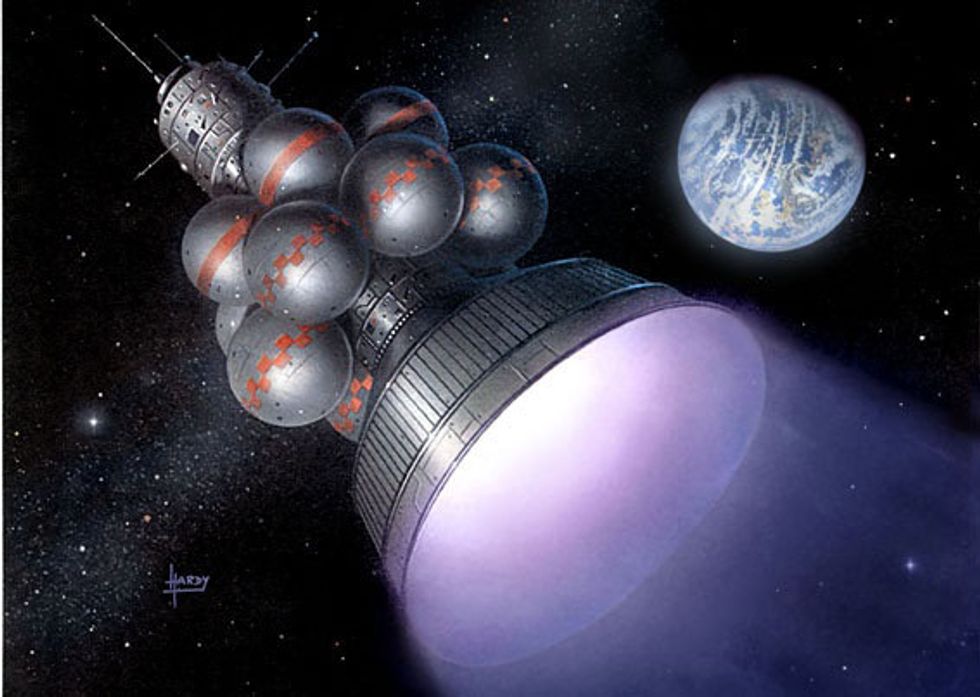 50 years ago today, President John F. Kennedy delivered his famous speech at Rice University challenging America to send a man to the moon within a decade. If Kennedy were alive today, he would probably be amazed at the audacity of a new project that is light years more ambitious: DARPA's 100-Year Starship Initiative, which aims to make human space travel beyond our solar system possible within 100 years.

To get this project off its feet, the non-governmental organization 100 Year Starship is hosting a public symposium in Houston this week, from Sept. 13 through Sept. 16. Bill Clinton has signed on as the event's honorary chair.

"The moon is the first milestone on the road to the stars."
- Arthur C. Clarke

If you think that interstellar flight is the stuff of science fiction, you have good reason to. After all, the distances needed to be covered are difficult to even comprehend. The closest star outside of our solar system, Proxima Centauri, is 4.2 light years away. That means it would take over four years to get there traveling at the speed of light, or approximately 186,000 miles per second. We can't go that fast. The journey would take what is currently our fastest spacecraft, Voyager, about 80,000 years.

That's obviously not a realistic time scale for a manned interstellar flight. So what should we aim for? A 100-year journey -- representing something closer to a human lifetime, rather than many generations -- is obviously a more reasonable goal for such a mission. Others who argue against manned missions say the decision should be governed by the growth rate of technology, and not be bound by the human lifespan at all (machines could always build custom humans in an alien environment, anyway). And so the technology-driven argument for unmanned starships goes like this: how many Voyager-type crafts do you want to send out there, lumbering along at only 35,000 mph, only to be passed by a faster craft in 50 years?

This debate underscores the monumental nature of the challenge, which will require dramatic innovation in various sectors, from energy generation and propulsion systems to AI and robotics to life-support systems and an advanced understanding of human health and development.

To this end, DARPA has provided seed funding for "a viable and sustainable non-governmental organization for persistent, long-term, private-sector investment into the myriad of disciplines needed to make long-distance space travel possible."

Like Apollo, there could be numerous earthly benefits from breakthroughs in the fields mentioned above. And it is certainly heartening to space exploration advocates that a politician as prominent as Bill Clinton is publicly touting those benefits. "This important effort helps advance the knowledge and technologies required to explore space," Clinton said in a statement, "all while generating the necessary tools that enhance our quality of life on earth."

Beyond those worldly rewards, interstellar travel is essential if we hope to contact or even cohabitate with other intelligent life. There are currently over 800 planets identified as Earth-like candidates outside our solar system. What good is the SETI mission if all we can do is offer a distant wave to another civilization?

If we are to actually become an "interstellar civilization," we will need to make advances in many other fields as well, such as philosophy and ethics (we're talking about a one-way trip, after all). The Houston symposium plans to tackle these big issues in a multidisciplinary framework. They will also need to answer the question of how to plan an unprecedented 100-year project and set the right research priorities? More short-term goals include securing investors and getting the word out to the public. The presence of LeVar Burton from Star Trek won't hurt.

In the meantime, we're interested to get the chance to review the engineering ideas that will be showcased at 100YSS. The winning proposal to DARPA was submitted by The Dorothy Jemison Foundation for Excellence along with interstellar hardware developer Icarus Interstellar.

This public symposium should also be an opportunity to dust off other science fiction-sounding concepts such as the so-called "space elevator." Dr. Michio Kaku says such a concept is within the laws of physics, and could be possible within 100 years given the enormous progress we are making with carbon nanotubes and graphene. Dr. Kaku explains: