Chinese officials recently confirmed that a new SARS-like virus is capable of human-to-human infection. The virus has killed at least six people so far and has left nearly 300 more sick.

Wuhan, where the virus was first detected, has canceled its upcoming Lunar New Year celebration over concerns about the hundreds of thousands of visitors that would visit the city and potentially spread the virus to other parts of the world.

The virus has already begun to spread — the respiratory illness has been detected in Beijing, Shanghai, and Shenzen, as well as in Japan, Thailand, South Korea, and Taiwan. Recently, the Centers for Disease Control and Prevention (CDC) confirmed that the virus has appeared in the U.S. as well. A male traveler in Snohomish County, Washington state, reached out to local health facilities after he began presented pneumonia-like symptoms on January 15th.

The spread has also been encouraged by the less-than-rapid response from the Chinese government, which only began checking travelers’ temperatures on January 14th despite learning of the virus in mid-December. Furthermore, millions of visitors are expected to travel to China for the Lunar New Year, presenting an opportunity for the virus to spread even further. 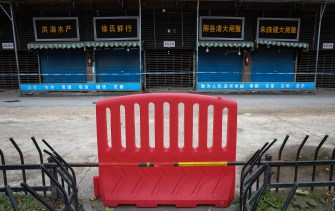 A photo of the closed Huanan Seafood Wholesale Market in Wuhan, which has been linked to several cases of the coronavirus.

The virus resembles SARS (severe acute respiratory syndrome), which killed 774 people in 2002 and 2003 across several Asian countries. Like SARS, the new virus is a coronavirus, so-named because of the bulbous projections encircling the viroid that resemble a royal crown or a solar corona. The Wuhan coronavirus, dubbed 2019-nCoV, appears to be an entirely novel strain that has not been detected in humans before. Scientists believe that the virus’s primary source was an animal, but it is clear now that the virus is capable of spreading between humans, causing fever, shortness of breath, a cough, and other respiratory issues.

There is evidence to suggest that the disease could be highly infectious as well; one patient is believed to have infected 14 medical professionals in the hospital where they were being treated. 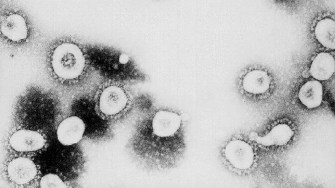 Handout photo from the Centers for Disease Control and Prevention (CDC) shows a microscopic view of the coronavirus. According to the CDC.

China’s and the WHO’s response

Although some have criticized the Chinese response as being sluggish, it has acted far more quickly than it did during the 2002 SARS outbreak. After the SARS virus first appeared, the Communist Party of China discouraged state media from reporting on the virus and delayed in reporting information to the World Health Organization (WHO) for months.

That being said, there is some concern that the Chinese government is underreporting the figures associated with the disease. In an interview with CNN, researcher Neil Ferguson claimed that the number of cases outside of China suggest that more individuals are infected than is being reported. “We calculate,” he said, “based on flight and population data, that there is only a 1 in 574 chance that a person infected in Wuhan would travel overseas before they sought medical care. This implies there might have been over 1,700 cases in Wuhan so far.”

“There are many unknowns,” continued Ferguson, “meaning the uncertainty range around this estimate goes from 190 cases to over 4,000. But the magnitude of these numbers suggests that substantial human-to-human transmission cannot be ruled out. Heightened surveillance, prompt information sharing and enhanced preparedness are recommended.”

The WHO plans to convene an emergency committee on January 22nd to determine whether the outbreak can be considered a public health emergency of international concern, or PHEIC, which is defined as “an extraordinary event which is determined to constitute a public health risk to other States through the international spread of disease and to potentially require a coordinated international response.” A similar determination was made regarding the 2002 SARS outbreak.

Under international health regulations, the declaration of a PHEIC requires states to respond quickly to the emergency. While it is characterized as a last resort, declaring a PHEIC in and of itself offers the WHO few powers beyond the ability to form an advisory emergency committee on the crisis.

Given that Wuhan is a city of 11 million people and that the virus has already spread beyond China’s borders, such a declaration seems merited. With a PHEIC in place, hopefully the WHO will be able to work with the Chinese government to minimize the spread of the disease prior to the upcoming Lunar New Year. 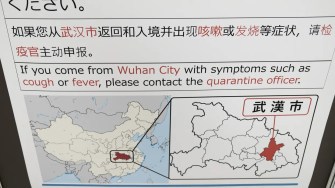 A notice for passengers from Wuhan, China is displayed near a quarantine station at Narita airport in Japan. Japan’s Ministry of Health, Labour and Welfare recently confirmed its first case of pneumonia infected with a new coronavirus from Wuhan City, China.

Getting started with easy-to-follow instructions and coursework is essential, and that is exactly what you’ll find in The Ultimate Adobe CC Training Bundle.