No matter what side of the political spectrum you’re on, there is bound to be someone complaining about how the other side is horrible or they’re slanderous liars. This vitriol and heart felt damnation for the other team is nothing new. In politics we’ve always tended to group together with other like-minded individuals even in the event that it goes too far.

Recent research out of Cornell proposes that we really aren’t that adverse to lying as we proclaim to be. Especially if the lies told benefit our side or whatever group we propose to belong to.

Comedian George Carlin once quipped that, “If honesty were suddenly introduced to politics, it would throw everything off — the whole system would collapse.”

Carlin said this during the Clinton administration and as you might have guessed it, things haven’t changed much… Lies, untruth or whatever doublespeak the holier-than-thou crowd wants to fling at their opposing side need to realize one thing — they’re all liars to some degree. 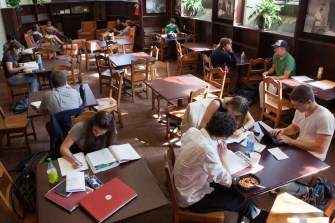 Merits of the dishonesty study

Angus Hildreth, Cornell’s management professor, set up an experiment to explore the tumultuous relationship between truthfulness or lackthereof and loyalty. Hildreth and his team selected groups of random students, fraternity brothers and other volunteers then asked them to solve a number of puzzles and word games.

The rules of the game were simple. If the team performed well on these tasks, then the whole team would make more money.

Throughout the study, the team was encouraged and often felt righteous about their lying in the event that it benefitted themselves and their group.

Political takeaways from the study

Researchers felt that loyalty was the cause of a lot of political corruption. They stated that:

But at the same time loyalty is a fundamental and ethical principle, which drives a lot of our behavior. Even so, the results and hypotheses proved that it was an implicit factor when it came to lying.

Across nine studies, we found that individuals primed with loyalty cheated less than those not primed (Study 1A and 1B). Members more loyal to their fraternities (Study 2A) and students more loyal to their study groups (Study 2B) also cheated less than their less loyal counterparts due to greater ethical salience when they pledged their loyalty (Studies 3A and 3B). Importantly, competition moderated these effects: when competition was high, members more loyal to their fraternities (Study 4) or individuals primed with loyalty (Studies 5A and 5B) cheated more.

Competition, which is the name of the game in the political realm, will always breed lying discontent between factions.

Some of these trends may be due, in part, to the lockdown.
Up Next
Surprising Science

The eruption quickly killed those caught in its intense wake.