As Rex Tillerson, former CEO of ExxonMobil, underwent the confirmation process to become the next U.S. Secretary of State, a telling detail to the story involves one of the country’s most famous families. Some of the Rockefellers have been involved in a public battle with ExxonMobil concerning the oil and gas giant’s record on climate change. A major note of historical irony here is that their ancestor, the legendary industrialist John D. Rockefeller, founded Standard Oil which eventually turned into ExxonMobil.

John D. Rockefeller was the richest person in America’s history and likely the richest person in modern history. He was a larger-than-life figure, who used his massive fortune for philanthropy, founding several universities and sponsoring medical research that minimized diseases like yellow fever.

After Standard Oil was broken up in 1911 by the U.S. government for being a monopoly, the spinoff companies that were formed have become some of today’s most important oil powers – ExxonMobil, BP, and Chevron. ExxonMobil, however, is the largest direct descendant of Standard Oil.

The Rockefellers of today have a combined fortune of $11 billion and are the 23rd richest family in the U.S. While their fortune was made in fossil fuels, they have led a decades-long effort to get ExxonMobil to address climate change. Some of the Rockefeller descendants have funded research on ExxonMobil using independent journalists, which claims to have found that the company knew about climate change for a long time but chose not to act upon it.

In 2016, the Rockefeller Family Fund announced that it would divest holdings from fossil fuel companies. They would do so over time except in the case of ExxonMobil which was singled out “for immediate divestment because of its morally reprehensible conduct.”

They blame the company for actively fighting to discredit scientific research into the issue of climate change. David Kaiser, a fifth-generation descendant of John D. Rockefeller, published an article outlining some findings of their investigation, showing extensive lobbying efforts by ExxonMobil against the Kyoto Protocol treaty. The findings also allege successful efforts by the company to lobby Vice President Dick Cheney and President George W. Bush to replace government-related scientists who believed in climate change with skeptics. 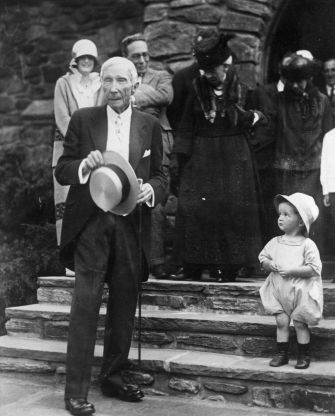 In the interview with CBS This Morning, David Kaiser and Valerie Rockefeller Wayne, another fifth-generation descendant, discussed their position on ExxonMobil’s actions. Kaiser called ExxonMobil “morally bankrupt”, while Wayne attributed their speaking out to an issue that is doubly important in light of their family’s history.

“Because the source of the family wealth is fossil fuels, we feel an enormous moral responsibility for our children, for everyone — to move forward,” she said.

One example of the position ExxonMobil has taken over the years on climate change is in the quote by its former vice president Frank Sprow:

“This is complicated. Don’t believe statements that say it’s clear that things are warming. It’s not clear,” he told CBS News in a 2000 interview.

Wayne and Kaiser want to influence the company to confront its role.

‘What we would hope from Exxon is that they would admit what they’ve done – these decades of denial – and continue what they’ve started in a very small way to do now, which is to look at alternatives and we really hope they become an industry leader,’ Wayne said. ‘They can set the tone for the industry in doing more, but the truth has to come out,’ she added.

Here’s a helpful map if you want to keep track of the Rockefeller family tree: 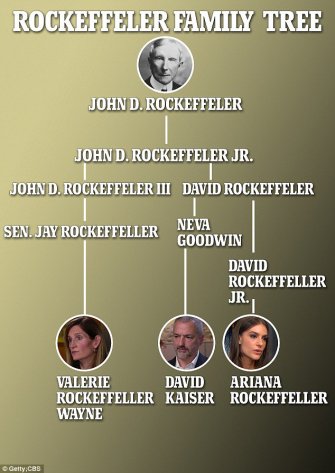 ExxonMobil has acknowledged publicly that climate change is real and claims to be spending billions on lowering greenhouse gas emissions. The company is, however, currently embroiled in fighting fraud investigations from New York and Massachusetts over whether it misled the public with regards to how much it knew about the climate situation.

The company has hit back at the Rockefellers, accusing them of plotting a conspiracy against ExxonMobil. Their official told CBS News that these kinds of public attacks on them are part of a “coordinated campaign… to vilify the company.”

Another family member, Ariana Rockefeller, Kaiser’s cousin, also spoke out against her relatives.

“These family funds do not speak on behalf of all 200 family members,” she said, referring to the funds that conducted the research into ExxonMobil, adding “I don’t think denouncing a family legacy is the best way to go about doing this.” 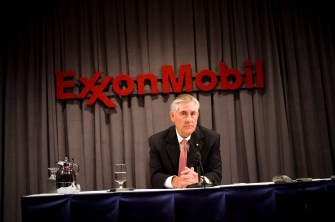 For his part, Rex Tillerson said in the confirmation hearing that he does believe in climate change, but did not state that humans are responsible for it, pointing out that there’s a lot we don’t understand. As CEO, he actually had a clash with the Rockefellers in 2008, when they tried to take away one of his jobs during several shareholder votes. They wanted the company to address climate change while Tillerson defended the company’s existing efforts, stating that “a lot of climate change policy is still up for debate”.

“This is much deeper than just ‘let’s figure out how we can get both sides to get along.’”
▸
15 min
—
with
Ian Bremmer
Videos

Eugenics is bad – but understanding DNA is good.
▸
4 min
—
with
Kathryn Paige Harden
Up Next
Life

Descartes’ solitary, inward-facing mindset misconstrues the social nature of our thinking. Social Cartesianism better captures the soul of what matters in distinguishing humans from animals or machines.