The world was pretty unstable one hundred years ago. The Spanish flu was decimating global populations already ravaged by the first world war, revolutions had broken out across the world, and many people were unable to reconcile their wartime experiences with their pre-war values. For many people living at the time, it would have seemed like the world, already beaten down by the most destructive war in human history, was coming apart at the seams.

Amidst all this chaos was a significant strike that left an American city unable to function and largely under the control of a worker’s committee. While the strike was limited, it offered a vision and an experience of workers running a city that both inspired and terrified Americans.

In February 1919, most of the various trade unions of Seattle voted to begin a general strike. Ostensibly in support of striking longshoremen, the decision was also motivated by a desire to demonstrate the power of labor in the city and a history of radical trade unionism in the region. Despite the fears of the upper classes, there were no secret revolutionary goals behind these motivations.

For those who don’t know, a general strike is a strike that involves many workers from various industries all walking off the job at once. The modern history of these strikes goes back to the dawn of the Industrial Revolution, but a similar tactic was used by the ancient Romans to force the ruling classes to attend to the needs of the working class. Such strikes are still used to this day by some unions, albeit sparingly.

At 10:00 on Thursday, February 6th, 60,000 workers walked off the job. Another 40,000 workers were at home in anticipation of an inability to do business. The city would be paralyzed for five days. 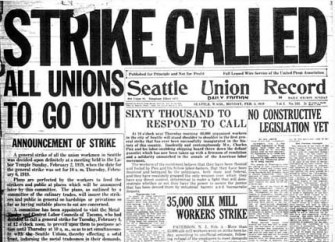 ​The announcement of the strike by the union’s newspaper ​The Seattle Union Record.

What was it like to live there during the strike?

Despite fears of revolution so great the national guard was called in; the city was orderly during the strike. The city police chief reported that the number of cases to be tried immediately fell from the typical 100 per day down to 30. Rumors of violence were unfounded, and the enduring fear that the city would starve or decay into riots was shown to be hysterical. Not one striker was arrested on any charge related to the strike for the duration.

An executive committee of labor leaders managed the affair. Given how much this committee was doing, it decided what business could operate during the height of the strike by means of passing exemptions for union workers who were otherwise bound to stay home, and its pro-labor nature, it is sometimes said that Seattle was run by a “soviet” – which means “worker’s council”- during the strike.

While this statement is somewhat overblown, it isn’t entirely without merit.

Essential services continued to operate in the city with the approval of the executive committee. Trucks that wished to run during the strike had to bear a sign indicating they had been exempted. Laundry shops stayed open to wash whatever the fully operational hospitals sent them, but their workers would do no other business. To make up for the lack of open restraints during the strike, the unions ran dozens of cafeterias and soup kitchens selling meals for 35 cents. Three dozen milk stations were set up and run by the unions to supply milk to the population.

If this sounds like the workers running the economy to you- socialism as they call it-it kind of was. Though some might prefer to call this model “anarcho-syndicalism” for various reasons. Some of the propaganda at the time implied that one of the goals of the strike was to “teach the workers how to manage businesses themselves.” Given that the cafeterias feed 30,000 people on the last day of the strike, it seems they reached this goal.

In all their excitement to plan the strike, the various committees forgot to make demands or state conditions the workers sought as a prerequisite to returning to work. They also, foolishly, shut down the union run newspaper; preventing them from getting out their message during the strike when anti-union papers were still running.

They also did a poor job at keeping the more radical and overly enthusiastic members on a short leash, and several editorials and pamphlets were published before and during the strike that made it seem like the goal was a socialist revolution. This turned popular opinion against the strikers and ended any chance at getting a good deal in exchange for returning to work.

Ultimately, without a series of demands or much of a plan on how to either hold out indefinably or force the city to give in the strike began to fizzle. Many workers returned to their posts after only three days, and the strike was called off on day five. The longshoreman strike- the one the general strike was supposedly in sympathy with- carried on.

According to author Robert L. Friedheim’s book The Seattle General Strike, that question remained unanswered in 1964. As he put it:

“Only the first day of the strike-before the troops arrived- is an adequate measure of labor’s conduct without the threat of reprisal; and that first day was a day of exuberance. Later days, when labor realized that shutting down the city would not bring victory, would have been a truer test; but then the army was present. Nevertheless, labor’s peaceful record is still most remarkable, considering the provocations by the city government which might have led to unplanned outbreaks of violent strife.”

He does point to the Winnipeg General Strike a few months later and its orderliness over six weeks as evidence that there was no reason to suppose the Seattle strike was doomed to decay into anarchy, but also mentions the Canadians put more planning into their strike than the Americans did.

In any case, the strike can and has been used both as an example of how orderly a union run city can be and how to put an end to what looks like a Bolshevik revolution.

How did it turn out afterward?

The actual results of the strike were semi-disastrous for the unions that voted to walk out.

The mainstream labor unions alienated many of their progressive, upper-middle-class supporters. In 1920 a well-respected labor leader ran for mayor and was crushed by voters who no doubt remembered the strike while they cast their ballots.

The business community of the city, which had been toying with the idea of breaking up the closed-shop system, began to do so in earnest after the failure of the strike. This was made all the easier by infighting between the various unions and between factions within each local erupting afterward over the failure.

Thirty-one members of the anarcho-syndicalist IWW were arrested for leading the strike shortly after the strike ended. Given that the IWW didn’t lead it, only one of them made it to trial and was eventually acquitted. This minor detail didn’t stop the city of Seattle from clamping down even harder on the Wobblies than they already been. Most of the IWW members in Seattle would slowly drift away anyhow, as the industrial boom provided by the world war fizzled out during the 1920 recession.

The popular conception of the strike as an aborted Bolshevik uprising helped touch off the 1st Red Scare, during which many leftists were deported or arrested. Seattle’s mayor Ole Hanson was even able to resign and make a fortune on the lecture circuit speaking as the mayor who “suppressed a revolution.” His popularity was briefly so great as to give him delusions of being nominated for president in 1920.

On the positive side, the unions did, if nothing else, succeed at demonstrating how important they were to keeping the city running by paralyzing it during the strike.

While the Seattle General Strike is mostly forgotten and accomplished little, it lives on in the memories of both the wilderness dwelling members of the American left and those on the right that see Lenin’s specter lurking behind every corner. It offers us an example case of how a major American city can be run with methods somewhat similar to those used to run Catalonia during the Spanish revolution.

It also gives us the advice that before you shut down a city, you might want to finish drawing up your plan first.

Two mounds of rice and a tiny flag in a sea of curry is enough to re-heat an old territorial conflict.
Up Next
The Present

North Korea's Great Leader would rather not fly for his second summit with Trump – but the trip is also a political message to China.